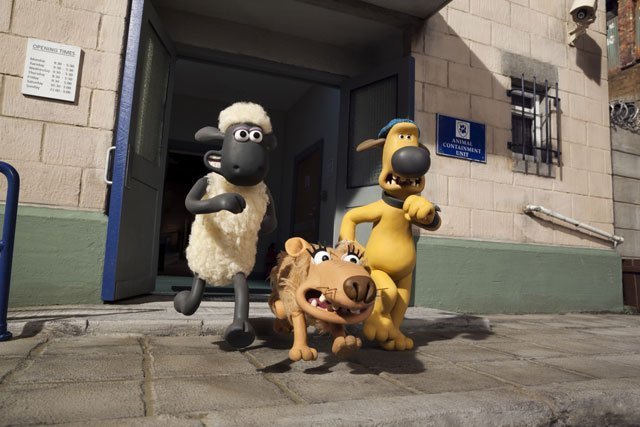 Animated characters Shaun, Slip and Bitzer appear in "Shaun the Sheep Movie." The Catholic News Service classification is A-II -- adults and adolescents. The Motion Picture Association of America rating is PG -- parental guidance suggested. Some material may not be suitable for children.

NEW YORK (CNS) — "Ewe" are bound to have fun watching "Shaun the Sheep Movie" (Lionsgate), an endearing — and pun-filled — animated feature about the madcap adventures of a woolly English flock.

The inventive, stop-action comedy is created by the master clay-crafters at Aardman Animations. They’ve previously given us the "Wallace & Gromit" films as well as 2000’s "Chicken Run."

Unusually for a full-length title, "Shaun" is dialogue-free. The cuddly sheep baa and bleat; the mindless humans grunt and growl. But no words are spoken.

Remarkably, none is needed for an entertaining movie that, some questionable jokes aside, makes suitable viewing for most of the family.

The eponymous hero (voice of Justin Fletcher) was introduced in the 1995 "Wallace & Gromit" short "A Close Shave" and went on to star in a British TV series of his own that launched in 2007.

Shaun lives with his fellow livestock on Mossy Bottom Farm, where the daily routine is mind-numbingly dull and monotonous. The owner, known simply as "the Farmer" (voice of John Sparkes), suffers from severe myopia and extreme cluelessness. Nonetheless, he runs a tight ship, with his trusty sheepdog Bitzer (also voiced by Sparkes) by his side.

Even sheep deserve a day off now and then, though. So Shaun plots with his flockmates to go rogue after coaxing the Farmer back to sleep (by counting sheep, of course) in his camper-van bed. Sedation successful, the domesticated lambs go wild, watching TV, eating junk food and playing games.

The rollicking good times come to an end when Bitzer gets wind of the high jinks and attempts to restore order. But in his haste to wake the Farmer, Bitzer inadvertently sets the camper in motion. The vehicle rolls down a hill and onto the main road, headed inexorably toward the far-off Big City.

Aghast at the sudden absence of their source of food and shelter, the occupants of the barnyard must rally round and mount a rescue operation. Shaun and his buddies don disguises as they catch the next bus bound for the urban jungle.

Once there, the real fun begins as the human and sheep worlds collide in such places as "Le Chou Brule," a stuffy French restaurant whose absurd name means "The Burnt Cabbage."

Further complicating matters are the Farmer’s amnesia, the result of a blow to the head, and the wicked ways of an animal warden named Trumper (voice of Omid Djalili).

Co-writers and co-directors Mark Burton and Richard Starzak prove themselves adept at clever Chaplinesque sight gags and routines in what is essentially a silent movie. Still, a few audible pleasures are in store, including a tuneful "baa-bershop" quartet.

The film contains some rude bathroom humor and vague innuendo. The Catholic News Service classification is A-II — adults and adolescents. The Motion Picture Association of America rating is PG — parental guidance suggested. Some material may not be suitable for children.