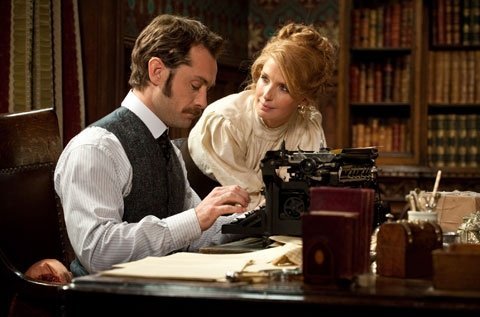 NEW YORK (CNS) — "Sherlock Holmes: A Game of Shadows" (Warner Bros.), director Guy Ritchie’s second take on the classic detective fiction of Sir Arthur Conan Doyle, follows the pattern of its predecessor as it downplays old-fashioned sleuthing in favor of a constant flow of confrontations, escapades and escapes.

While the fast-paced proceedings ought to be off-limits for youngsters, adults with a high degree of tolerance for stylized violence will likely find them diverting enough.

This time out, it’s 1891, and Robert Downey Jr.’s he-man Holmes is on the trail of his ultimate adversary, evil genius par excellence Professor James Moriarty (Jared Harris). For reasons that only gradually become apparent, Moriarty is conspiring to destabilize European politics and bring on a general war.

That’s bad news for Holmes’ recently wed sidekick Dr. Watson (Jude Law), the chronicler of the great man’s exploits, and for his bride Mary (Kelly Reilly), since their honeymoon trip is violently interrupted by Moriarty’s machinations.

The tension between the two long-standing collaborators over Watson’s marriage plans was a major theme of Ritchie’s previous film. Here, Holmes’ unspoken jealousy over his friend’s prospects for domestic bliss continues to smolder, as too does his fear of abandonment.

As portrayed by husband-and-wife screenwriters Michele and Kieran Mulroney, these emotions entail — or are at least accompanied by — some vaguely homoerotic humor. At one point, for instance, Watson tussles with a drag-disguised Holmes, and the two end up in a position that could easily be mistaken for a clinch of a different kind.

Watson’s nuptials, and Holmes’ ongoing interest in femme fatale Irene Adler (Rachel McAdams) suggest, though, that these incidents are not to be taken as anything more than comic fluff, along the lines of director Billy Wilder’s 1959 cross-dressing romp "Some Like It Hot."

As their struggle with Moriarty leads them from London to Paris to Germany and eventually on to Switzerland, the iconic pair is aided by a Gypsy fortuneteller named Sim (Noomi Rapace) and by Holmes’ bon vivant older brother Mycroft (Stephen Fry).

Mycroft’s eccentricities become the occasion for another scene of adult humor when he is shown to be quite uninhibited about wandering around in his birthday suit, much to the blushing confusion of other characters. Only as much of his physique is shared with the audience, however, as might be seen on a loose-belted plumber.

The fist fighting and gunplay that take up so much of the film’s running time reach a climactic crescendo when the inventory of a munitions factory is employed both by and against our heroes.

This is in keeping with another of the movie’s themes — namely, that Moriarty’s efforts to ignite a worldwide conflict foreshadow the doom-laden real-life events of 1914. But it’s also the clearest signal yet that, despite its venerable source material, this is not a family-oriented offering.

The film contains constant action violence, including a suicide, torture and some glimpses of gore; partial rear and implied full nudity; fleeting sexual humor; and a few crass terms. The Catholic News Service classification is A-III — adults. The Motion Picture Association of America rating is PG-13 — parents strongly cautioned. Some material may be inappropriate for children under 13.