She's Out of My League - Catholic Courier 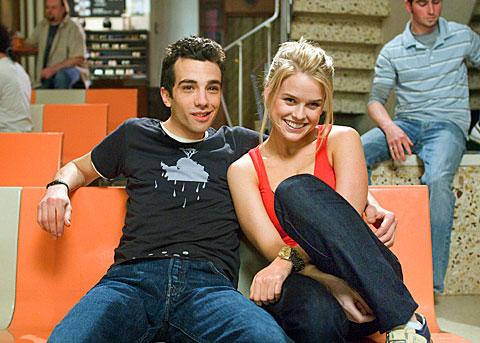 Jay Baruchel and Alice Eve star in a scene from the movie "She's Out of My League."

NEW YORK (CNS) — A seemingly unlikely romance between a nerdy but good-hearted man and a fetching, sophisticated young woman could be the basis for a film exploring worthwhile themes such as the need to reject stereotypes and the value of basing lasting attachments on the appreciation of personal, rather than merely physical qualities.

In the raunchy romantic comedy "She’s Out of My League" (Paramount), however, this premise becomes the launching pad for a barrage of sophomoric antics and frequently distasteful sight gags.

As scripted by Sean Anders and John Morris, and directed by Jim Field Smith, this is the tale of awkward, self-doubting Pittsburgh airport security agent Kirk (Jay Baruchel) whose life and romantic prospects are in limbo until he accidentally manages to attract the interest of comely party planner Molly (Alice Eve) when she leaves her cell phone behind while passing through his checkpoint, and he goes out of his way to return it to her.

On the rebound from her last relationship with her dashing but insufferably egotistical ex-boyfriend Cam (Geoff Stults), Molly appreciates Kirk’s Boy Scout-like politeness as well as his quirky, self-deprecating sense of humor.

But Kirk’s doubts that Molly could actually be attracted to him are reinforced by the cynical nay saying of his three slacker best friends and co-workers, Jack (Mike Vogel), Stainer (T.J. Miller) and Devon (Nate Torrence), who reduce all interaction between the sexes to a set of mathematical formulas whereby a "hard 10" like Molly couldn’t possibly fall for Kirk, who is, they calculate, barely a "5.’

Also rooting for Kirk to fail is his ornery ex-girlfriend, Marnie (Lindsay Sloane).

Kirk’s effort to make himself more sexually appealing by shaving a part of his anatomy well south of his chin — an endeavor in which he fails on his own and has to accept the supposedly comic help of one of his trio of buddies — and a scene where he becomes overexcited during the preliminaries of an encounter with Molly, only to have her parents arrive unexpectedly, typify the cringe-inducing version of comedy that prevails throughout.