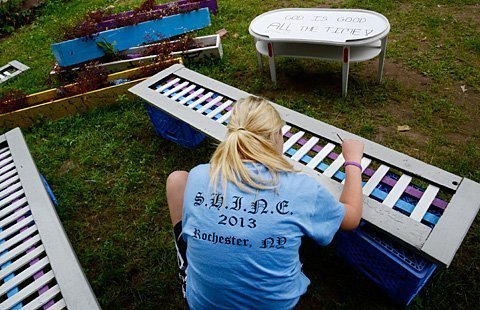 A SHINE Work Camp volunteer from Wisconsin paints a lattice fence for a house on Norton Street in Rochester July 12.

ROCHESTER — As the warm sun beat its rays down on teenagers who were helping to repaint a porch on a Norton Street home, those teens broke out in a chorus of "Somebody to Lean On."

The music died down and one teen pondered out loud whether she should paint "God is good" bigger than "all the time" on the side table she was decorating.

The teens were taking part in the SHINE Work Camp in Rochester July 8-13. SHINE stands for Serving Him in the Needy and Elderly.

"Last year we were in Joplin, clearing a farmer’s field," Lieburn said, referring to the Missouri town that was devastated by a tornado in 2011.

This year in Rochester, the young people — and even the bus driver who drove them from Wisconsin — were helping to repaint a historic house known as Casa della Madonna della Strada (House of Our Lady of the Streets), transitional housing for chronically homeless women that is operated by the group Friends of St. Bridget’s.

By working with Catholic Family Center, the program, which has only been operating since May 17, has been able to connect women with the services and the help they need, said Gerry Clark, a volunteer with Friends of St. Bridget’s. Clark said there is typically a 90-day waiting period for a mental-health evaluation, but those without homes often can’t stay in a location that long, which creates barriers to them receiving the services they need. That is why the women are allowed to stay indefinitely in the transitional housing, he said.

There was much work to complete on the home. Clark said the home, built in 1834, was the third home constructed on Norton Street, but it had fallen into disrepair before the group took possession of it this past December. The women moved in May 17.

"The copper (pipes) had been stolen and all kinds of stuff," Clark said. "We’re restoring the house."

"It’s a work in progress," added Annette Stanford, a member of Friends of St. Bridget’s and a staff member at Casa della Madonna della Strada. "We won’t get it done this week, but we will get it done."

Just as volunteers are seeing progress in the house, Stanford said she has seen leadership and growth from the four residents in the short time that they have lived at the home.

"Our girls are very unique," Stanford said. "One of the girls came to me, and she arranged a clean sweep (trash pickup) in the neighborhood."

Since then the residents have also gotten involved in starting a neighborhood block club.

Growth experiences also were the aim of the SHINE campers, who were part of more than 100 campers who spent the week in Rochester celebrating, worshipping and serving.

"All of these people, whether you know them or not, want to be friends," said Bronson Bero, 17, of Oconto Falls, Wis. Bronson will be a senior in high school next year. "You want to work with them; share with them. It’s such a fun time. It’s so powerful spiritually that you can’t say no if they ask you."

Amy Nasgovitz, 18, who will be a freshman in college in Wisconsin in the fall, said it was her fourth year participating in SHINE. She had first heard about it from her older brothers.

"It makes you really strong in your faith," Nasgovitz said. "It makes you feel good, so you keep coming back because you want to have that feeling all the time."

Clark said he hoped that SHINE would be able to return next year and that parishes from the Rochester area would be able to send participants as well. This year Ibero-American Action League funded spots for four Rochester-area teens to participate in the work camp, he said.

"This is the first time we have had kids from Rochester," Clark said. "Ibero paid for the fees to participate because Ibero is so committed to the neighborhood."

Kimberly Slaughter, 13, of Rochester said her aunt, a volunteer for Ibero-American Action League, suggested SHINE to her niece.

"She said it would be a good opportunity to meet new people and be in a club outside of school," said Kimberly, who attends Rochester Career and Mentoring Charter School. "It’s pretty cool."