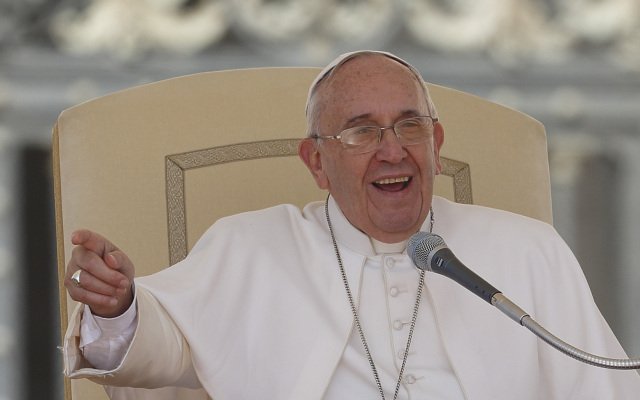 By Cindy Wooden
Catholic News Service
VATICAN CITY (CNS) — Someone who has never ever spoken ill of another could be declared a saint right away, Pope Francis said.
The Catholic Church’s sainthood process is long, complicated and usually requires the recognition of a miracle attributed to the candidate’s intercession,
Pope Francis said Sept. 11 at his early morning Mass. "But if you find a person who never, never, never spoke ill of another, you could canonize him or her immediately."
The pope’s homily focused on Jesus saying, "Why do you notice the splinter in your brother’s eye, but do not perceive the wooden beam in your own?"
In other passages of the Bible, he said, Jesus tells his disciples, "judge not and you will not be judged; do not condemn and you will not be condemned."
The pope told the small congregation in the chapel of his residence that he could imagine them saying, "Father, that’s beautiful, but how do you do it, where do you start?"
The first step, he said, is to learn how to "accuse yourself," to look honestly at your own faults, ask the Lord’s forgiveness and praise him for his mercy.
"The Lord teaches us this with this image of the splinter in the eye of your brother and the beam in your own eye," the pope said. "The first step is to accuse yourself" and not presume to be "the judge" pointing out the faults of others.
In the day’s Gospel reading from St. Luke, Jesus describes as "hypocrites" those who notice only the faults of others.
"The man and woman who don’t learn to acknowledge their own failings become hypocrites. Everyone, eh? Everyone starting from the pope on down," he said.
Recognizing one’s own faults and weaknesses, the pope said, is the first task in "this beautiful work of reconciliation, peace, tenderness, goodness, forgiveness, magnanimity and mercy that Jesus Christ brought."
Everyone, he said, needs to ask God for the grace and the strength to not speak ill of others, to stop when tempted to point out another’s faults.
Copyright © 2023 Catholic News Service, Inc. All rights reserved. Linking is encouraged, but republishing or redistributing, including by framing or similar means, without the publisher's prior written permission is prohibited.