Should New Yorkers be concerned about the Zika virus? - Catholic Courier 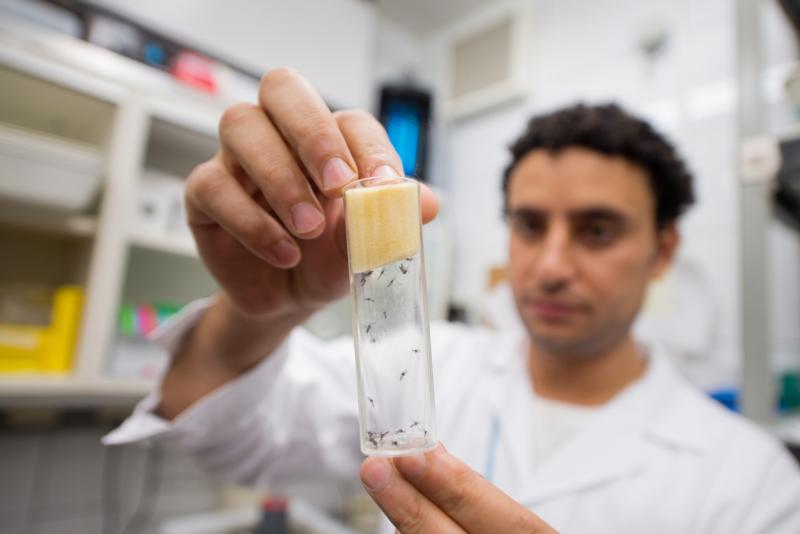 A scientist in Austria shows a jar with Zika-transmitting mosquitoes at the International Atomic Energy Agency Insect Pest Control Laboratory in Seibersdorf.

Amid news of Zika-carrying mosquitos moving into Florida and more people in the United States testing positive for the virus, local and state health officials are putting precautionary plans in place to keep residents safe.

The Zika virus is spread primarily by the bite of an infected Aedes species of mosquito, according to the Centers for Disease Control and Prevention. According to the CDC, an infected person can transmit the virus to others through sexual contact and blood transfusions.

The virus can cause such minor symptoms as mild fever, skin rash, muscle and joint pain and headaches or, in some cases, no symptoms at all.

Yet for pregnant women, who can transmit the virus to their unborn children, the virus is far more than an inconvenience.

According to the CDC, Zika virus infection during pregnancy is a cause of microcephaly and other severe fetal brain defects, and has been linked to such other problems in infants as eye defects, hearing loss and impaired growth. Babies born with microcephaly often have smaller brains that may not have developed correctly.

“In no way, however, would it justify a change in the Catholic Church’s consistent teachings on the sacredness and inviolability of human life and the dignity and beauty of the means of transmitting life through marital relations,” the statement said. “Direct abortion and contraceptive acts are intrinsically immoral and contrary to these great goods, and no circumstances can justify either.”

Suzanne Stack, life-issues coordinator for the Diocese of Rochester, agreed that Zika is a concern and said the diocese is monitoring the situation. She noted that a recent article on LifeNews.com (http://bit.ly/2bYHrJz), a pro-life news source, recently reported a statistic from the president of the American Association of Pro-life Obstetricians and Gynecologists, stating that 98 percent of pregnant women infected with the Zika virus will give birth to normal babies.

“You don’t know what is going to happen and you can’t jump to any conclusions,” Stack said, echoing the Catholic Church’s stance on the sanctity of human life.

Dr. Michael D. Mendoza, interim Monroe County commissioner of public health, said a few cases of Zika have been reported in the county, but that they all involved people who had traveled to areas where virus-carrying mosquitos were present. Since mosquitoes breed in pools of standing water, Mendoza noted that the region’s unusually dry winter and summer are believed to have helped combat the spread of Zika-carrying mosquitos to the area

Although no mosquito pools in New York have tested positive for the virus, a state health report (http://on.ny.gov/2c51Z2t) noted that more than 700 cases of Zika infection have been reported in 2016, mostly in New York City. The health department said of the cases involved people who acquired the virus while traveling to Zika-affected areas. The CDC has recommended that pregnant women refrain from traveling to areas affected by the Zika virus.

Even though Aedes mosquitos carrying the Zika virus have not been found in New York, the state is nonetheless enacting precautions.

In March, Gov. Andrew Cuomo announced a six-step action plan to combat potential transmission of the virus. According to the state website (http://on.ny.gov/2cfbu1o), the plan includes providing residents with larvicide tablets to control mosquitos; providing pregnant women with kits that included such items as educational materials, insect repellent and a starter kit of mosquito dunks to treat standing water; launching an awareness campaign to keep the public informed; and assembling a rapid response team in the event that an infection via mosquito occurred in New York. Residents can receive larvicide tablets and a starter kit of mosquito dunks by contacting the state’s Zika information line.

“The state is taking aggressive action to reduce the risk of Zika transmission in New York,” Gov. Cuomo said in a March 17 press release. “We have put in place a first-in-the-nation action plan that will work to eliminate Zika at its source, reduce potential transmissions and safeguard expectant mothers against this dangerous disease.”

Though there currently is little risk to area residents, Mendoza said the local medical community is prepared and adhering to the recommendations from the New York State Department of Health and the CDC.

“We are staying on top of it and making sure people are informed with the latest information,” he said.

EDITOR’S NOTE: The New York State Department of Health has established a toll-free information line, open Monday through Friday from 9 a.m. to 6 p.m. to answer questions on Zika. The number is 1-888-364-4723.