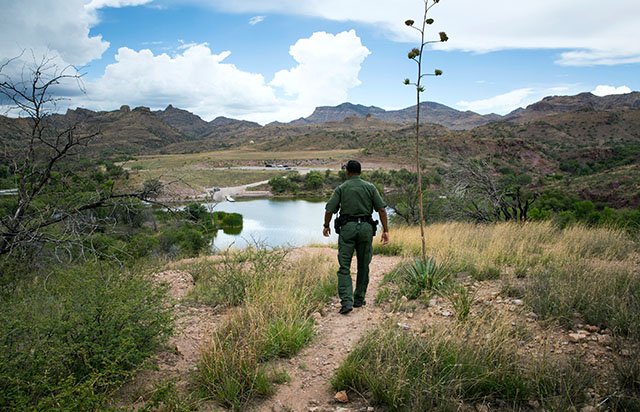 Border Patrol Agent Bryan Flowers walks above Pena Blanca Lake, a small recreation area about 17 miles northwest of Nogales, Ariz., in July. A booming number of unaccompanied children from El Salvador, Honduras and Guatemala have been crossing the U.S. border with Mexico.

SILVER SPRING, Md. (CNS) — Henry and Karen Castellanos Escalante were in danger in their own neighborhood.

Gang members "were following me everywhere," said Henry. "I couldn’t go out of our home because they were always trying to make me be a part of their gangs."

In an interview with Catholic News Service and the PBS program "Religion and Ethics Newsweekly," the now-18-year-old said he was forced to drop out of school after the fifth grade. There was no way to get to school from their San Salvador home without encountering violent gangs, who were forcefully recruiting boys his age, Henry said. They even followed him into the school.

His sister Karen, now 16, made it to the sixth grade before she also dropped out.

Threats included frequent neighborhood shootings, such as a murder just outside their house. For Karen, the risk of being attacked by gang members became vivid when a friend dropped out of sight after being raped by the kinds of boys who also followed her.

In March 2012, the siblings left El Salvador together — at ages 14 and 16 — taking an often-terrifying five-month journey across Central America and Mexico before being apprehended by the U.S. Border Patrol soon after reaching Texas.

Henry said his parents, in consultation with U.S. relatives, decided "it would be a better future for us" if they could get to the United States. With no hope of obtaining a visa to do that legally, their father found a smuggler, or "coyote," to take them. The siblings don’t know how much was paid, nor were they asked if they wanted to go.

"They just said we had to go," said Henry.

The Castellanos arrived near the beginning of an unprecedented surge in minors traveling without their parents who have been apprehended in the United States. The number of such teens and children caught without immigration documents had topped 66,000 by the end of August, nearly double the 35,000 who were detained in all of the 2013 fiscal year.

The boom has come primarily among citizens of El Salvador, Honduras and Guatemala, who, under federal law, may not be summarily deported. Consequently, the federal systems for processing, caring for and prosecuting the minors for deportation have been overwhelmed. This summer, agencies scrambled to make room for the juveniles as President Barack Obama unsuccessfully sought additional funding for immigration courts and the various law enforcement entities involved in what he described as a crisis.

The saga of the Castellanos siblings is typical of what many youths experience, according to immigration attorneys.

Henry and Karen today have a stable, safe life, living with an uncle outside of Washington and attending high school, with plans for college. They receive legal assistance through Catholic Charities of the Archdiocese of Washington. Their attorney helped arrange the interview.

They seem to be on track for permission to stay permanently with their uncle, after a Maryland judge found that they meet the first hurdle toward special immigrant juvenile status, granted to certain minors who have been abandoned by their parents.

But two years after Henry and Karen left home, the teens are still a bit traumatized when discussing their journey. Though they’re glad they made the trip because their lives are much better here, they say they wouldn’t recommend it.

"It was a really bad experience," said Henry. "I wouldn’t want anyone to do that."

The bad parts included four months of traveling with smugglers in cramped vehicles and, often, on foot in the dark, and hiding during the day. Once across the U.S. border, they were soon separated. For a month, neither knew if the other was alive. For three months, there was no communication with their parents.

Traveling for weeks on end with several men, women and a child, the two said they never felt safe. "Almost all the time we were packed in some uncomfortable place," said Henry.

Soon after they got to Texas, Henry said, "We were in a truck … when the truck crashed and everybody started running. I didn’t see anybody else, just my sister. I grabbed her and started running as fast as we could."

"We decided to hide behind one tree, waiting, waiting," he continued. Nobody came for them, but soon a helicopter passed. "The next thing I remember was seeing someone with a really big gun talking to me in English. I didn’t know what to say because I didn’t speak English."

A Spanish-speaking officer came along and said to get out of the bushes. But because Henry had been blocking his sister with his body, the officer didn’t see her. "She ran," Henry said. "So they got me first."

Karen picked it up from there. "I hid on the ground," she said. "I hid for maybe one hour, then the (Border Patrol) left."

Switching to Spanish, Karen finished the story in a tumble of words. She found three men who had been with them, and before long, the smuggler appeared.

"We went to a house where there were a whole lot of people," she said — men, women and children. Once or twice, the smugglers returned with food. "I slept one night there and then the next night we started to walk, three nights through the desert."

"In the desert, we ran into wolves, a snake," she said, shuddering at the memory. During daylight, they tried to rest, but she never really slept.

"The last night we walked, we started at 6 in the evening and walked until 6 in the morning," said Karen.

After hiding from the Border Patrol once more that last morning, 14-year-old Karen again found herself alone.

"I had no food or water, I was hungry," she said. "I started walking and looking for people from our group. I called out and nobody answered."

Eventually, she ran into a boy who had been with them and they began to walk along a highway.

"Finally a police car came along," Karen said. After they couldn’t answer the officer’s questions about where they were going, they were taken into custody. Eventually, Karen was taken to the detention center where her brother was being held, though it was weeks before either knew the other was there.

The day that Henry spotted his sister across the room at the youth detention center was a happy one. Neither had spoken to their parents, they said, and the authorities didn’t know either of them had been traveling with a sibling.

Fear had kept Henry from asking anyone about her.

In the two years since they were put on a plane to Maryland to stay with their uncle, the Castellanos have settled into a less dramatic life: school, friends, church. They speak with their parents and two younger brothers irregularly.

Their parents also came to regret their decision to send the two away, they said. Though they said they miss their family, neither one is interested in returning to El Salvador, except maybe to get their younger brothers out of the country.

"I don’t feel afraid here, that someone is trying to kill me," Henry said. "Now I can go to school and I’m learning. I think I have a better future." He hopes to have his own business one day. Karen thinks about becoming a doctor, or maybe a teacher.

Henry admits to sometimes waking up in a cold sweat, having dreamed about sleeping outside in the cold "trying to keep myself together."

But as hard as everything they experienced was, Henry explained, it is difficult for people in the U.S. to understand what drove them from El Salvador.

"They don’t understand the risks people take every morning," he said, or what it’s like to be taunted by gangs that threaten to kill them or their families. "They risk a lot just to go outside."