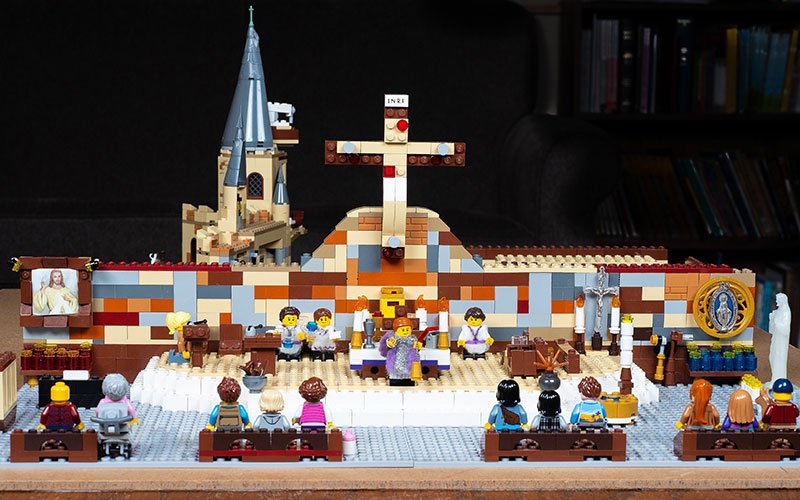 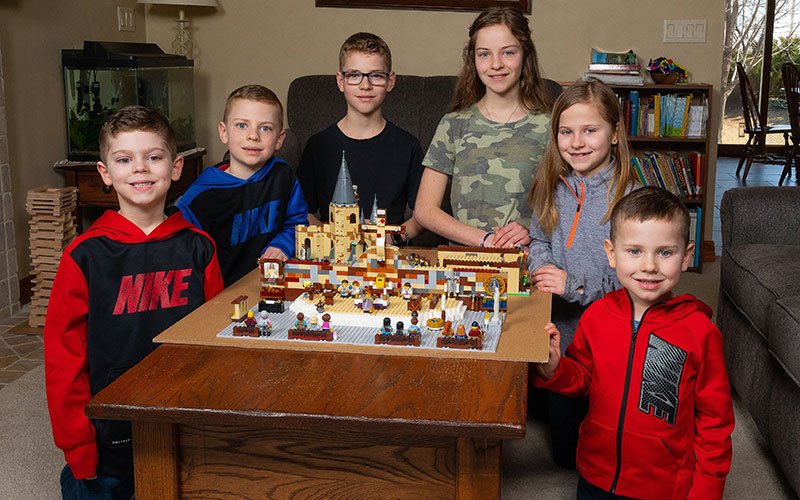 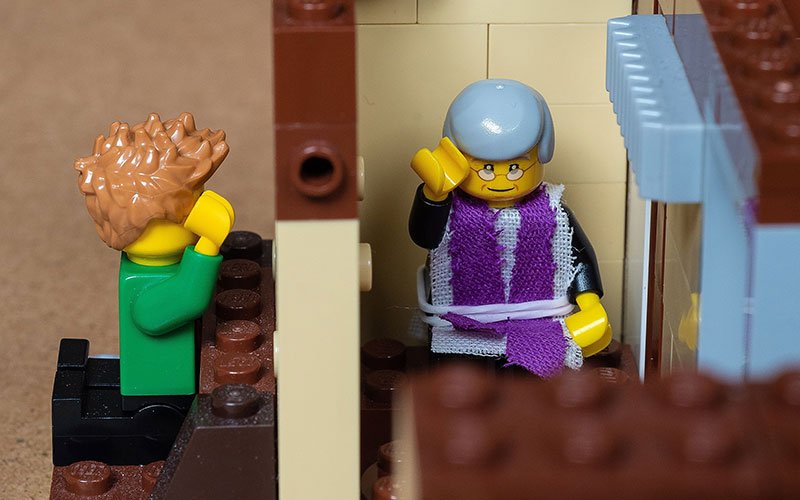 Characters made from Legos by the Ostermeier children of Appleton, Wis., depict Father Jim Jugenheimer, pastor of St. Pius X Parish, offering the sacrament of penance to a parishioner. (CNS photo/Sam Lucero, The Compass) 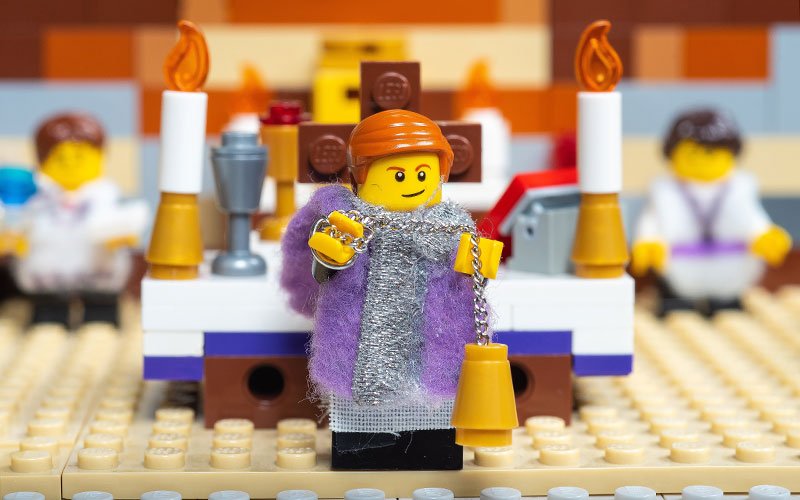 APPLETON, Wis. (CNS) — A little creativity with Lego pieces by John and Holly Ostermeier’s six children has yielded a re-creation of the family’s parish church, St. Pius X in Appleton, right down to the altar, candle bank, piano and priest celebrating Mass.

There’s even a thurible for incense and a candle snuffer.

The children, all of whom have been part of the “Catechesis of the Good Shepherd” faith formation program at their parish, were inspired to build the replica of the church sacristy while learning about the Mass and the various terms associated with it.

Their three oldest children — Isabel, 13, Ben, 12, and Amelia, 10 — are altar servers at the parish. Their younger children — twins Simon and Linus, 8, and Jonah, 5 — plan to be altar servers when they’re old enough.

How it all began

Holly said the project began two years ago when Linus built a very small church with an altar, chalice, paten, some bread and a tabernacle. With some encouragement, the siblings transformed the generic church into a miniature of the St. Pius X Church’s nave.

“The ‘Catechesis of the Good Shepherd’ really gave them a lot of the background and the inspiration to do this because they know what everything is on the altar and in the sacristy,” John explained. “And altar serving,” Holly added.

All six children are home-schooled.

“This is our first year,” Holly said, explaining the decision on home schooling was made following a year in which the children attended public school classes online because of the COVID-19 pandemic. The home schooling has worked out for the family.

Hanging behind the altar in the St. Pius miniature is its most eye-catching feature: a large crucifix. Three aisles are lined by pews filled with parishioners, including a family with a baby, an elderly woman in a wheelchair, a man with a crutch and a person attending Mass with their service dog.

Steps lead to the sanctuary. A Lego version of Father Patrick Costello, St. Pius X’s parochial vicar, stands at the altar celebrating Mass. The Lego blocks in the wall behind him match the colors of the stones in the church.

“We added a glow-in-the-dark statue of the Sacred Heart of Jesus with candles in front of it. There’s a baptismal font. Next to that is the Easter candle. Because it’s Lent, we have Lenten decorations on the steps to the altar — two pots with sticks in them,” Isabel explained to The Compass, newspaper of the Diocese of Green Bay, Wisconsin.

“On the altar is a crucifix, two candles, the Roman Missal, wine and the ciborium where the consecrated hosts are kept,” she added. “Father is holding a consecrated host in his right hand. The back altar has two candles, the tabernacle where the ciborium is stored and the sanctuary lamp next to it that’s lit all the time. On the table in the back are the cruets. One has wine and the other has water. Then there’s the lavabo dish for the washing of the hands.”

Several months ago, the children built a convent and high school modeled after the Discalced Carmelites’ Monastery of the Holy Name of Jesus in Denmark, Wisconsin, about 15 miles south of Green Bay.

“Because we’re altar servers, we get to see a close-up view of all this. Ours has all the same stuff that is in the sacristy at St. Pius,” Isabel said. “Behind the sacristy is a confessional with the person kneeling. Father Jim (Jugenheimer, pastor of St. Pius Parish) is in the confessional.”

Father Kyle Sladek, former parochial vicar of St. Pius X, is depicted vesting in the sacristy by a mirror. The priest now serves two other Wisconsin parishes as administrator — St. Mark in Redgranite and Sacred Heart of Jesus in Poy Sippi.

The narthex completes the church property.

“There’s a statue of St. Pius X. Our church has chairs and tables in that area, a bulletin board, a table next to the sacristy that has the ‘Two Hearts Devotion’ (Sacred Heart of Jesus and Immaculate Heart of Mary), prayer intention books and copies of The Compass newspaper,” Isabel said. “The headline on this one is, ‘There’s a Lego church campus.'”

The project — which is both for show and for play — is not only a testament to the faith of the Ostermeier children, but to their creativity as well. “To take all these little Lego pieces and find these creative uses for them, I can’t comprehend that,” John said.

“It’s just evolving,” Holly said. “Every week, they tell us to come downstairs because they think of something new.”

Lauer writes for The Compass, newspaper of the Diocese of Green Bay.