Sicily: A front line in the church's work for migrants - Catholic Courier 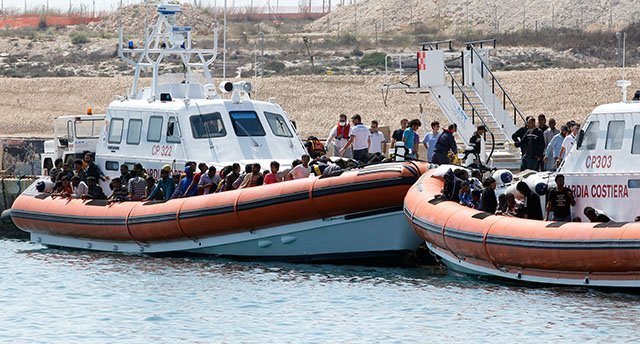 Immigrants wait on Italian coast guard boats after arriving at the port in Lampedusa, Italy, July 9, 2013. The day before in Lampedusa, Pope Francis lamented the sufferings of people who flee their homeland and mourned those who have died doing so. The island has been a landing point for scores of immigrants from Africa attempting to make their way to Europe.

ROME (CNS) — At least 124,000 migrants entered Italy in the first eight months of this year, more than twice the 60,000 who arrived in all of 2013. The vast majority landed first in Sicily where, through Caritas and other Catholic organizations, the church is on the front line in receiving them.

"I paid a trafficker $1,000 to spend three days on a little boat without food or water before landing in (the Sicilian port of) Caltanisseta," a 30-year-old Nigerian man who identified himself as Celestine told Catholic News Service. "There Catholic volunteers helped me arrange for my legal stay in Italy."

Today, Celestine is a street peddler selling trinkets in Rome, "but I’m still better off than in Lagos," he said.

Seeing to the new arrivals’ immediate needs in Sicily’s multiple port cities is now a joint effort between church and civil society.

In January, the Palermo branch of Caritas, the Catholic charitable agency, signed a convention with city authorities to open four centers for migrants, known as extraordinary welcome centers, which currently house 160 people.

According to their agreement, the city gives Caritas $39 per day to provide each migrant with housing, food, hygiene, health and legal services, and daily pocket money worth about $3.

Volunteers include medical doctors and lawyers who help the new arrivals understand their legal rights. When groups of migrants suddenly arrive, Caritas volunteers greet their boats with food, clothes and medical help. In an emergency, Palermo churches remove pews and install cots, provided by the city, for stays of as long as a week.

"The first screening is superficial, but we send them to our clinic to be checked," Dr. Affronti told CNS. "We’re proud this service exists."

In Catania, the Caritas Help Center stayed open the whole summer to provide food, shelter and clothing to some 400 migrants and other homeless people.

"The poor don’t go away on vacation," Father Piero Galvano, director of Caritas in Catania, told BlogSicilia, an online publication, in July. "Migrants deserve being treated with dignity and respect. Tending to them is a sign of civilization."

The challenge will not go away anytime soon, church workers said.

"These political, economic and religious migrations of individuals and of whole communities are no longer a marginal phenomenon requiring emergency responses. They are structural and involve whole countries," Father Aldo Skoda told a group of 50 priests, volunteers and theology students from 20 Italian dioceses studying how to work with migrants last June in Rome.

"They profoundly affect the social, cultural, religious and economic life of the countries left behind as well as the countries of destination," Father Skoda said, according to a publication of the Italian bishops’ Migrantes foundation.

One-hundred-twenty miles off Sicily, about 110 miles from Libya and 70 miles from Tunisia, the island of Lampedusa is often the gateway to Europe for those who survive the sea crossing — as many have not.

In July 2013, Pope Francis dropped a wreath into the waters off the Sicilian island and said: "These our brothers and sisters seek to leave difficult situations in order to find a little serenity and peace — a better place for themselves and for their families." Many found death instead, the pope said.

Italian intelligence sources in Libya, the main transit point for those reaching Italy by sea, say one million people are waiting to leave North Africa for Europe, the Rome daily La Repubblica reported in September.

Once primarily lone job seekers, today’s migrants are increasingly families seeking refuge from areas wracked by war or religious persecution. On a single day in late August, nearly 1,000 people from Syria, Gaza and Egypt landed at the town of Pozzallo, near Ragusa, Sicily. Of these, 182 were children, one clutching a pet cat.