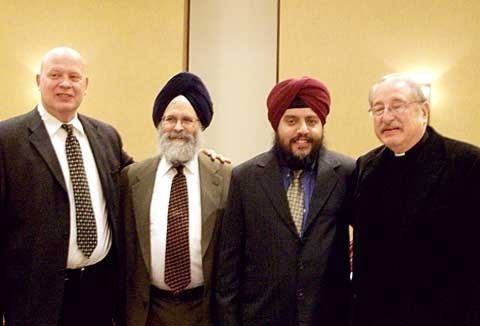 Deacon John Brasley (from left), Ralph Singh, Chetan Singh Rakieten and Father Norman Tanck pose for a photo during a Nov. 18 meeting of members of the Sikh and Catholic communities at the diocesan Pastoral Center in Gates.

GATES — Chetan Singh Rakieten, a photojournalist with Rochester’s WROC-TV (Channel 8), said he has endured stares and outright discrimination in the past because he wears a turban.

Although Rakieten is bound by the Sikh religion to keep his hair uncut and to wear a turban as a head covering, a soccer referee once told him he could not play with it on, and the photojournalist was once told by a judge that he could not wear what the judge called “a hat” in a courtroom. While working at a previous television job in Sarasota, Fla., Rakieten was even called “bin Laden” while on assignment — a reference to Muslim extremist Osama bin Laden.

After each of these incidents, Rakieten has had to educate people on the religious significance of his turban; to Sikhs, it is a symbol of respect and religious tolerance.

Yet when the television cameraman was asked by some parishioners to leave the sanctuary of an Irondequoit Catholic church in May — even though he said a staff member had given his station permission to film a Mass — Rakieten said he was stunned by the negative reaction the turban generated. As he left the sanctuary, he and the reporter accompanying him were confronted by several people who made negative comments about Rakieten’s turban.

“I was really upset,” Rakieten said. “Coming from a religious family, I’ve been to a mosque, a synagogue, and I’ve been to a Catholic church and a Christian church. I’ve never felt that type of hatred before.”

While being careful not to make excuses for the behavior Rakieten reported, Father Norman Tanck explained that the cameraman walked into a volatile situation that day, as parishioners of St. Thomas the Apostle Church in Irondequoit learned that regular Masses were going to be discontinued at their church. Some were upset by the presence of a news camera at Mass as they received the news. He also noted that the comments of a few parishioners to Rakieten do not represent the beliefs of St. Thomas the Apostle Church or of Catholics in general.

Despite the negative nature of that encounter, Rakieten and Father Tanck say a “teachable moment” has arisen out of the misunderstanding. The diocese and local Sikhs have established an interfaith dialogue, and the first event was a faith-sharing discussion Nov. 18 at the Bishop Hickey Conference Center at the diocesan Pastoral Center. The incident also led Rakieten and his television station to develop an educational series on world religions.

“The one thing I’ve learned from the situation is it’s time to forgive and move on,” Rakieten said.

“I hope a crisis like this that brings our community together continues to deepen our relationship,” Father Tanck added.

Much of the discussion centered on the history of Sikhism, which was established by Guru Nanak Dev ji in the late 15th century as a religion that bridged the divisions between Muslim and Hindu practitioners in the Punjab, which was then part of India and is now located in Pakistan.

The word “Sikh” literally means disciple, and a Sikh’s path to salvation involves meditation, vocational work and selfless service to those in need. Sikh founders rejected the caste system of the day and called for equal rights for men and women. Guru Nanak also traveled far and wide to promote unity among people and to teach people about service.

Guru Nanak was succeeded by several other gurus, including the ninth guru, who was called by his 8-year-old son to stand up to an oppressive emperor who was attempting to convert Hindus to Islam. That guru laid down his life for the religious freedom of others, and his son, Gobind Singh, became the tenth guru.

Gobind Singh created the order of the Khalsa — the order of the pure — which is notable for its symbols of purity, fidelity and chastity. Baptized Sikhs have uncut hair, a turban, a comb as a symbol of cleanliness, a metal bracelet as a symbol of being bound to truth and freedom, underclothes representing chastity and fidelity, and a small, ceremonial dagger to symbolize the defense of those in need.

“Whenever you see a Sikh, know that this turban stands for truth, for justice, for the universal rights of everyone to pray privately or in public according to their own beliefs without fear of persecution,” said Ralph Singh, Rakieten’s father, an American convert to Sikhism who has been involved in interfaith dialogue for more than 40 years.

There are an estimated 26 million followers of Sikhism worldwide, and several hundred are estimated to live in the Rochester area. In the years following the Sept. 11, 2001, attacks, some people who intend to attack Muslims for their religious beliefs also attack Sikhs, believing they are Muslim.

That was the case for Ralph Singh and other members of the Sikh community in Syracuse. Following the Sept. 11, 2001, attacks, four teens burned down the Syracuse Sikh community’s house of worship, believing those who worshipped there were Muslim.

Following this incident, the Sikh community publicly forgave the teens and established dialogues with local religious leaders and educators.

Forgiveness also has been given in the Irondequoit incident, as diocesan officials — including Bishop Matthew H. Clark — spoke with Rakieten immediately after the incident to apologize. Officials also met with Rakieten and other members of the Sikh community to discuss ways to improve relationships between Sikhs and Catholics.

The dialogue was one of the ideas generated from those meetings.

“This was one of the ideas to make things better — to bring communities together for better understanding,” Rakieten said.

“As far as I know, this is the first time I know of that Catholics and Sikhs have deliberately met together,” Deacon John Brasley, coordinator of ecumenical and interreligious affairs for the diocesan office of Parish Support Ministries, said during the Nov. 18 gathering. “You are part of history tonight.”

“I think it’s clear we need to understand the beliefs of other religions in order to live our call to be authentic followers of Jesus Christ,” Deacon Brasley said of Catholics.

“It’s a blessing in disguises that we are all here today, sitting together like family — like one community,” said Parminder Singh Soch, a member of the local Sikh community.

Tags: Interfaith Relations
Copyright © 2023 Rochester Catholic Press Association, Inc. All rights reserved. Linking is encouraged, but republishing or redistributing, including by framing or similar means, without the publisher's prior written permission is prohibited.