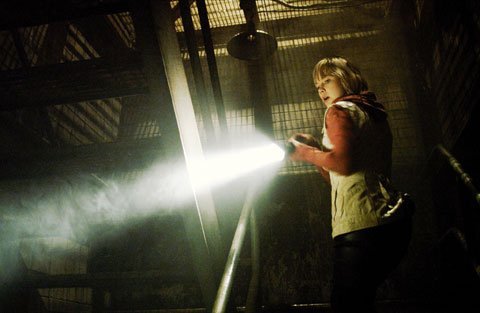 With its messy mythos, uninteresting characters and cliched imagery — an insane asylum, check, a ruined amusement park, check — writer-director Michael J. Bassett’s follow-up to 2006’s "Silent Hill" is as stiff as its innumerable corpses. While not as blood-soaked as the worst in the genre, moreover, his movie also features an excess of gory wounds and severed limbs.

Based, like its predecessor, on a series of video games, the film follows the tormented adventures of a teen girl whose name may or may not be Heather Mason (Adelaide Clemens). Together with her widowed father Christopher (Sean Bean), Heather is a fugitive from the pestering attentions of a pack of demons who reside, apparently, in the ghost town of the title.

When Dad disappears, abducted by same, Heather gains the aid of admiring school chum Vincent (Kit Harington) as she journeys to the haunted locale. There she hopes to rescue papa and solve the mystery of her cursed identity.

The convoluted backstory contains some passing quasi-religious references to "the god" as well as to Heather’s potential role as a "savior." And outside the aforementioned loony bin there’s a figure who, for no very apparent reason, has been crucified. But viewers may be too busy wondering why one of the residents of Silent Hill — a sword-wielding giant — has his head jammed inside a wedge of metal shaped like a slice of Brie to notice.

At one point in her wanderings, Heather encounters a nude female whom the demons are about to transform into a mannequin — but not, of course, before the audience gets a glimpse of her still-human torso. That bit of peek-a-boo aside, though, the sexual content is minimal. Heather and Vincent share a Bates Motel-like room together, but they behave themselves perfectly.

Not so the baddies chasing Heather; they maim the extras and burn them alive, and heads literally roll.

So too, no doubt, on the other side of the screen, will eyes.

The film contains much gruesome violence, including torture and dismemberment, brief upper female nudity, at least one use of profanity and occasional rough and crude language. The Catholic News Service classification is O — morally offensive. The Motion Picture Association of America rating is R — restricted. Under 17 requires accompanying parent or adult guardian.