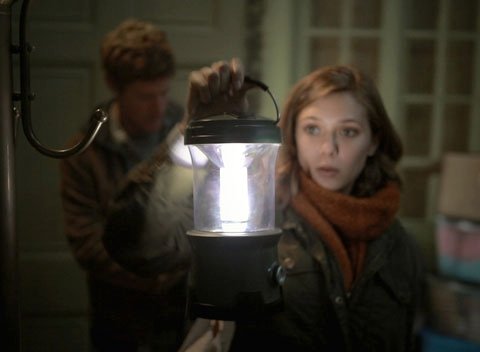 There’s more style than substance here, and astute viewers are going to figure it all out at least 30 minutes before the ending.

Considering that the film’s conceit is that it appears to be shot in a single 88-minute take, what we’re left with is less than an hour’s worth of modest thrills. They come, predominantly, from the pleasingly claustrophobic effect of a handheld camera prowling around a conveniently dark and boarded-up lake house.

The script by Laura Lau, who also shares directing credit with Christopher Kentis, adds a gritty subtext to the proceedings. While not dealt with explicitly, this element nonetheless renders the picture appropriate fare only for mature adults.

Elizabeth Olsen plays young Sarah, who is helping her father John (Adam Trese) and creepy Uncle Peter (Eric Sheffer Stevens) clean out and pack up their family’s summer place in preparation for selling it.

As with all haunted houses, this one holds memories. But the question is — whose?

Uncle Peter’s early leer at Sarah is the first clue, one that’s about as subtle as the sledgehammer that later comes into play. And then there are the old Polaroid photos that keep being found.

Every door in the place creaks, and there’s a mysterious visit from Sophia (Julia Taylor Ross), who claims to be Sarah’s old childhood pal. Figure out who Sophia really is, of course, and you’ll be holding the key to this cinematic fixer-upper.