Simeon realizes that Jesus is the Messiah - Catholic Courier 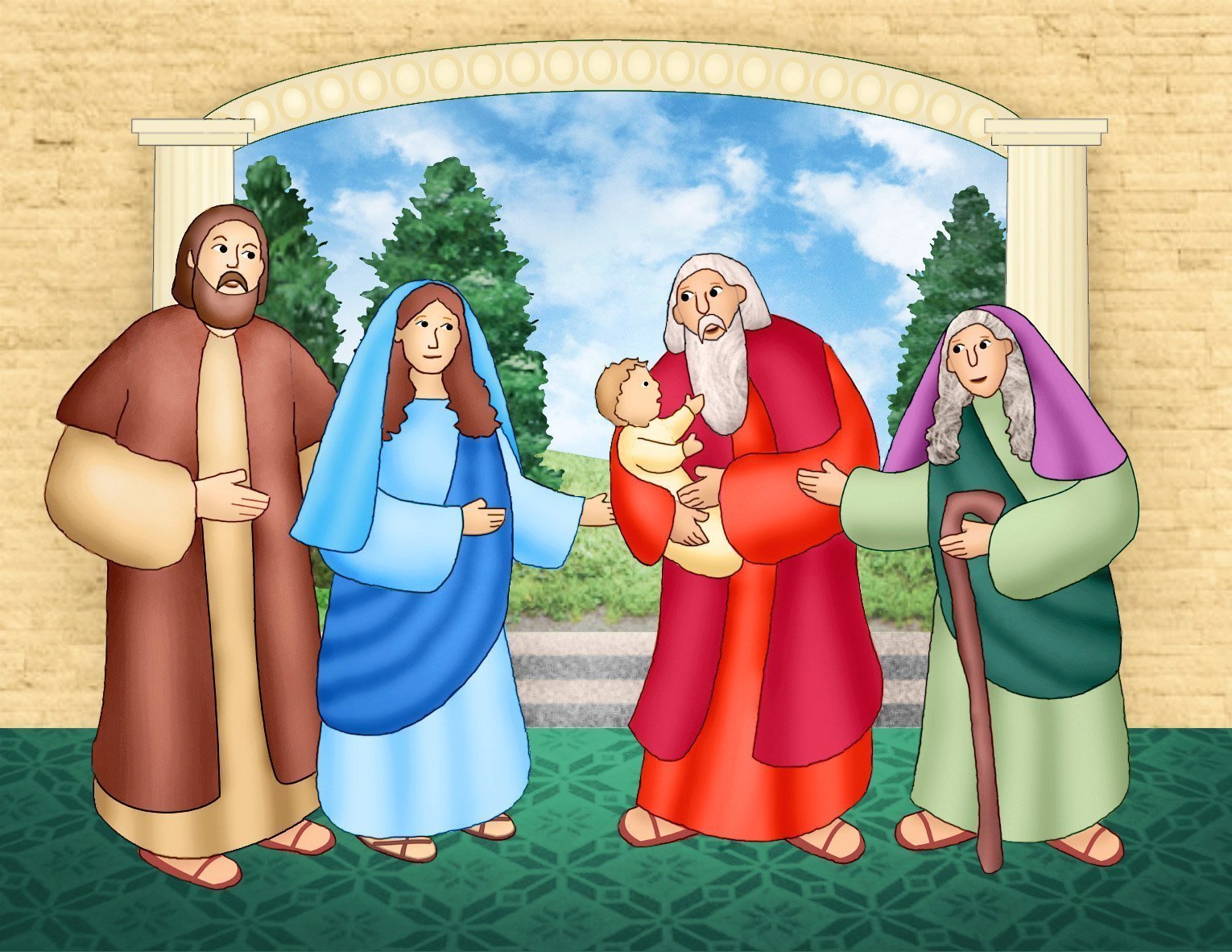 This is the artwork for Kids' Chronicle for Dec. 27, 2020. (Illustration by Linda Rivers

Simeon realizes that Jesus is the Messiah

Simeon realizes that Jesus is the Messiah

Joseph and Mary had traveled to Bethlehem, the city of Joseph’s ancestors, to be counted in a census.

Mary was pregnant, and while she and Joseph were in the city, she had her baby.

When the baby was born, the angel of the Lord appeared to shepherds who were watching their flocks during the night. The angel told them a savior had been born in Bethlehem.

“And this will be a sign for you: You will find an infant wrapped in swaddling clothes and lying in a manger,” the angel said.

The shepherds went to Bethlehem. After they had found Joseph, Mary and the baby, they told everyone what the angel had said.

When the baby was eight days old, he was given the name Jesus. When Jesus was about one month old, his parents took him to Jerusalem to be presented at the Temple.

At that time, a man named Simeon lived in Jerusalem. Simeon was righteous and devout, and the Holy Spirit was with him.

The Holy Spirit had revealed to him that he would not die until he saw the Messiah whom God had promised his people.

Simeon walked up to Mary and Joseph. He took Jesus into his arms and blessed God.

“Now, Master, you may let your servant go in peace, according to your word, for my eyes have seen your salvation, which you prepared in sight of all the peoples, a light for revelation to the gentiles, and glory for your people Israel,” he said.

Joseph and Mary looked at each other. They were surprised by what they had heard.

Just then, the prophetess Anna, who worshipped in the Temple all the time, came over to see the infant. She thanked God and told everyone in Jerusalem who was waiting for the Messiah all about the baby Jesus.

Afterward, Joseph, Mary and Jesus returned to their home in Nazareth. As Jesus grew and became strong, he was filled with wisdom, and God’s favor was upon him.

1. What man recognized Jesus as the Messiah?

2. What woman was always worshipping in the Temple?

TRIVIA: What were Joseph and Mary required to sacrifice at the Temple? (Hint: Luke 2:24)

Answer: A pair of turtledoves or two young pigeons.

When Jesus was a young boy, he once again visited the Temple in Jerusalem.

We read in Luke 2:41 that Joseph, Mary and Jesus went to Jerusalem each year to celebrate the Passover feast.

One Passover, they went to Jerusalem as usual. Afterward, Joseph and Mary left Jerusalem with a caravan of family and friends and headed back to Nazareth.

What they didn’t realize is that Jesus, who was 12, was not with them.

They journeyed for a day and then looked for Jesus among their relatives and friends. When they couldn’t find Jesus, they returned to Jerusalem to look for him.

After three days of searching, Joseph and Mary found Jesus in the Temple. He was sitting in the midst of the teachers, listening and asking questions. And everyone was amazed at his understanding and his answers.

Joseph and Mary were astonished when they saw Jesus.

“Son, why have you done this to us? Your father and I have been looking for you with great anxiety,” Mary said.

“Why were you looking for me?” Jesus answered. “Did you not know that I must be in my Father’s house?”

After that, Jesus returned to Nazareth with his parents.

St. Andre Bessette was born in Canada in 1845. He left his home country to work in the U.S. for three years, returning to Canada in 1870.

Upon his return home, he joined the Congregation of Holy Cross and took his final vows in 1874.

He lived with his community near Montreal and served for many years in such positions as doorman, janitor, barber and gardener. He also created a popular healing ministry.

He permanently moved to Montreal in 1904 to help build the Oratory of the Holy Cross. He died in 1937, and we remember him on Jan. 6.

Using the hints provided, fill in the blanks in the sentences about temples.