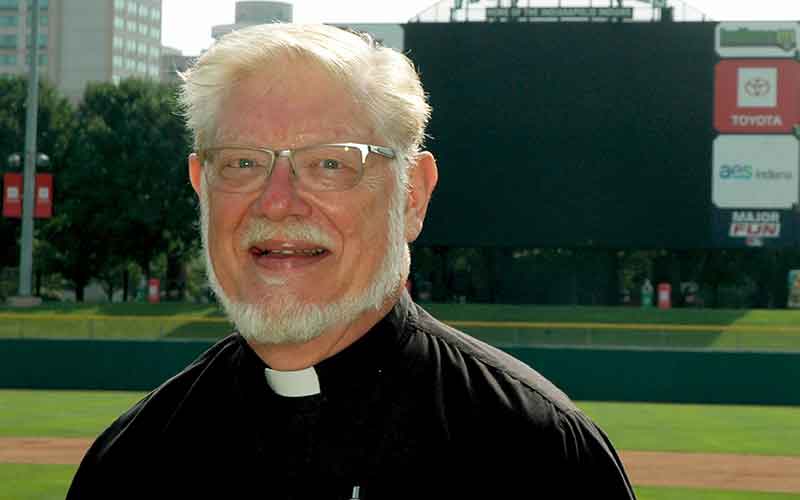 Father Rick Ginther is seen in Victory Field in Indianapolis July 6, 2022. Before the Indianapolis Indians game Aug. 4 at the ballpark, he planned to sing the national anthem a cappella -- a longtime dream of his. The Indians are the AAA affiliate for the Pittsburgh Pirates. (CNS photo by John Shaughnessy/The Criterion)

INDIANAPOLIS (CNS) — A year after driving a Mustang on a racetrack at more than 100 mph, Father Rick Ginther will cross off another dream from his bucket list when he strides onto Victory Field before the start of the Indianapolis Indians game Aug. 4.

As he stands near home plate and looks up into a crowd of thousands of baseball fans, the 71-year-old pastor of Our Lady of Lourdes Parish in Indianapolis will sing “The Star-Spangled Banner” a cappella.

“I was a little surprised and flattered to be chosen,” he told The Criterion, newspaper of the Indianapolis Archdiocese.

He described what he thinks he’ll be feeling in that moment when he sings the national anthem: “Oh, my gosh, this is really happening! OK, breathe, breathe. Remember support, support. Plant your feet where you want them. Hold the microphone and just relax and do it.”

“That’s what I’ll be thinking. I’ll get into performance mode and just totally focus on what I’m doing,” he said.

“When you’re a singer, you have your bucket list, and this is one of mine,” he added, and told how being able to live this dream came about using one of his other gifts: storytelling.

Last summer he went to Las Vegas with a parishioner and friend named Chris Swinefurth. The priest said he himself has “no interest in gambling” but he got to do “some things I’ve never done,” like driving a Shelby GT Mustang on a track. “Big muscle car. I got up to 115 (mph) on the track,” he said.

“During a conversation, Chris said, ‘This is so out of character for you, driving a sports car with a helmet on, on a track.’ I said, ‘Oh, yeah, there’s a part of me that’s always wanted to do these kinds of things.’ He said, ‘Well, what are some of the other things you’d like to do someday?'”

Father Ginther told his friend that he has always wanted to sing the national anthem before a game in front of a crowd. Earlier this year Swinefurth asked the priest if he’d like to sing the anthem at an Indians game. Father Ginther said he would like that and Swinefurth began to set his plan in motion.

“He took my singing voice off of one of our Masses that we livestream and record, made a demo tape, took it down there or sent it to them and they said yes,” the priest said with a smile. “So suddenly I’m singing the national anthem at Victory Field. I’m not a big baseball fan, but it’s one of the best parks in the country. It’s just fun to be there.

Visiting the Great Wall of China

Other items Father Ginther has crossed off his bucket list include traveling recently to Germany to witness the Passion Play in Oberammergau; visiting Rome for the first time in 2006; graduating from the University of Notre Dame in 2001 with a master’s degree in liturgical theology.

There’s also the memory of being on the Great Wall of China in 1989.

“Oh, my gosh, I’m standing on the Great Wall! This is really cool!” he recalled. “That was an amazing moment, to stand on the Great Wall and realize it’s a man-made artifact that can be seen from space, and also that it’s over 3,000 miles long.”

It was even more special because he had read about the Great Wall when he was in eighth grade at Catholic school in Indianapolis and wondered what it would be like to see it in person.

Lure of singing and performing began at young age

That eighth-grade year also was about music. He was among several thousand Catholic school children who took part in the Catholic Youth Organization’s Songfest in the Butler University fieldhouse in Indianapolis.

The lure of singing and performing also led him to the leading role of Harold Hill in “The Music Man” when he was a senior in Catholic school. He took vocal lessons and sang in choirs while he was in the seminary at the Athenaeum of Ohio in Cincinnati.

“I like to sing songs that move the soul and move the heart,” he said. “If it has a connection to classical music, I really like it, but I also like really upbeat music. I still sing some of the songs from the ’50s and ’60s in my head.”

The national anthem will be a constant in his head during his preparation for the Indians game. The team is the AAA affiliate for the Pittsburgh Pirates.

Before he steps onto the field, he will do something else that is a constant in his life. He will pray.