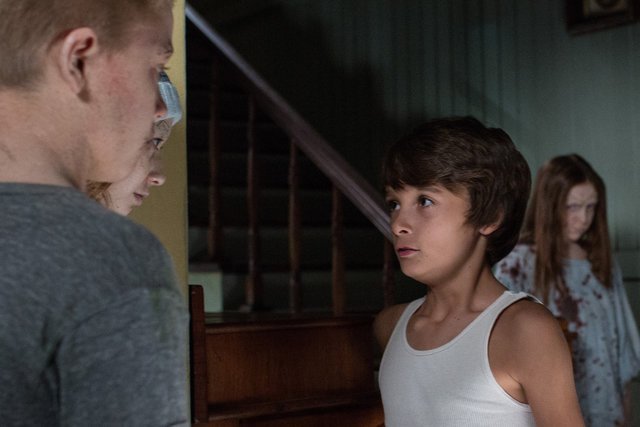 NEW YORK (CNS) — The desultory "Sinister 2" (Gramercy) presents as good an opportunity as any to reflect on a seldom noted, yet deeply irksome piece of contemporary horror film bric-a-brac: the inevitable cameo by a Catholic priest.

Vicious caricatures of the clergy and sacrilegious portrayals of religious practice have become as commonplace in chiller plots as scream-inducing jump cuts. So the opening visit of this flick’s hero, So & So — and, yes, that really is the name of the formerly minor character played by James Ransone — to a confessional booth suggests we’re off to an ill-starred start.

Although So & So proves an inept penitent, Father Rodriguez (John Beasley) somehow recognizes the ex-deputy as a demon-hunter; perhaps Father has seen the first movie? Rodriguez correctly suspects, moreover, that this spiritual warrior is facing a fresh set of troubles.

"Do you want my professional opinion?" the cleric rumbles. En garde, Catholic viewers!

"You don’t stop evil. You can only protect yourself from it."

Oh, a platitude. Not so bad.

Rodriguez, it seems, is only there to enunciate the theme in a movie that merely samples religious imagery intermittently. Happily for all concerned, having done so, he doesn’t reappear.

Bughuul likes to lure children into killing their families in elaborately gruesome ways. In the manner of a tiresome tourist of old — circa, say, 1965 — Bughuul also enjoys documenting these deaths with a superannuated home movie camera.

The disturbing twist this time results from the filmmakers’ flawed effort to give Bughuul a quasi-moral justification for his freewheeling slaughter. They do so by hinting that at least some of his victims may have been abusive parents.

Naturally, the house has a haunted basement, and the shuttered church on the property — the venue for one of Bughuul’s mass murders a few years earlier — is crawling with the ghosts of children.

These unsuitable playmates try to convince first the sensitive Dylan, and then Zach, to do Bughuul’s bidding. They even show the lads "snuff films" of their own past misdeeds.

And, after all, the script suggests, Clint is somewhat cruel and controlling. Perhaps he has it coming?

The finale involves crucifixion imagery in a cornfield. This has less to do with religious allegory than with the well-established fact that there are only so many ways for a demon to dispose of his victims on a limited budget.

The film contains a vengeance theme, frequent violence, much of it involving children, numerous disturbing images as well as considerable profanity and rough language. The Catholic News Service classification is L — limited adult audience, films whose problematic content many adults would find troubling. The Motion Picture Association of America rating is R — restricted. Under 17 requires accompanying parent or adult guardian.