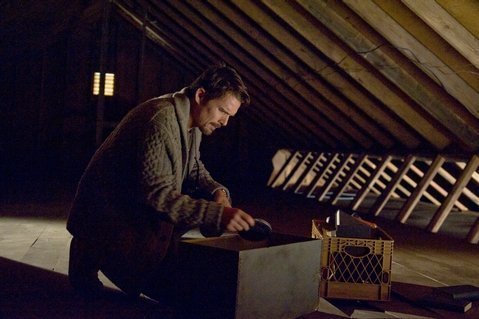 NEW YORK (CNS) — The scariest element in "Sinister" (Summit) is the idea that evil spirits have 8 mm home movie equipment and know where and how to get their films developed.

Audience members of a certain age may sit there expecting the undead to start tooling around in souped-up Camaros with 8-track tape players. What’s next — haunted lava lamps?

Director Scott Derrickson, who co-wrote the screenplay with C. Robert Cargill, invents an evil spirit known as Bughuul, whom certain children call Mr. Boogie. Bughuul (Nicholas King in a white mask) has been around for centuries, and was even, according to a Professor Jonas (Vincent D’Onofrio) "known to the early church." Ooh!

Bughuul exists in different mediums of art — frescos, woodblock prints and, obviously, Kodachrome. Though technologically backward — he hasn’t even made the leap to videotape yet — Bughuul uses art to lure children into murdering their families.

This slowly becomes apparent to famed true-crime writer Ellison Oswalt (Ethan Hawke) after he moves from his Connecticut mansion to a rambling brick ranch house in central Pennsylvania to investigate an unsolved crime.

Four family members were hanged in the backyard of the property, but one daughter appears to have escaped.

Oswalt not only greatly annoys wife Tracy (Juliet Rylance) but puts kids Trevor (Michael Hall D’Addario) and Ashley (Clare Foley) in harm’s way with the move. And things only get worse after Oswalt discovers a box of old home movies in the attic, documenting three other ritual murders around the country over decades. As luck would have it, there’s even an old projector with a working bulb stashed away up there.

Mayhem ensues, of course, but without much gore. The hanging, particularly, is replayed several times, with no resolution to the mystery until Bughuul thoughtfully provides more found footage with all the stuff he’d previously excised.

The film contains brief but explicit scenes of violence, some of it directed against children, grisly images, fleeting profanity and occasional rough language. The Catholic News Service classification is L — limited adult audience, films whose problematic content many adults would find troubling. The Motion Picture Association of America rating is R — restricted. Under 17 requires accompanying parent or adult guardian.