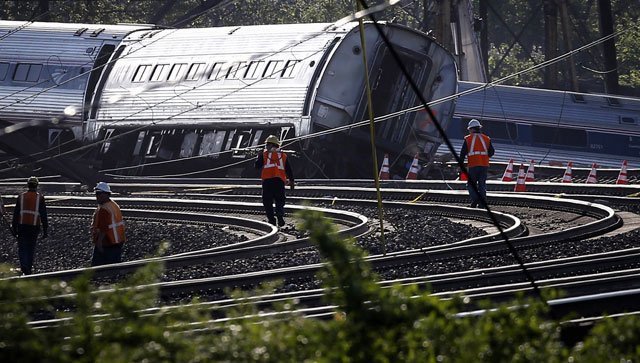 Men walk toward the site of a derailed Amtrak train in Philadelphia May 13. Philadelphia Archbishop Charles J. Chaput urged prayers for all affected by the May 12 derailment in the city's Port Richmond neighborhood that left at least six people dead and injured more than 200 others. (CNS photo/Mike Segar, Reuters)

PHILADELPHIA (CNS) — The wailing of sirens called Father Tom Higgins from his parish rectory and Sisters Linda Lukiewski and Julie Sertsch from their convent to the scene of the Amtrak train derailment the evening of May 12.

At about 9:30 p.m., the TV news reported the wreck of Amtrak’s Northeast Regional Train 188, which started in Washington and was headed for New York City. Aboard were 238 passengers and five crew members.

The crash left at least eight people dead and injured more than 200 others, with at least eight in critical condition. Most of the injured were treated at nearby hospitals and released.

Philadelphia Mayor Michael Nutter described the crash scene to reporters as "an absolute, disastrous mess. I’ve never seen anything like this in my life."

The train’s engine and two of the cars were left standing upright. Three other cars fell on their sides, and a sixth car was flipped over almost on its roof.

A team from the National Transportation Safety Board arrived by early morning May 13 to lead an investigation into the cause of the accident. AP reported that information retrieved from the train’s data recorder indicated the train was going 106 mph in an 80-mph zone before it entered a sharp curve, where the top speed allowed is 50 mph.

The immediate area where the train derailed is also the junction where trains headed to southern New Jersey are switched to other tracks.

"That’s only two blocks from here," Sister Linda exclaimed when she heard the location, near St. Joan of Arc Convent in Philadelphia’s Harrogate area. She and Sister Julie, both Sisters of St. Joseph, hurried over to get as close as they could and try to help in any way.

Meanwhile, Father Higgins, also mystified by the persistent sirens, heard the same news report, and realizing he was now the closest priest to the scene he decided to drive over.

Pastor at Holy Innocents Parish in the Juniata Park section of Philadelphia, the priest could only drive halfway to the crash site before hitting roadblocks, so he walked the rest of the way.

It was chaotic when he arrived as close as he was permitted. A police officer directed him to a spot where some passengers whose injuries did not require immediate transportation to a hospital were to be placed on buses to be taken to a triage point, in this case the nearby Webster Public School.

Father Higgins went to the school and found Sisters Linda and Julie were already there, assisting as best they could.

He was able to talk to some of the families and comfort them.

"I spoke to a family from Singapore here on vacation; there were two daughters, a brother and sister-in-law. The parents had already been sent to Einstein Hospital. The rest were OK except one of the girls had badly injured her leg. They put her in a wheelchair and the family went to another hospital.

"I didn’t have to give anyone the sacrament of the sick or last rites. No one there was that critical, thank God," he told CatholicPhilly.com, the news website of the Archdiocese of Philadelphia.

Sisters Linda and Julie had arrived just as the Red Cross and paramedics were setting up.

"We brought them water, cookies and coffee," Sister Linda said.

Those people who did not have injuries sufficient to require further treatment were free to go, and while Amtrak would eventually provide transportation to their destination it was not immediately forthcoming because the railroad was shut down.

Sister Julie offered to drive a group of five people to Trenton, New Jersey, where they hoped they could continue the rest of their journey. When they arrived in Trenton, there were no trains running north from there either. Although three of the people either had cars or family to pick them up, a young married couple who were headed for New Brunswick, New Jersey, had no means to get there.

Without hesitation Sister Julie drove them to New Brunswick before returning to her convent for a scheduled 7 a.m. departure on a planned trip to Vermont.

For all three — Father Tom, Sister Linda and Sister Julie — there wasn’t a need to put their lives at risk although they would have done so.

"We didn’t do anything spectacular," Sister Linda said. "We just tried to do what we could and it was no more than as Christians we should do."

In a statement issued the morning after the crash, Philadelphia Archbishop Charles J. Chaput urged prayers for all affected by the train derailment.

"I urge all people of goodwill to join me in extending prayerful condolences to those mourning the sudden loss of a loved one and in asking the Lord to bring healing to all those suffering physical and emotional anguish in the wake of this incident," he said.

"Let us also pray for all of the first responders, emergency personnel, and medical professionals who have been working to assist those affected by the derailment," he added. "May God bless and protect them."

Vice President Joe Biden said in a May 13 statement: "Our thoughts are with every person who is grieving right now from this terrible tragedy. As a nation, we pray for the victims and their families."

"Amtrak is like a second family to me, as it is for so many other passengers," he said. "For my entire career, I’ve made the trip from Wilmington (Delaware) to Washington and back. I’ve come to know the conductors, engineers, and other regulars — men and women riding home to kiss their kids goodnight — as we passed the flickering lights of each neighborhood along the way."

Baldwin is a freelance writer in Philadelphia.