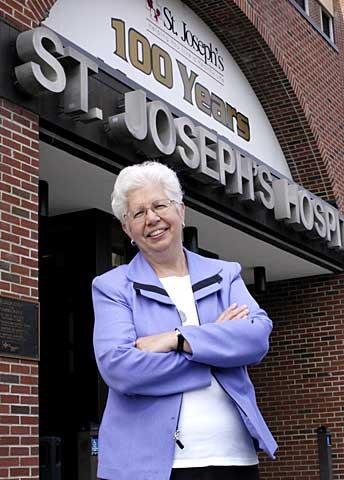 Sister Marie Castagnaro stands in front of St. Joseph's Hospital in Elmira June 13, 2008. She retired as president and chief executive officer of the hospital on March 19.

Don’t be surprised to find a "Gone Fishing" sign hanging on the office door formerly occupied by Sister Marie Castagnaro.

For her, that expression is more than a nod to her recent retirement. Since fishing is actually one of Sister Castagnaro’s favorite hobbies, she may just be casting a line somewhere.

"It’s kind of been in the works for awhile now," Sister Castagnaro said, noting that she’s put off retirement a couple of times to finish up a couple of key projects at the hospital.

Sister Castagnaro was only the sixth administrator in the 102-year history of St. Joseph’s, a 295-bed not-for-profit acute-care facility. She said her administrative decisions have consistently been molded by the hospital’s founding Sisters of St. Joseph, who sought to create a Catholic hospital that welcomed all.

"Remember the mission and serve the poor and vulnerable — that has always been a pillar of St. Joseph’s, and continues to be a pillar," she said.

"Sister Marie has been remarkable in continuing to sustain the founding dream," remarked Sister Mary Louise Mitchell, president of the Sisters of St. Joseph of Rochester, who added that Sister Castagnaro’s greatest legacy will be "that she continued to find ways to provide health care to the poor and most vulnerable individuals of Elmira."

"In my mind she embodies the mission of the Sisters of St. Joseph congregation. She has a passion for her patients and institution," added Don Hartman, the hospital’s board chairman the past three years, who has assumed the hospital’s leadership duties on an interim basis while a nationwide search is conducted for a permanent replacement.

"On many occasions after putting in a 10- or 11-hour day, Sister could be heard to say that she was going to visit a patient," he noted. McNamara added that Sister Castagnaro’s tenure has been "stellar," saying she has led "with a professional, business-like ‘MBA mentality’" while instilling in her employees "a truly prayerful and compassionate approach to serving our neighbor."

Sister Castagnaro, 65, was born in Brooklyn, grew up in St. Michael Parish in Rochester and entered the Sisters of St. Joseph in 1962. She taught at Guardian Angels School in Henrietta from 1966 to 1974.

In 1974, not yet 30 years old, Sister Castagnaro was appointed principal of St. Paul School in Oswego, in the Diocese of Syracuse. In 1979 she became vice principal at St. Agnes High School in Rochester, serving at the all-girls’ institution until it closed in 1982.

Over the next few years Sister Castagnaro pursued education and training for a career in Catholic health care, beginning her tenure at St. Joseph’s in 1985. She served as the hospital’s planning assistant, vice president of clinical services and executive vice president/chief operating officer before becoming president/CEO in 1988.

Sister Castagnaro said she’s proud of initiatives that began in her early years at St. Joseph’s and have endured, such as alcohol rehabilitation services and an inpatient psychiatric unit. Other career highlights are the opening of a health-services building, featuring such offerings as a kidney dialysis center and Veterans Administration clinic; and the creation of apartments for people with limited incomes. She has served on numerous boards and committees and been accorded with many honors.

Hartman said Sister Castagnaro strove hard this past year to put St. Joseph’s on better financial footing, and that he’s been amazed at her energy even with retirement in the offing. Now, as that phase of her life begins, Sister Castagnaro said her immediate plans are to "go on extended retreat and get my head together and decompress a bit." She will move back to her hometown of Rochester: "My family is all there and my congregation is there. I also hope to do a little traveling, to see some friends I haven’t seen in some while."

And, Sister Castagnaro is itching to do some fishing. She said she enjoys fishing for salmon and brown trout, and though she’s not too concerned about what she catches — "I throw most of them back" — she does crave the peaceful setting that fishing offers.

"I find it really does help me to clear my head. It helps you to focus on things in a different way," she said.

Her leisurely days ahead will be filled with good memories. Sister Castagnaro said her years at St. Joseph’s have been enhanced by "the wonderful experience of meeting lots of good people here in Elmira. I’ve worked hard to build relationships, which is what good business is all about."

The most special of those relationships, she stated, are with staff members of St. Joseph’s.

"The thing I’m going to miss is the people around here. They are truly, truly committed to what they do on a daily basis," she said.