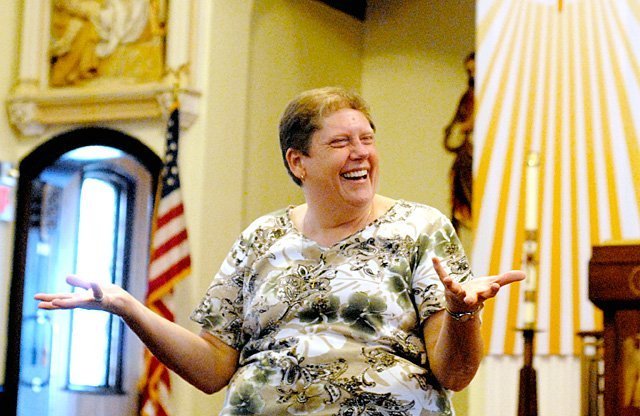 She has spent the past several years guiding parish communities. Now Sister Karen Dietz, SSJ, is applying her leadership skills toward a religious community — her own.

Sister Dietz was elected in mid-July by her fellow women religious to the four-person leadership team of the Sisters of St. Joseph of Rochester. She will begin her new position in late August.

With this appointment, Sister Dietz concludes her tenure as pastoral administrator of St. Agnes Parish, Avon; St. Rose, Lima; and St. Paul of the Cross, Honeoye Falls. She had served since 2006 in Avon and since 2010 in Lima and Honeoye Falls.

Sister Dietz, who will turn 56 on Sept. 18, entered the Sisters of St. Joseph in 1986 and made her permanent vows on Dec. 8, 1990. Prior to her arrival at St. Agnes, she served for nine years as diocesan coordinator of sacramental catechesis and evangelization. The position in Avon was her first as a pastoral administrator.

"We worked really hard. I grew into the ministry with the people of St. Agnes," she told the Catholic Courier.

Four years after she began in Avon, Sister Dietz also became administrator of St. Rose Parish — which, like St. Agnes, is in northern Livingston County — as well as St. Paul of the Cross in southern Monroe County as the three churches formed a cluster.

"The clustering process has not been easy. I don’t think it’s easy anywhere, to be honest," Sister Dietz remarked about the model by which clergy, staff, programs and events are shared among two or more parishes.

However, Sister Dietz said the transition has gone well in several respects. For instance, she cited a rise in the number of baptisms among the three churches as well as a solid faith-formation program.

"The families are great families," she said, adding that parishioners in general "support and love one another" in their small-town parish communities.

Now Sister Dietz will strive to spread love and support among the Sisters of St. Joseph. Her election to the leadership team came at the conclusion of the Rochester community’s chapter gathering, which took place July 12-18 and occurs once every four years.

Sister Dietz will serve as one of two councilors for the congregation. Asked what her responsibilities will entail, she said, "What I know is that we do a team approach to leadership. And so the four of us are responsible for kind of holding, if you will, the care of the congregation of the Sisters of St. Joseph in all of its aspects — individual members, local communities, various ministries, all the finance and property issues that go along with that."

She will be installed Aug. 29 at the SSJ motherhouse along with the three other new leadership-team members: Sister Sharon Bailey, president; Sister Marilyn Pray, vice president; and Sister Mary Ann Mayer, councilor. They will oversee a congregation that performs a wide range of ministries throughout the 12-county Diocese of Rochester, as well as in rural Alabama and Brazil. The Sisters of St. Joseph have served in this diocese since 1854.

This is Sister Dietz’s first role exclusively devoted to her religious congregation after having spent most of her career in diocesan and parish roles.

"I really see it as just another way to be of service," she said, adding that she is "honored and humbled" her fellow sisters deemed her worthy enough of a leadership role to elect her.

Sister Dietz expressed feelings of humbleness about the people of St. Agnes, St. Rose and St. Paul of the Cross as well.

"Being able to help so many along the way and to be so enriched by the lives of each of you has been a real gift," she wrote in a July 26 bulletin article announcing her transition. "I will miss you more than you know."