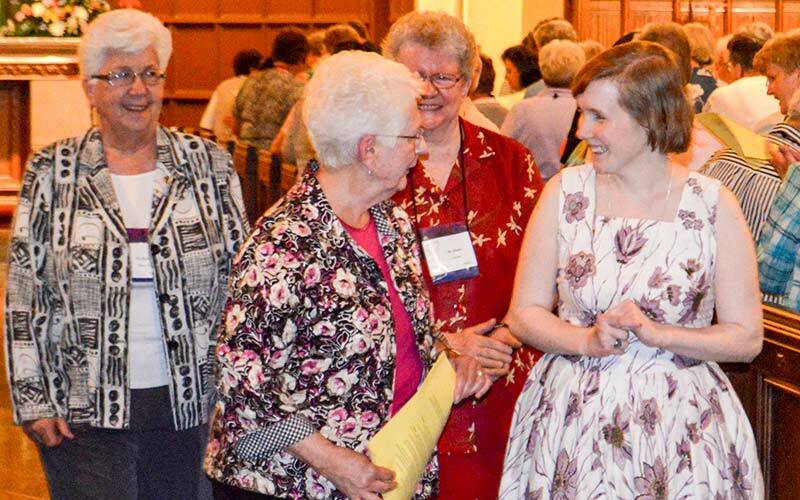 Sister JoAnne Courneen (left) speaks with Sister Colleen O’Toole (right) during the 2015 ceremony in which Sister O’Toole was accepted as a novice in the Sisters of Mercy. (Photo by Gary Loncki)

Back in 2007, Colleen O’Toole’s classmates at Our Lady of Mercy School for Young Women voted her most likely to become a Sister of Mercy. She always suspected those votes were cast in jest.

“I don’t know why they thought that. I don’t think people were genuinely thinking about my religious vocation,” she mused.

A background of service

The call to religious life came as a bit of a surprise for Sister O’Toole. A Walworth native, she grew up worshipping at St. Joseph Parish in Penfield with her family and attended St. Joseph School. As a teen, she was involved with St. Joseph’s youth group.

Her parents, John and Liz O’Toole, were models of service for their children, said Sister O’Toole, who has two sisters and a brother.

“We were always volunteering and helping people,” she remarked.

John O’Toole has been a volunteer firefighter for many years, and the family always helped at the fire department’s chicken barbecues and pancake breakfasts. And it wasn’t unusual to find Liz O’Toole doing something like baking a loaf of bread for a neighbor she’d noticed was ill, Sister O’Toole said. The family also frequently volunteered at the local soup kitchen and participated in benefit walks.

“It was always that attitude of, if I can help someone, I will. That was the expectation. We’ve been given so much, so we should help people,” she explained.

After graduating from Mercy in 2007, Sister O’Toole majored in religious studies at Smith College in Massachusetts. After graduating in 2011, she wasn’t quite sure if she should look for a job or continue her education.

“Nothing felt quite right,” she remarked.

She joined the Mercy Volunteer Corps and spent a year teaching math to women and young girls in Detroit. She lived in community with fellow volunteers and worked alongside Sisters of Mercy.

“I got to know the sisters on a personal level. I (learned) I really love them. I love their life. I love the way they talk about their spirituality. I love the community,” Sister O’Toole said.

By the end of that yearlong experience she had decided to formally start the process of discerning whether she was being called to life as a Sister of Mercy. She completed that process back home in the Diocese of Rochester, where she spent several months talking with the Sisters of Mercy’s vocations minister.

Sister O’Toole already knew a lot about the congregation from her years at Our Lady of Mercy and her time in Detroit, so many of her conversations with the vocations minister centered around Sister O’Toole’s feelings of inadequacy, she said.

Eventually, Sister O’Toole came to understand that God was calling her just as she was. She entered the congregation in 2013 as a candidate, living in community with Sisters of Mercy and doing some ministry work, yet also working at at outside job and paying her own bills. In 2015 she was accepted as a novice in the Sisters of Mercy, and she professed her temporary vows in 2017 at the conclusion of the two-year novitiate. She will profess her permanent vows May 28 at Cincinnati’s Church of the Resurrection, where she served during the second year of her novitiate.

Sister O’Toole currently serves as pastoral minister at St. Bernadette Parish in Orchard Park in the Diocese of Buffalo. Her job description there is to do “whatever the people of the parish need,” she said, noting that she’s involved in everything from planning baptisms and funerals and working with the parish’s Rite of Christian Initiation of Adults and religious-education programs to helping with the parish garden, with home and nursing-home visits and Bible-study groups sprinkled in the mix as well.

“I think part of my journey has been learning that it is continually unfolding. What I perceive as my vocation now, my relationship with God, it’s going to grow,” Sister O’Toole said. “I’m excited to see what’s next.”

Tags: Monroe County East, Religious Orders
Copyright © 2022 Catholic Courier, Inc. All rights reserved. Linking is encouraged, but republishing or redistributing, including by framing or similar means, without the publisher's prior written permission is prohibited.