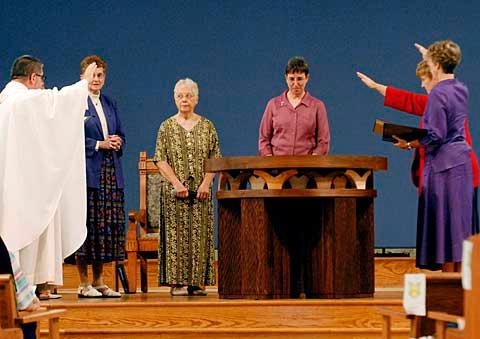 ROCHESTER — With the blue screen at St. Monica Parish wrapping her like a mantle, Sister of Mercy Laurie Orman took a deep breath and recited from memory vows that "startle and challenge us" according to her fellow Sister of Mercy Cynthia Serjak.

"I vow and promise to God chastity, poverty, obedience and service to the poor, sick and ignorant, and to persevere unto death," Sister Orman said during the Mass.

As she finished, Sister Orman’s friends, family and fellow sisters of Mercy collectively exhaled, laughed jubilantly and burst into applause as she stepped up to sign the profession document.

St. Monica was full as Sister Orman celebrated her perpetual profession Sept. 11 in a ritual that drew attendees from throughout the Sisters of Mercy of the Americas New York, Pennsylvania and Pacific West Community and local parishes including Holy Ghost, Holy Trinity and St. Monica.

"This is a wonderful day for her, but it is such a celebration of fidelity," said Sister Nancy Hoff, president of the Sisters of Mercy of the Americas New York, Pennsylvania, Pacific West Community. "It’s a sign of hope. It’s a reminder to us of our commitment to God and what we have in life."

She noted that the fourth vow Sister Orman took of service to the poor, sick and uneducated is unique to the Sisters of Mercy, and reflects Mercy’s foundress Catherine McAuley’s desire to have sisters serving the community in her native Ireland. Sisters of Mercy became known as the "walking nuns" for their willingness to serve their community within the community.

The sisters’ emphasis on service, especially with women and children, connects with today’s young adults, said Sister Serjak, who, as Sister Orman’s incorporation minister, guided her throughout the seven-year process to her perpetual vows. She noted that the Sisters of Mercy New York, Pennsylvania, Pacific West community has 42 members in various stages of incorporation, meaning they have not yet made their perpetual profession of vows.

"They recognize a strong commitment to serve and they don’t want to do it alone," she said. "They want to connect with people with which they can have an impact in the world."

She said Sister Orman came to the Sisters of Mercy with a deep spirituality and a deep love of what God was asking of her.

"The joy in her kept growing and today it is overflowing," Sister Serjak said.

Sister Orman said it was an indescribable feeling to lie prostrate in front of the altar during the Litany of Saints. She also was presented with her profession ring, which was her father’s wedding ring, and she noted that he had encouraged her on the path to becoming a sister, even though he lived only a few weeks into her journey.

"It was as if my dad saw something I hadn’t even seen yet," Sister Orman said.

It was on a wilderness retreat in Seneca Rocks, W.Va., about eight years ago that Sister Orman discerned a call to become a woman religious.

Sister Orman said she returned to the spot in August to rock climb again as a way to prepare for her perpetual profession.

"I felt like I was being called back to the mountain," said Sister Orman, who became youth minister at Holy Trinity Parish in Webster in August.

Sister Orman grew up in Rochester and attended several parishes, but attended Holy Ghost after graduating from Gates-Chili High School. She attended State University of New York at Brockport and worked for a bank for five years before working as Holy Ghost’s youth minister and as its faith-formation director.

After hearing the Sister of Mercy’s vocations director speak, and attending the rock-climbing retreat, Sister Orman began the process to become a sister. During that time she worked as coordinator of catechist and family formation with the diocesan Office of Evangelization and Catechesis and as a staff member at the Mercy Prayer Center, where she coordinated hospitality and presented several programs.

She said that as a youth minister and as a sister, her profession helps to provide an example for young people about religious vocations.

"It’s a witness to help the young people see other ways of life in living out their baptismal call," Sister Orman said.