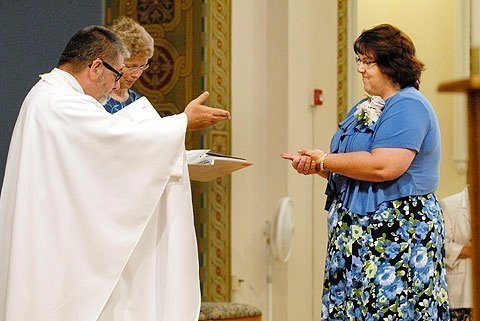 Father Ray Fleming blesses Sister Laura Bishop’s ring before she puts it on during her perpetual profession of vows Sept. 1 at Rochester’s St. Monica Church.

Sister of St. Joseph Laura Bishop said there were times when she actively resisted a religious vocation.

It took at least 15 people asking her whether she felt called, and other family members recognizing the call in her, before she began to recognize it in herself.

Yet Sister Bishop, 39, said she is now struck by the joy she has found in religious life.

She professed her final vows of poverty, chastity and obedience as a Sister of St. Joseph in a ceremony Sept. 1 at St. Monica Church in Rochester. In addition to her, two other women are in stages of initial profession with the congregation in Rochester.

Sister Donna Del Santo, vocations director for the Sisters of St. Joseph, said Sister Bishop has a great love for the church and for the people of God, and she is committed to promoting justice.

"Laura loves the community, and she loves her family," Sister Del Santo said. "She brings all that with her, and it makes us all richer."

A graduate of St. Salome School and a 1991 graduate of Bishop Kearney High School, Sister Bishop also received a bachelor’s degree in psychology from SUNY Brockport and a master’s degree in pastoral ministry from St. Bernard’s School of Theology and Ministry in Pittsford. She is currently working on a graduate degree in social work at Boston College.

She was drawn to the Sisters of St. Joseph while she worked at Nazareth College in the Registrar’s Office. She also got to experience religious life firsthand when she participated in Urban Plunge, an annual weeklong peace-and-justice immersion experience run by the Sisters of St. Joseph Volunteer Corps. During the week, college students live in community, serve and pray in the city of Rochester and reflect at night on their experiences. Young people are encouraged to think about the barriers that people in poverty face, such as a lack of adequate transportation and a lack of access to fresh produce.

Sister Bishop said that experience prompted her to move in with the sisters in 2004 because she wanted more experiences like that.

"I didn’t move in with the intention of entering," she noted, yet by the end of 2004, she did just that.

She said she was drawn to the Sisters of St. Joseph because of the work they do.

"For me it was the direct way they lived out their baptismal call and their radical commitment to serving those on the margins," Sister Bishop said.

During her candidacy program, she continued to work full time at Nazareth College, and she joined a discernment group.

She became a novice in mid-2005, at which point she moved to the motherhouse in Pittsford. After that, she moved into a home in Framingham, Mass., with women from the United States and Canada who were discerning a vocation with congregations that are part of the Federation of the Sisters of St. Joseph. During that time, she learned more about the history and mission of the Sisters of St. Joseph.

During her two-year novitiate, she also assisted the activities director at St. Joseph’s Place at the Sisters of St. Joseph Motherhouse in Pittsford, where sisters who need the highest level of care or who are experiencing dementia are cared for. She also spent time in Hornell as a chaplain in spiritual care with St. James Mercy Hospital and worked at Henrietta’s School of the Holy Childhood in the weaving room.

She professed her first vows on June 9, 2007, and had the opportunity to visit Sisters of St. Joseph missions in Brazil and rural Alabama.

"Both (trips) were not long enough, but it was what we could do at the time," Sister Bishop said.

After that, she worked at the former Nazareth Academy as a campus minister.

In the last four years, she has served as codirector of Bethany House, a Catholic worker home that helps women who are homeless, victims of domestic violence or coming out of incarceration. In addition to being a residence for up to 10 women and several children, the home provides a food pantry and such services as telephones and showers for those who need them.

Sister Bishop said her time spent at Bethany House helped her decide to pursue a graduate degree in social work from Boston College; the two-year program has a special emphasis on youths and families.

"I don’t feel like this is a forever goodbye," Sister Bishop said of attending college in Boston. "This is for now. It’s very much in my heart to work with these women and children again."