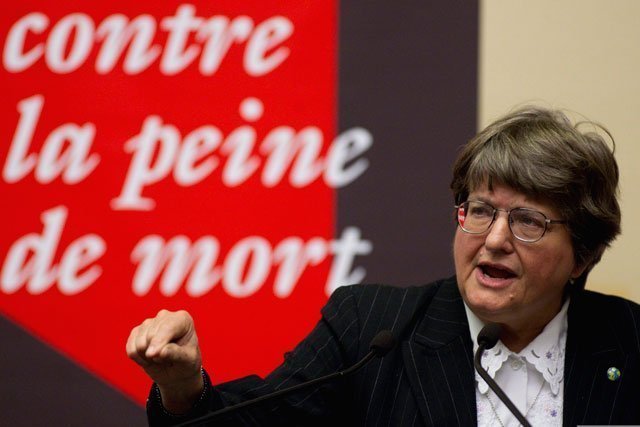 Sister Helen Prejean, a Sister of St. Joseph of Medaille, and an advocate for the abolition of the death penalty, is pictured in a 2010 photo in Geneva. The defense team for convicted Boston Marathon bomber Dzhohar Tsarnaev called Sister Prejean to testi fy May 11 about her visits with him.

Sister Prejean, the Sister of Saint Joseph of Medaille and author of, "Dead Man Walking," said during the defense’s portion of the sentencing phase of Tsarnaev’s trial that she had met with him five times since March. In their conversations, she said, he eventually discussed his feelings about the victims of the April 15, 2013 bombing that killed three and left more than 260 people injured.

"He said emphatically, ‘No one deserves to suffer like they did,’" Sister Prejean told the jury, according to various news sources. She said she believed Tsarnaev was sincere in the regret he voiced.

A police officer was killed a few days later as law enforcement officers closed in on Tsarnaev and his brother elder brother Tamerlan. Tamerlan Tsnarnaev was killed in a shootout with police before Dzhokhar was captured.

Although he pleaded not guilty to the charges against him, as his trial opened, Tsarnaev’s attorney acknowledged he had a role in the bombings. The defense strategy through the main trial and the penalty phase focused on the influence of the elder brother as the principal organizer of the crimes. Tsarnaev was convicted of all 30 counts on which he was indicted, including use of a weapon of mass destruction resulting in death. Some of the charges carry the possibility of the death penalty.

Sister Prejean said she was invited by Tsarnaev’s attorneys to meet with him. Following her testimony, the defense rested its case, after more than two weeks in which dozens of witnesses sought to soften his image before jurors decide his sentence.