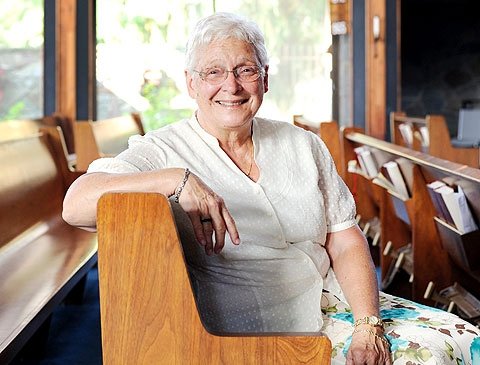 Sister Joan Sobala will retire at the end of June.

Even as a child Joan Sobala knew she was called to be a woman religious. She felt a yearning to belong to a religious order, and no matter what she did, she couldn’t shake that calling.

"At one point in my youth I even had my children’s names picked out, thinking I could sort of sidetrack myself, but it never really worked out. God and I had this thing from the beginning," she mused.

She pursued that vocation the first chance she got, and today Sister Joan Sobala has belonged to the Sisters of St. Joseph of Rochester for 53 years. Her vocational commitment will last a lifetime, but at the end of June she will retire from her current position as pastoral administrator at the clustered parishes of Our Lady of Lourdes in Brighton and St. Anne in Rochester.

Sister Sobala has led the cluster since 2007, but she’s been a pastoral administrator since 2003. Her first such assignment was at another pair of clustered parishes — St. Felix in Clifton Springs and St. Francis in Phelps. The two communities had been clustered for several years when Sister Sobala arrived, but during her tenure they devoted more effort than ever before to coming together as one, she said.

The Finger Lakes assignment led directly to her current position in 2007. In both clusters, Sister Sobala drew diverse communities together and tried to involve lay people as much as possible.

"The work of shaping parishes belongs to everyone, not just pastoral leadership and staff," she said. "Parishes grow and thrive when people work together, and I’ve had that experience and I’m very grateful for it."

Before becoming a pastoral administrator, Sister Sobala had served the Diocese of Rochester in a variety of ways. She taught courses at the high-school and college levels and served as chaplain at the University of Rochester and the Eastman School of Music. From 1982-1998, she was pastoral associate at St. Mary Parish in Rochester, where she oversaw the formation of the Downtown Community Forum discussion series. After leaving the Rochester parish she took a yearlong sabbatical before serving as vice president of her congregation from 1999 to 2003. Along the way, she also cohosted an inspirational radio program called "Good Morning, God" and was involved in promoting women’s full participation in the church.

After retiring she plans to take a six-month sabbatical before returning to ministry in an as-yet-undecided form. She said she’s grateful for the opportunities she has had to serve God’s people.

"People do hunger and thirst for the things of God," Sister Sobala said. "Walking with them through the joys and sorrows of their lives is humbling because we see how God works in their lives."