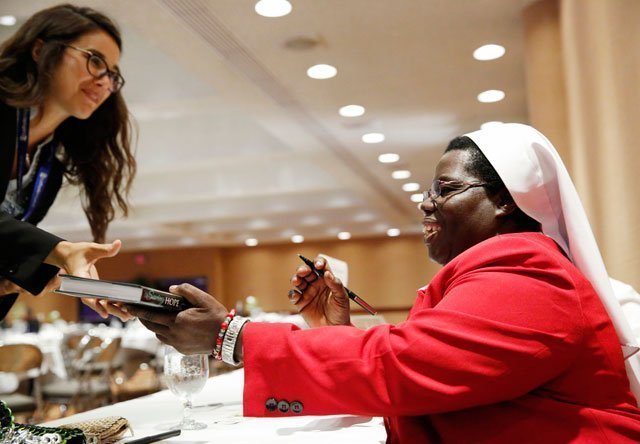 Sister Rosemary Nyirumbe signs copies of her book "Sewing Hope" for people attending the Catholic Media Conference in Buffalo, N.Y., June 24. The book tells of her fight to save young women in Uganda from the perils of war and the Lord's Resistance Army.

BUFFALO, N.Y. (CNS) — Sister Rosemary Nyirumbe said "in a million years" she never thought she would be a religious sister.

But she was so impressed with the work of the Sisters of the Sacred Heart of Jesus, dubbed the "running nuns" for their efforts in helping refugee children in Uganda and South Sudan, that she joined the order.

She told participants at the Catholic Media Conference in Buffalo June 25 that her motivation for joining, mainly because she liked children, may have been childish at the time but her vocation has continued to evolve.

Now it primarily involves helping young women who were formerly held captive by Joseph Kony, former leader of Uganda’s Lord’s Resistance Army, to receive an education and learn sewing skills to provide for their families.

Many of these women had been abducted, raped, tortured and forced to kill their own family members as soldiers in Kony’s army.

Since 2001, more than 2,000 women have not only found safety but learned skills at St. Monica’s Vocational School in Gulu, Uganda, directed by Sister Rosemary. In her words: "They are fighting back with needles and sewing machines and not with machine guns."

In her keynote address at the media conference, she described daily challenges of helping those still suffering from wounds of violence that many in the world have forgotten about.

She urged the group of Catholic journalists and communicators to tell the story of how these women are making steps to recovery, documented in the new movie "Sewing Hope."

"Africa is being saved by African women," she said, noting that if it sounds like she is "gender sensitive," it is because she is.

She is focused on getting the story out not only to raise awareness for the women in her care but to "be sure that it doesn’t happen anywhere else."

She wants to "let these girls know life can be changed … their dignity can be restored."

The next step is to give them a voice, Sister Rosemary said, noting that she would like these women to tell their own stories explaining the pain they went through.

An ideal outlet for this would be through the media, she said, stressing that reporters should "not sugarcoat evil" and can bring an end to violence by speaking up about its impact. Catholic media in particular, she said, has a history of standing up for wrongs.

"You have an important job of stopping evil," she told the group, suggesting that they visit her ministry in Uganda and see it firsthand.

"It is not old news. This is something affecting humanity," she said, urging them to find out "how you can talk about it" and "how you can help us."