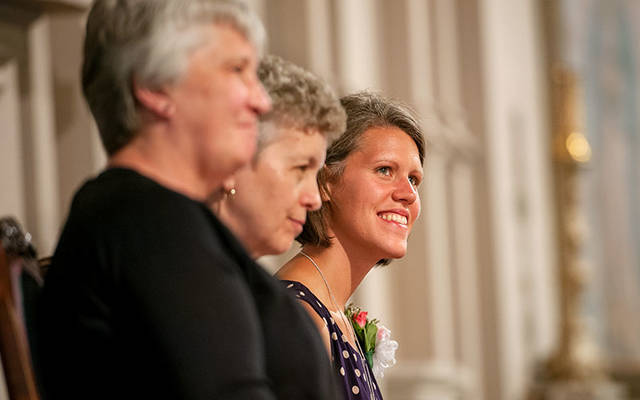 Sister Anita Kurowski (right) smiles as she sits with Sister Mary Lou Mitchell (center) and Sister Anne Alderman during the profession of her finals vows as a Sister of St. Joseph of Rochester Aug. 30, 2014. (File photo)

Sister Lisette O’Brien entered the Sisters of Mercy in 1948, just one month after turning 18, and she knew her life was about to change dramatically.

“It was kind of expected when a girl entered the convent that she was going to withdraw from the world. It meant not going home. We could teach or we could work someplace, but you couldn’t go home until you were professed in your fourth year,” she recalled.

The formation process for women who enter local congregations of women religious has undergone some significant changes in the ensuing 70 years, however, according to several Sisters of Mercy and Sisters of St. Joseph.

“It used to be that during this period of formation there was a focus on leaving the world behind, leaving your family behind and taking this new identity,” affirmed Sister Cynthia Serjak, director of the new membership office of the Institute of the Sisters of Mercy of the Americas. “Now it’s much more (about) what are the gifts you bring with you and how can you still be connected to the people you care about, given that you’re giving your entire life to the pursuit of being a sister?”

The basic structure and time frame of the formation processes used by the local women’s congregations has not changed too much, but significant changes have taken place in the way that time is used, noted Sister Donna Del Santo, vocations director for the Sisters of St. Joseph of Rochester. These days, a woman discerning a call to become either a Sister of St. Joseph or a Sister of Mercy first completes an inquiry phase, during which she meets with the respective community’s vocations director and familiarizes herself with the community’s charisms and ministries. If this period affirms the woman’s calling to join the community, she then will go through a formal application process.

At the successful completion of this process, the woman will enter a candidacy phase, which usually lasts about two years. During this time candidates learn to adjust to religious life and living in community, and determine whether the lifestyle is a good fit for them, Sister Del Santo said. Candidates discerning a call to the Sisters of Mercy usually study theology during the candidacy phase, while candidates pursing a vocation as a Sister of St. Joseph typically study theology in the next phase, known as the novitiate.

The novitiate phase generally lasts about two years for a woman entering either community. During the first year of the novitiate, the woman spends a great deal of time discerning her potential calling, deepening her relationship with God and serving in ministry. Each woman in the novitiate is in regular communication with her novice director, and if the director, the novice and the congregation’s leader all agree the woman is progressing well and has satisfactorily completed the novitiate period, the next step for that woman is the profession of temporary vows.

Sisters of St. Joseph and Sisters of Mercy profess vows of chastity, poverty and obedience; Sisters of Mercy also take a vow of service to the poor, sick and ignorant. The period of temporary profession lasts from three to six years, depending on each individual’s unique circumstances and the progression of her discernment process. During this time the new sisters engage in ministry and study while continuing their discernment and living in community with other sisters.

At the end of the period of temporary profession, if the woman, her directors and the leadership of her congregation all agree she is called to this way of life, she will be approved to make her perpetual or final profession of vows.

At first glance, the process looks similar to the one used in the formation of Sister O’Brien and Sister Marie Marshall, who also is celebrating her 70th jubilee as a Sister of Mercy this year.

“What has changed a lot is the content, and that’s because religious life has changed a lot, and the church and the world have changed a lot,” Sister Serjak said. “I think for apostolic communities like us who are really eager and committed to responding to the needs of our time, we have to keep changing.”

“We have a responsibility to each other and the people of God to be updated,” agreed Sister Del Santo, who this year is celebrating her 25th jubilee as a Sister of St. Joseph.

Changes made by the two orders largely are due to the Second Vatican Council, which called women religious to study the Gospel, the lives of their founders and their charisms, and read the signs of the times, Sister Serjak said. Leaders of the various communities of women religious realized that their sisters needed a stronger theological background, for example. So women going through the formation process in recent years spend much more time studying theology than did their counterparts from several decades ago, Sister Del Santo explained.

“Our sisters at first vows take a course in cosmology, how to interpret what science is telling us about the universe and our planet and the human community in the light of Jesus Christ and who he was and what he did and the culture of the contemporary world,” Sister Serjak added. “That’s a conversation that’s going on in the world, and we want our women to be able to enter into that.”

Sisters Serjak and Del Santo both cited the vow of obedience as an example of a change that has taken place in the formation process. Sisters in formation always have studied the vows they will take, but their understanding of those vows has changed since Vatican II, they agreed.

In the past this vow was commonly understood to mean that sisters were required to listen to and obey their superiors. Today, however, sisters in formation learn that vowing obedience is more about listening to God and what he is asking of them, Sisters Del Santo and Serjak said.

This understanding falls in line with another change in the formation process, which involves allowing participants to have more of a voice in the direction of their vocational paths, Sister Serjak added. When Sister Marshall entered the Sisters of Mercy in 1948, for example, there were only two ministerial options for the sisters. They could either teach or become nurses, she recalled.

“You were just told what to do. You could be (trained as a teacher), even if you had mentioned that you’d like to be a nurse,” Sister Marshall said.

“When I entered the congregation I had hoped to become a nurse, but instead became a teacher,” noted Sister Marie Michelle Peartree, who this year is celebrating 75 years as a Sister of St. Joseph.

In recent years, those who work with aspiring sisters have begun to ask how they see themselves serving, what needs they see in the contemporary world and how they would like to respond to those needs, Sister Serjak said.

These shifts in the way women are formed for religious life at first was difficult for some of the older sisters to adjust to, but over time most have come to understand why these changes are being made, she added.