Sisters go where the needs are - Catholic Courier 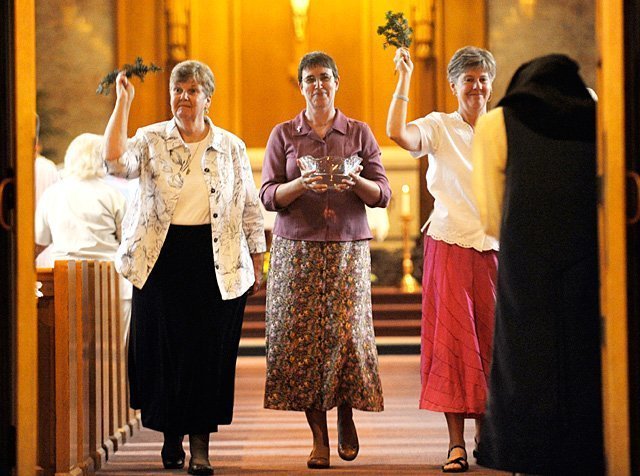 EDITOR’S NOTE: Inspired by Pope Francis’ declaration of the Year of Consecrated Life, this is the sixth installment in a series on religious communities in the Diocese of Rochester.

For nearly 160 years, Sisters of Mercy in the Rochester area have been doing the work of their order’s founder, Sister Catherine McCauley, by serving the poor, the sick and the uneducated.

With encouragement from the archbishop of Dublin, Sister McCauley founded the Sisters of Mercy in her native Ireland in 1831. Four years prior to the order’s establishment, Sister McCauley, who was a Catholic laywoman at the time, had opened the House of Mercy in Dublin to provide shelter and education to women and girls, according to information at sistersofmercy.org.

Throughout their work, the Sisters of Mercy strive to fulfill their foundress’ mission throughout the world, observed Sister Patricia Prinzing, noting Sister McCauley’s mandate: "Where there is a need, I want my sisters to be there to meet that need."

The sisters have carried out that mission in the Diocese of Rochester since arriving here in 1857. The local congregation founded hospitals and schools, including St. James Mercy Hospital in Hornell, Our Lady of Mercy High School in Brighton and Notre Dame High School in Elmira, Sister Prinzing added.

Other ministries operated or sponsored by the Sisters of Mercy include Mercy Community Services — formed by the merger of Mercy Outreach Center and Mercy Residential Services — which serves homeless women and their children; Mercy Bridges, which provides literacy and services for English as a second language; and Rochester’s own House of Mercy, a homeless shelter cofounded three decades ago by Sister Grace Miller.

The model of service exemplified by these Rochester-area Mercy ministries attracted the attention of Sister Laurie Orman, who went on to profess her final vows in the Mercy order nearly five years ago. Having worked for a few years in faith formation and youth ministry at St. Agnes Parish in Avon, she is now following a call to help other women discerning calls to religious life.

"When the invitation came out for sisters to discern vocation work, I really felt that was an area that I had gifts for," said Sister Orman, who recently was named vocations director for the New York, Pennsylvania, Pacific West Community of the Sisters of Mercy, which includes Rochester.

The regional community, which was created in 2008 and is headquartered in Buffalo, comprises Sisters of Mercy communities in Rochester, Buffalo, Pittsburgh, the Philippines and Erie, Pa. Sister Orman is on the regional community’s Buffalo-based leadership team, on which Rochester also is represented by Sister Sheila Stevenson and Sister Prinzing, who is vice president. Sister JoAnne Courneen, former director of the Mercy Institute at Mercyhurst University in Erie, Penn., is president.

Sister Orman also is part of the regional community’s new vocation team for the Northeast. This initiative is focused on reaching out to people and organizations who work with women to determine their needs, added Sister Orman, whose office is located at Mercy Center, the Sisters of Mercy motherhouse in Brighton.

"We are really looking at getting out there in our different areas and finding out where we need to be and what we need to do," she added.

In addition to applying to become a Sister of Mercy, the congregation offers women in discernment the options of becoming Mercy Associates or joining the Mercy Volunteer Corps, Sister Orman explained. An associate lives independently but fulfills Sister McAuley’s mission through spiritual and corporal works of mercy with support from the sisters, according to sistersofmercy.org, while volunteer corps members are men or women who commit to a year of service to the poor while living in a communal lifestyle and undertaking spiritual growth.

The order continues to grow, with novitiates in the Philippines and Rochester, and three novices from Ohio and the Philippines will soon profess their final vows in Buffalo, Sister Prinzing said. Nationally, the Sisters of Mercy number about 3,400 and 9,000 worldwide, she said. Vocation ministers like Sister Orman continue to work in schools and with dioceses throughout the country, the regional vice president noted.

We are alive and well," Sister Prinzing remarked. "We have committed ourselves to a future, and a future that continues Catherine (McCauley)’s mission of being where the needs are."