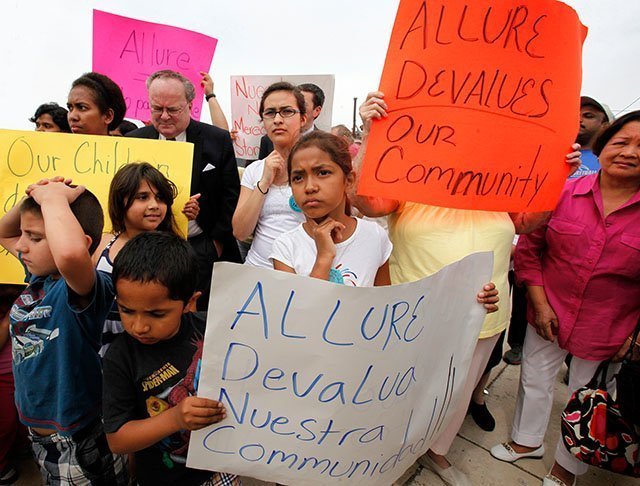 Ana Cala, center, holds a sign protesting the presence of the strip club Allure while attending a June 18 press conference in Stone Park, Ill. Attorneys, residents and community activists, joined the Missionary Sisters of St. Charles Borromeo for a procession to the strip club to protest its proximately to the sisters' convent.

CHICAGO (CNS) — The Missionary Sisters of St. Charles Borromeo are not pleased by having a "gentlemen’s club" operating in their backyard, and they are not going to be quiet about it.

Club Allure, located in Stone Park, backs up to the sisters’ property.

The lawsuit, filed in Cook County Circuit Court by the Thomas More Society, claims that the club violates an Illinois state law requiring a 1,000-foot buffer zone between adult entertainment venues and places of worship and schools, among other uses.

The sisters’ property, which includes the provincial motherhouse, a school for novices and a home for aging sisters, also houses three chapels. Neighbors often join the sisters for prayer and daily Mass.

Thomas Brejcha, Thomas More Society president, said the club is open until 5 a.m. and disturbs not only the sisters, but neighboring families.

The Scalabrinian sisters have been protesting the club since they learned the property had been rezoned more than two years ago. At the time the proposed club was to be called "Get It." Its opening was delayed until September 2013, when it opened under the name Club Allure Chicago.

The sisters said they were never informed of the rezoning hearing. At the time, Stone Park village officials said their letter went to the wrong address because of problems with the property tax records.

What’s more, Brejcha said, the placement of the club on the border of Stone Park and Melrose Park means that it violates Melrose Park’s buffer zones as well.

Scalabrinian Sister Noemia Silva represented her community at a news conference about residents’ concerns June 18. "They can have their strip club, but in their own backyard, not in ours," she said.

"This strip club has created an environment of fear and insecurity," Sister Noemia said. "Club Allure devalues and degrades our communities. A place like this should not be next to our convent and especially should not be in a residential area where children play every day. What mother wants to bring their family up next to a strip club?"

While the lawsuit is pending, the sisters planned to hold weekly Friday evening prayer vigils, meeting in the convent and walking to the front of the strip club to pray.

Martin is a staff writer with the Catholic New World, newspaper of the Chicago Archdiocese.