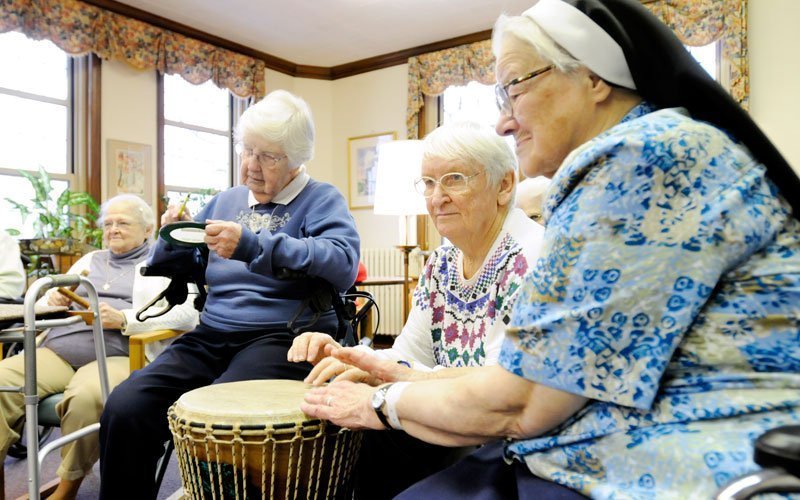 BRIGHTON — The monthly drum circle at the Sisters of Mercy Motherhouse starts early, allowing the sound of drums to reverberate to the floors above and below.

“Why don’t we just play and wake up the others?” Father Peter Abas, motherhouse chaplain and sacramental minister at Henrietta’s Guardian Angels Parish, jokingly suggested to those gathered for the November session.

Father Abas, who began leading the motherhouse’s drum circle several months ago, headed around the room passing out drums, maracas and other percussion instruments big and small to the group of elderly sisters, priests and laypeople.

Once all had instruments, Father Abas suggested they warm up, and he clapped out a beat with his hands. On his cue, participants joined in with taps, booms, bangs and clangs. Father Abas then added a more complex rhythm, and Sister Margaret Caufield, a retired music teacher, created a melody from her perch at the piano.

The din came to a prompt close when Father Abas counted “4-3-2-1,” and then the jokes started.

“We can make a lot of money if we go for a concert,” the priest quipped.

Yet unlike many other musical groups, this drum circle is an end unto itself. Father Abas, who has led several other area drum circles, noted its therapeutic aspects: It helps people relax, gives them energy, and allows them to vent frustrations and express their talents. At the outset, he said, some of the participants seemed weak, but after even one session of drumming, they appeared to be invigorated.

To illustrate this point, during a break in the music Father Abas asked the 80- and 90-year-old participants how they felt.

“I want to get up and dance,” said Sister Mary Carmella Coene, who will turn 100 on Dec. 21. During the circle, she vigorously hit a bass drum as tall as the seat on her wheelchair.

After the drumming session Father Abas pointed out that many of the circle’s participants live in the motherhouse’s dementia unit.

“This is the first time I have done it (a drum circle) in a residence and with some in a state of Alzheimer’s or dementia,” he noted.

To help them get the full benefit of the circle, he gently encouraged participants who were reluctant to pick up an instrument and try drumming. For example, one sister who was wheeled to the circle tried to turn down the offer of a drum.

“Today, you are not making noise, you are producing noise,” Father Abas remarked as he handed her a drum.

Other participants said they are sold on the circle and on Father Abas.

“When you really get going, you can feel the other people take over,” said Father David Doerner, a former missionary to Japan who participated in the circle.

The communal nature of the circle is one reason why Sister Caufield, the piano player, said she pines to be back in its midst.

“One hour of piano playing at my age is difficult,” said Sister Caufield, who taught at Rochester’s St. Andrew and St. John the Evangelist schools.

But if it is difficult, Sister Caufield doesn’t let on. As participants call out the names of songs from the patriotic (“God Bless America”), to the nostalgic (“You are my Sunshine”), to the seasonal (“Santa Claus is Coming to Town”), she pulled the melodies from her memory.

Some sisters joined in singing the songs. Sister Caufield’s biological sister, Sister Ann Caufield, said it’s clear that people find it fun to be a part of the circle.

“By the looks on their faces, everybody seems to enjoy it,” she observed.