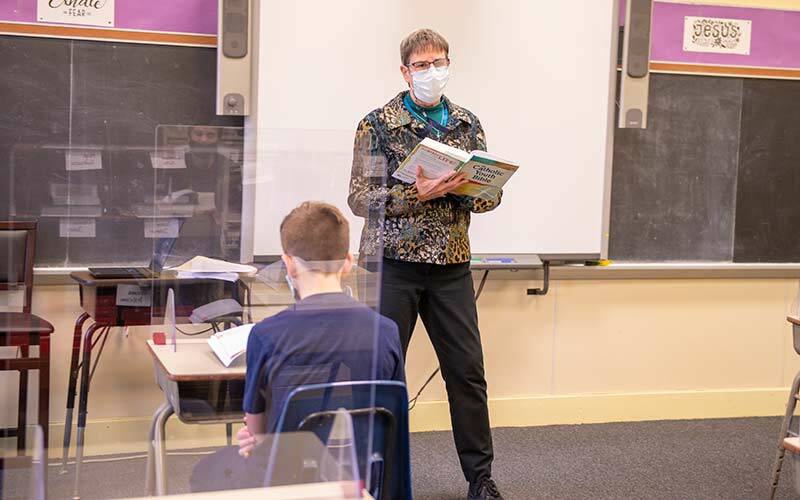 Young nun in Rochester describes her journey to vocation

The first thing she noticed about the nuns at church was their joy. It was pure. It was simple. And it was contagious.

“I thought, ‘I want to be like them,’” Sister Maria Elena Mariani recalled.

At the time Sister Mariani was just a child. Her family was actively involved in Rochester’s Most Precious Blood Parish and frequently pitched in when the Sisters of St. Joseph who served there needed a hand with such tasks as raking leaves or cleaning the church.

“We had fun doing it. I remember them being very happy,” Sister Mariani said of the sisters.

In later years it was the sisters’ kindness and strong faith that stood out to Sister Mariani, who encountered the women religious again when she studied at Holy Rosary School and Nazareth Academy. Her interactions with these women inspired her own vocation, remarked Sister Mariani, who this year will celebrate 60 years as a Sister of St. Joseph.

“They were deeply spiritual women. They were wonderful role models. And in later years when I entered (the congregation), they were wonderful mentors,” said Sister Mariani, communications and development associate for the Sisters of St. Joseph of Rochester.

Sister Mariani’s early role models inspired her vocation by living out their own. These days, women religious remain well aware that their daily interactions with others provide similar opportunities to plant the seeds of future vocations, according to Mercy Sister Laurie Orman.

“We always say that all of us are vocation ministers in one way or another, whether we are formally in vocation work or not,” said Sister Orman, who teaches middle-school religion and social studies at St. Mary School in Canandaigua.

Sister Orman also is an active parishioner at St. Pius Tenth Parish in Chili. Her presence in both the school and parish communities provides informal opportunities to educate people about religious life. While she doesn’t walk around giving lectures about religious life, she also does not hide the fact that she is a Sister of Mercy. Seeing women religious living and working among them lets people know that religious life is alive and well and a vocation they can consider, she said.

“Even though I work with middle-school kids right now, it doesn’t mean that I’m not planting a seed. They’re getting a connection with a sister every day, and who knows where that goes?” she said. “It could be a few years from now and someone could feel called to this life and think, ‘Oh, yeah, I remember when Sister Laurie talked about this,’ or ‘Oh, yeah, Sister Laurie is someone I could talk with.’”

Students sometimes are curious about what it’s like to be Sister of Mercy or to live in community with other women religious. Sister Orman said she welcomes such questions and answers them honestly.

Women religious are not as visible or numerous in parish life as they were several decades ago, which makes it even more important for them to share and answer questions about their vocation, agreed Mercy Sister Sheila Stevenson, pastoral administrator at St. Marianne Cope Parish in Henrietta and Rush.

“It’s important for me to identify myself as a Sister of Mercy, to talk about what my life is like and to kind of show that I’m just your normal, average person, but my call in life has been to the Sisters of Mercy for 50 some-odd years,” Sister Stevenson said. “It’s important that young people see what (women religious) are doing today, that spirituality and prayer is important in your life, and also to see that we’re just regular people following our path.”

The prospect of entering religious life may be intimidating or seem out of reach for some people, especially if the only image they have of women religious is “the mean sisters with the ruler,” Sister Stevenson remarked, noting that she never encountered anyone like that during her years as a student at St. Charles School in Greece. It’s helpful for a woman discerning a potential vocation to have someone she trusts enough to come to with questions, she added.

Recognizing this opportunity, Mercy Sister Mary Veronica Casey tried to provide safe spaces for students who had questions, first at Cardinal Mooney High School in Greece and later at Our Lady of Mercy High School in Brighton. Sister Casey, who this year celebrates 70 years as a Sister of Mercy, said she always let students initiate conversations and never tried to pressure them into considering religious vocations. Instead, she said she made sure to provide honest information to anyone who asked as a way of helping them along on their vocational journey.

She said one new way the congregation has been doing this is through online retreats. During the months when the pandemic was at its peak and in-person gatherings were prohibited, the sisters were able to expand their retreat offerings as well as their reach, thanks to such online video-conferencing platforms as Zoom, Sister Del Santo said.

Sister Del Santo has long traveled to Ithaca to lead a Busy Person’s Retreat at Cornell University in Ithaca, but thanks to Zoom, she now is able to offer the retreat to students on campuses outside of the Diocese of Rochester, including St. Bonaventure University in Olean and Canisius College in Buffalo.

Some offerings, including an online series on St. Joseph, drew participants from all over the United States, as well as from Canada and Indonesia. These programs provide new ways for Sister Del Santo to form meaningful connections with young women who may one day return to her with questions about religious life.

Forming such connections also helps women religious hear the voices of young women and understand what they are seeking. Pope Francis acknowledged the importance of this type of listening in 2018, when he convened the Synod on Young People, the Faith and Vocational Discernment, Sister Del Santo said.

“We need to be a listening church. We need to recognize the gift of youth to church in the world, recognize the mystery of each person’s vocation, mentor youth in the art of discernment and walk together in daily life,” she said.