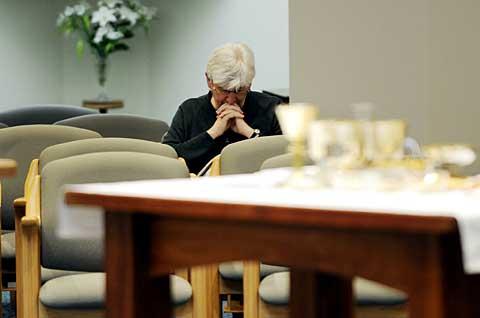 PITTSFORD — It’s been years since Auburn native Sister Louise Dolan visited her home city, but the people of Auburn are never far from her mind. In fact, the Sister of St. Joseph, who now resides at her congregation’s motherhouse in Pittsford, prays for the people of Auburn’s St. Mary Parish every single day.

Sister Dolan’s prayers for St. Mary parishioners are part of the Sisters of St. Joseph’s Prayer Ministry, through which the sisters pray for parishes, ministries and individuals who request prayers. This ministry has been around for many years, noted Sister Rita Jongen, who as the ministry’s coordinator is responsible for matching up sisters with prayer requests.

The Prayer Ministry provides an ideal way for elderly or infirm sisters who have retired from active ministry to still be involved in some form of ministry, she added.

"There’s no retirement," Sister Jongen said of being a woman religious. "There’s retirement from active ministry, but not from religious life."

When the parish component of the Prayer Ministry started years ago, sisters would ask to pray for parishes they had served, their home parishes or other parishes to which they had personal connections. The pairings changed as sisters passed away and parishes closed or merged with others, Sister Jongen said, and eventually sisters began to be assigned to specific parishes.

"As a child my mother very often took us up to church to St. Mary’s and we always kind of enjoyed it," Sister Dolan recalled. "It wasn’t very different from St. Aloysius."

When Sister Dolan learned in December that she’d been reassigned to pray for St. Mary for another year, she promptly sent a note to the parish expressing her joy about the assignment. The parish printed her note in its Jan. 3 bulletin.

Sister Chris Treichel, OSF, pastoral administrator of Sacred Heart Parish in Auburn and St. Ann Parish in Owasco, also mentioned the Prayer Ministry in her Jan. 3 bulletin column. She’d just found out that Sister Concepta Vay had been reassigned to pray for the Auburn and Owasco parishes, she wrote.

"It’s comforting to know that our faith communities are held in prayer," Sister Treichel wrote. "And the best yet … she taught here so she has a connection with us. I usually send her flowers mid-year as a thank you."

Sister Vay told the Catholic Courier she taught at the former Sacred Heart School from 1960-70.

She was young at the time and it was the first time she’d been assigned to a post outside of Rochester, she recalled. Her family was nervous, but their fears were eased when they learned the pastor she’d be working with was Father Raymond Wahl, a priest they’d known for years. Sister Vay soon grew close to the families she served and kept in touch with parishioners even after she’d been reassigned. She said she was excited when, some years ago, she was asked if there was a particular parish she’d like to partner with for the Prayer Ministry.

"I responded immediately and said, ‘Yes, there’s a very special parish that I love, and I would love to be able to be their prayer partner,’" Sister Vay said. "Because of my love of the people of Auburn and their families, I still pray every single day for the people in the parish. They are very special to me."

Sister Claire Francis Mogenhan, meanwhile, has never served at Holy Trinity Parish in Webster, which she prays for through the Prayer Ministry. She receives the parish bulletin each week via e-mail, however, and strives to keep in touch with those she’s praying for. She also prays for her congregation’s missions in rural Alabama and in Brazil, and for anyone else who contacts her with prayer requests.

"We pray for anyone who might need prayers, no matter where they are in the world. We’re connected with the world through prayer," Sister Mogenhan said.

Sister Jongen agreed, noting that she also feels connected to others when she prays for her assigned parish, St. Patrick in Victor, and for other prayer requests.

"It makes me feel like I’m on a journey with all God’s people and we help each other along the way. I need the prayers of others the same way they need my prayers," Sister Jongen said.

"I think there’s not a minute of this day there’s not somebody praying," Sister Mogenhan added.