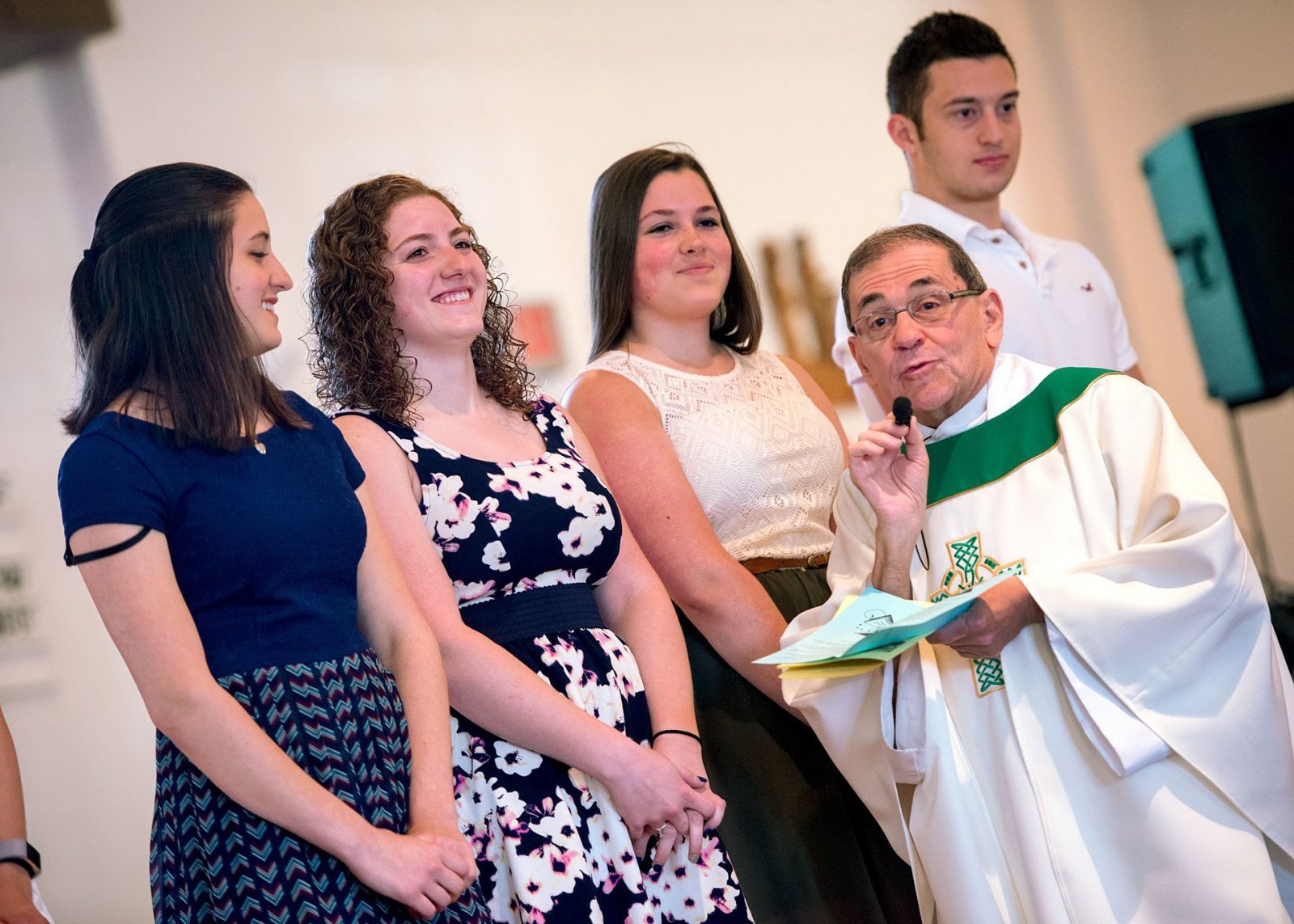 Tyler Dellina (back) and sisters Brittany (from left), Rachel and Nicole Ellison are recognized by Father Stephen Kraus during a June 11 Mass at St. Theodore Church in Gates that honored 2017 high-school graduates. The Ellison triplets say they are prepared to continue their faith lives at college.

GATES — Ever since they were born a mere minute apart on Feb. 3, 1999, Rachel, Nicole and Brittany Ellison have been inextricably linked. In fact, they’ve done so much together at church and school that they say they’re often regarded as a collective unit rather than three distinct young women.

Although the 18-year-olds are generally good-natured about their rare status as triplets — according to the National Vital Statistics Report, the birth rate for triplets or a higher number is about one per 1,000 live births — they also are eager to establish separate identities.

“We’d like to be recognized as individuals, not as a club,” Brittany quipped, drawing laughter from her sisters.

With college right around the corner, the three children of Lisa and Michael Ellison will have ample opportunity to develop their individuality. Rachel will soon begin at the University of Buffalo to study accounting; Nicole will attend SUNY Albany for human biology; and Brittany will become a SUNY Geneseo student pursuing a career in business.

Among the many lifestyle adjustments in college will be how Rachel, Nicole and Brittany live out the Catholic faith that has been a big part of their lives. From the time they were infants, they have regularly attended Mass together at St. Theodore Church with their parents. However, once the school year begins, the responsibility for meeting their Sunday obligation will rest squarely on their shoulders.

“It’s kind of like, it’s your turn to take a step forward,” Rachel remarked, saying the time has arrived for her and her sisters to take full ownership of their faith.

She and her sisters said they’re adamant about taking that step. The recent Spencerport High School graduates said they’ve already researched their respective campus ministries — and, according to Nicole, they plan to attend Mass “as frequently as we can.”

“It’s something we just do. Going to college, it shouldn’t be any different,” Nicole said.

On the other hand, she and her sisters acknowledged that their faith lives must contend with such potential distractions as academic demands and social diversions.

“It won’t be an easy adjustment,” Brittany acknowledged, while Nicole views her collegiate environment as “a test to see how true you are to your faith.”

Nicole said she’ll make it a point to attend Mass the first week of school so she can get right into a routine. She said the potential pressures of college should not get in the way of Mass attendance but serve as “all the more reason” to have Catholic campus ministry as a spiritual base.

Although they won’t be attending Mass on campus with family members, Brittany said she plans to ask other students to join her. Meanwhile, Rachel plans to take advantage of offerings through campus ministry that might include liturgical involvement, faith-sharing sessions, social events, service projects, retreats, mission trips and leadership roles.

“It’s a great opportunity to get involved, especially being new to the campus,” Rachel said.

Involvement has long been a trademark of the Ellison sisters during their time at St. Theodore. They’ve regularly taken part in youth-ministry activities and have all taught vacation Bible school. Rachel and Nicole have been extraordinary minister of holy Communion; Rachel is a former altar server; Nicole has belonged to the parish pastoral council; and Brittany has been on the parish youth committee. All three earned Hands of Christ awards, which are given to high-school seniors who exhibit outstanding service. Nicole, in fact, was selected to give a witness talk at a diocesan Hands of Christ ceremony in February 2017.

Although they’re about to go their own ways, the Ellison triplets plan to keep in close touch by phoning and messaging, helping each other adjust to their new worship settings as well as all other aspects of college.

“Having each other, we’re able to talk it through,” Nicole said.