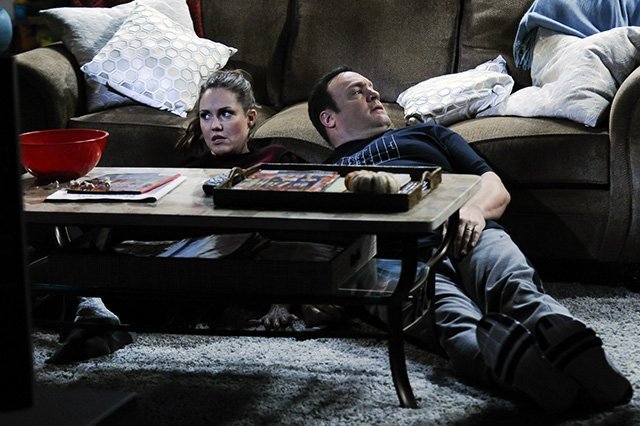 Erinn Hayes and Kevin James are seen in the CBS comedy "Kevin Can Wait."
NEW YORK (CNS) — Nearly a decade after his popular series “The King of Queens” ended, comic Kevin James is back on CBS.
He plays recently retired New York City policeman Kevin Gable in the sporadically funny sitcom “Kevin Can Wait.” The show, which premiered Sept. 19, airs Mondays, 8-8:30 p.m. EST.
Fictional Kevin lives in Massapequa, Long Island, with his wife, Donna (Erinn Hayes), his younger daughter, Sara (Mary-Charles Jones), and son, Jack (James DiGiacomo). In the pilot episode, Kevin’s oldest child, Kendra (Taylor Spreitler), returned home and announced that she was quitting school to support her English fiance, Chale (Ryan Cartwright). Chale is supposedly developing the next big app.
This news upsets Kevin’s cherished plan to augment his pension by renting out his garage. Instead, he lets Chale occupy the space while Kendra bunked with Sara.
Kevin, who — like James — is Catholic, won’t let the couple live together. He also encourages Kendra to go back to college while working part-time at the local diner. James’ Catholicism appears in subtler ways as well: a cross, for instance, adorns the kitchen wall. Yet, as Donna shrewdly acknowledges, his time at Mass is the only hour each week Kevin really tries to be good.
“Saturday Night Live” alumnus Jim Breuer stands out in one episode as Kevin’s parish priest, Father Philip. Caught in a lie that involved taking credit for the heroic actions of his former partner, Tyrone “Goody” Goodman (Leonard Earl Howze), Kevin visits Father Phillip in the confessional, and explains his intention to set things straight. Father Philip promptly reminds him that the road to a certain undesirable destination is paved with such intentions.
The fundamental problem with “Kevin Can Wait” is that its genuinely funny moments are too widely spread apart. Despite some nods toward James’ Catholicism, moreover, the program — which includes occasionally vulgar dialogue — doesn’t portray him as a lovable but flawed Catholic family man, one who at least puts his wife and kids first.
Rather, Kevin views his retirement as his golden chance to waste time, driving go-carts and drinking beer in the middle of the day with his fellow ex-cops. As a result, his character comes across as frivolous at best and, at worst, downright irresponsible.
Nor is the depiction of his marriage especially positive. Thus, in one episode, Kevin endures dinner at a Moroccan restaurant and the new Gloria Estefan Broadway show strictly as a stratagem for inducing Donna to have sex with him.
As for setting up the overly sensitive, nerdy, comically accented Chale as Kevin’s foil, it’s a lazy conceit which only serves to underscore the show’s tiresome celebration of the American male’s stalled adolescence.
James also lacks backup here. There isn’t a single character on “Kevin Can Wait” to compare to the great Jerry Stiller as James’ eccentric father-in-law, Arthur Spooner, on “The King of Queens.” Instead, the decibels rising on the laugh track only remind viewers just how much the show is straining to make them laugh. And James’ frequent references to his “stretchy pants” don’t help.
Having followed the popular program “The Big Bang Theory” for its first five weeks, “Kevin Can Wait” recently moved to the time slot “Big Bang” had previously occupied. In the era of binge watching, scheduling doesn’t matter as much as it once did. Yet, having an established hit as its lead-in may account, at least in part, for the fact that CBS is able to bill “Kevin Can Wait” as America’s number one new comedy.
– – –
Byrd is a guest reviewer for Catholic News Service.
Copyright © 2022 Catholic News Service, Inc. All rights reserved. Linking is encouraged, but republishing or redistributing, including by framing or similar means, without the publisher's prior written permission is prohibited.