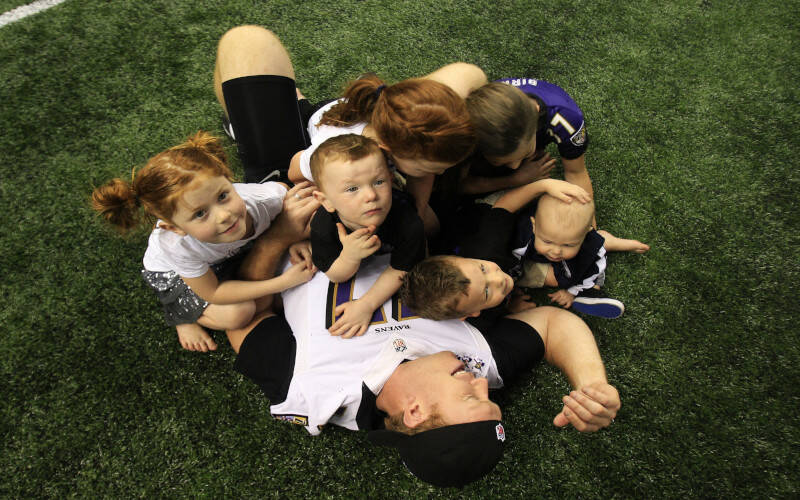 Baltimore Ravens Matt Birk plays with his children during a practice at the Superdome ahead of the NFL’s Super Bowl XLVII in New Orleans Feb. 2, 2013. (CNS photo by Sean Gardner/Reuters)

That’s when the former center with the Minnesota Vikings and Baltimore Ravens instinctively knew life is a gift from God.

The six-time National Football League Pro Bowler and two-time All Pro didn’t really put his pro-life values into action, however, until Baltimore Archbishop William E. Lori unexpectedly called him in 2011 with an invitation to speak at the Maryland March for Life.

Participating in the Annapolis march set Birk on a new path of very public pro-life activism.

“It’s not hyperbole to say that that night changed my life,” Birk said, noting that he was moved by the testimony of women who told him they regretted having abortions.

“That was just something really profound,” said Birk, a Harvard graduate who spent the last four years of his 15-year NFL career with the Ravens. “It really hit me. I was thinking, ‘My gosh, these women, they’ve been through it all and they want to tell everybody that abortion is wrong and that it’s a bunch of lies and the pain lasts.’”

Birk and his wife, Adrianna, are the parents of eight children, including two sons they adopted as infants just a few months apart. Adrianna has long been active in the pro-life movement. She previously volunteered at a pro-life pregnancy center in St. Paul opened by the godfather of one of the couple’s children and located across the street from a Planned Parenthood facility.

In traveling around the country, Birk hears that same story again and again — a sign, he said, that “light always triumphs darkness.”

“It’s a beautiful thing and just proof that God wins in the end,” he said. “All we need to do is just keep being his faithful servants and doing individually what he’s asking each of us to do in this battle.”

Not long after helping the Ravens win the Super Bowl in February 2013, Birk announced his retirement on the same day he visited St. Mark School in suburban Catonsville, Maryland, to encourage students to live out their faith. Father Christopher Whatley, who had served as the Ravens’ Catholic chaplain, was the pastor of the parish at the time.

That same year, Birk stirred national controversy when he declined an invitation to visit President Barack Obama with his Super Bowl champion teammates at the White House. Birk was disturbed that the president seemed to ask God to “bless” Planned Parenthood during an April 26, 2013, speech at the organization’s conference in Washington.

It’s not enough simply to say one is pro-life, Birk insists, saying one must “do” pro-life.

As an example, he has highlighted the pro-life outreach of the Knights of Columbus, of which he is a member, noting that the fraternal organization has donated more than 1,000 ultrasound machines to pregnancy resource centers across the country. Such contributions, he said, help women see their unborn children in the womb and make a decision for life.

Birk, 45, credited his years with the Ravens with helping him mature in his faith. The reason he came to Baltimore was to be coached by John Harbaugh, a fellow Catholic, who counseled players not only on football, but on bigger life questions.

“The locker room is actually a very spiritual place,” Birk said, explaining that three of the four head coaches he played for in the NFL were Catholic and that he always attended Mass in the hotel on game day. “It’s really one of the few workplaces in America where you’re actually encouraged to grow in your walk,” he said.

Birk said half of all players had Bibles in their lockers and went to Scripture studies.

“I think at least in our hearts, we all know that nothing in the NFL is really true,” he said.

“The money and the fame and the attention and all that, we know it’s not true. And our hearts long for truth. And so the NFL environment is really conducive to guys asking the most important questions and seeking out the truth.”