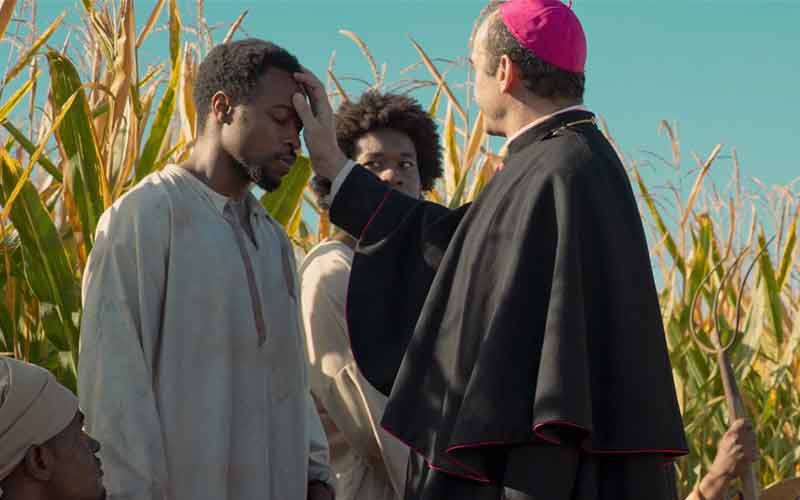 A scene from the movie "Slaves and Kings." (Photo by Bosco)

NEW YORK – The social strife that roiled Spain, both during the 19th century and in the lead-up to that nation’s tragic 1936-39 civil war, serves as the background for the biography “Slaves and Kings” (Bosco). This chronicle of the varied life of St. Anthony Mary Claret (Antonio Reyes) is framed by research about him carried out in the Depression era, 60 years after his 1870 death at age 62.

The investigation is the work of left-wing author and journalist José Martínez Ruiz, who wrote under the pen name Azorín (Carlos Cañas). He’s reevaluating the calumnies advanced against Claret, during his lifetime, by his powerful enemies.

To achieve a balanced assessment, however, Azorín will have to overcome not only his anticlerical inclinations but the disapproval of his literary peers. (In fact, Azorín seems to have veered between liberalism and conservatism over the course of his career, eventually conforming – at least outwardly – to the Franco regime, though there’s little indication of this on screen.)

Through the lens of Azorín’s inquiry, we’re shown the multifarious roles Claret took on following his ordination to the priesthood.

Always a dedicated evangelist, he was also, by turns: founder of the Missionary Sons of the Immaculate Heart of Mary, better known as the Claretians; archbishop of Santiago, Cuba; and confessor to Queen Isabella II (Alba Recondo). His tenure in the latter office, as depicted here, was a challenging one.

Informative but stiff, director Pablo Moreno’s portrait highlights its subject’s opposition to slavery, his freedom from material concerns and his desire to steer clear of his homeland’s tempestuous politics. It’s an edifying retrospective. Yet the film is marred by awkward dialogue, the unnaturalness of which is, perhaps, exaggerated by the decision to dub the film into English rather than use subtitles.

Still, Claret’s many achievements shine through these aesthetic blemishes. In an age when positive priest figures are a rarity at the movies, Catholic viewers will welcome this exception to the rule.

“Slaves and Kings” is being released by Fathom Events and will be screened Monday, Aug. 22, in English and Tuesday, Aug. 23, in Spanish. For theater information, go to: www.fathomevents.com/categories/inspirational.

Look for: A reverent tone and inspirational content. Look out for: Brief violence with slight gore, the aftermath of battle and of a lynching, mature themes, including adultery and illegitimacy, a couple of mild oaths and a single crass term. The Catholic Moviegoer’s guidance is T – suitable for mature teens. Not rated by the Motion Picture Association.

Editor’s Note: The movie will be screened in English Aug. 22 at these following theaters in the Diocese of Rochester: