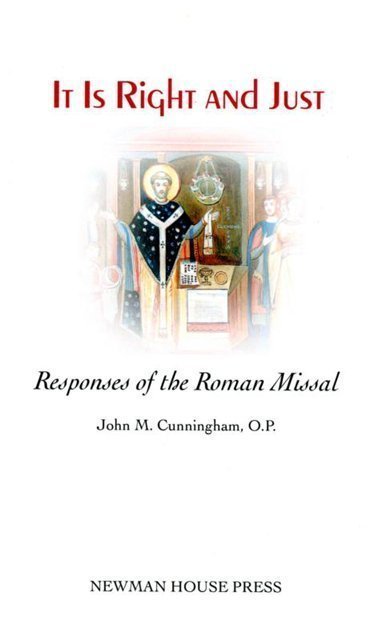 This is the cover of "It Is Right and Just: Responses of the Roman Missal" by John M. Cunningham, OP. The book is reviewed by Mitch Finley.
"It Is Right and Just: Responses of the Roman Missal" by John M. Cunningham, OP. Newman House Press (Pine Beach, New Jersey, 2016), 61 pp., $10.
Any Catholic who attends Mass regularly is by now familiar with the new English translation of the Mass prayers published in 2011. This doesn’t mean, however, that familiarity led to understanding or appreciation.
Many Catholics may not grasp the connections between the responses now spoken by the eucharistic assembly and both Scripture and the writings of the early fathers of the church. In "It Is Right and Just," Father John Cunningham, an Irish Dominican and lecturer at the Pontifical University of St. Thomas Aquinas in Rome, takes up each response and discusses its biblical and patristic roots.
Dividing his discussion according to the parts of the Mass — introductory rites, liturgy of the word, liturgy of the Eucharist, Communion rite, and blessing and dismissal — Father Cunningham addresses each response spoken by the assembly and shares insights with the reader. One commentary many readers may be particularly interested in is the one on the response, "And with your spirit." Why did this response replace the one that had become so familiar, "And also with you." Father Cunningham writes, in part:
"Understanding the response ‘And with your spirit’ in the light of … words of the fathers of the church (e.g. St. John Chrysostom and Theodore of Mopsuestia) should draw attention to the sacred ministry of priesthood rather than to the personality of any individual priest. It should also liberate the celebrant from the imagined need to attach a ‘secular greeting’ to the ‘sacred greeting’ as if the latter were an obstruction to communication between priest and people."
Father Cunningham draws on not only the writings of the early fathers of the church but also on the documents of the Second Vatican Council and on the Catechism of the Catholic Church.
Commenting on the suggestion that the penitential act in the Mass is the same as the sacrament of penance, for example, he quotes from the catechism, "The Eucharist is not ordered to the forgiveness of mortal sins — that is ordered to the sacrament of reconciliation." This is also an example of the author’s tendency to let his source speak for itself without comment. For example, note that the catechism says nothing about the forgiveness of venial sins in the penitential act, only mortal sins. (The reader would do well, by the way, to note that the catechism makes clear the rarity of mortal sins and how difficult it actually is to commit a mortal sin.)
When commenting on longer responses, such as the "Glory to God in the Highest," Father Cunningham singles out particular parts for attention. He notes that "the Gloria may be conveniently divided into three sections: the song of the angels (Lk 2:14), the praise of God and the invocation of the Lord Jesus Christ."
He then comments on each of these three parts, and sometimes his remarks on even a single word will enrich the reader’s appreciation for that one word in the context of the entire response. Regarding, for example, the Gloria’s invocation of peace, he quotes from "The City of God" by St. Augustine of
Hippo: "So great is the gift of peace that … nothing more pleasant can be heard, nothing more desirable can be longed for, and nothing better can be found."
After reading this, speaking the single word "peace" when reciting the Gloria during Mass may become a more meaningful experience.
There are numerous similar commentaries in this slim volume that readers, both laity and clergy, will find enrich their experience of the Mass and, in particular, their speaking of the responses given by the Roman Missal to the eucharistic assembly. Not only will individual readers gain much from "It Is
Right and Just," but it lends itself well to use by parish reading and study groups. This is a superior book that comes with this reviewer’s highest recommendation.
– – –
Finley is the author of more than 30 books on Catholic themes, including "What Faith is Not" (Sheed &amp; Ward) and a best-seller, "The Rosary Handbook: A Guide for Newcomers, Old-Timers and Those In Between" (Word Among Us Press).
Copyright © 2023 Rochester Catholic Press Association, Inc. All rights reserved. Linking is encouraged, but republishing or redistributing, including by framing or similar means, without the publisher's prior written permission is prohibited.