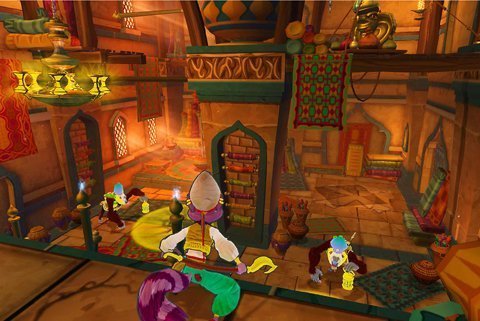 Populated by an array of anthropomorphized creatures, and hinging on a premise about time travel, the game offers a multitude of playable characters with different abilities as well as a rainbow of open historical environments ranging from feudal Japan to the Wild West.

At the heart of it all stands franchise protagonist Sly Cooper — a renowned but now retired thief. Sly has inherited his larcenous ways, as well as the clever strategies he employs while purloining, from his ancestors. So when Sly discovers that his arch-nemesis — a French skunk known as Le Paradox — has mastered time travel and is systematically wiping out his family history, it’s time to swing into action.

To stop the evil shenanigans and save Sly’s progenitors, he and his best pals — a turtle called Bentley and a hippo named Murray — must follow their adversary into the past. Joining them is fetching raccoon detective Penelope. Although her calling might seem to preclude it, Penelope has, in fact, been Sly’s on-again, off-again girlfriend throughout the series.

Gameplay consists primarily of stealth-based action as Sly reconnoiters targets, dodges enemies and locates lost familial treasures. Variety is provided through Bentley’s computer hacking, ungainly, unsubtle Murray’s brawling and the appearance on the scene of some of Sly’s colorful forbearers.

Though the sum of all these ingredients is surprisingly substantive, this is by no means a perfect title. Outdated mechanics, such as tedious boss battles where tasks need to be repeated in threes, may grate on mature players’ nerves. And the corny jokes encountered along Sly’s path may have them rolling their eyes as well. Yet younger gamers are likely to be more forgiving.

Should parents be concerned that their children are playing a game that endorses — or at least winks at — theft? That potential difficulty is mostly laid to rest by two factors.

The first is the utterly unrealistic fantasy setting found here, one which bears little resemblance to anything concrete. The second is the fact that Sly and his cohorts are primarily focused on reclaiming what Le Paradox himself has stolen. They are not engaged in depriving innocent victims of their rightful property, nor are they motivated by greed.

Light fingers aside, the only other possible snag for general endorsement is a scene in which the belly-dancing gyrations of a female character are used to distract a group of burly guards. But the dancer in question is yet another raccoon and her movements are more on the order of an old "I Dream of Jeannie" episode than anything that might have been spotted during leisure time on "The Sopranos."

The game contains frequent but mild cartoon violence. The Catholic News Service classification is A-I — general patronage. The Entertainment Software Rating board rating is E10+ — everyone 10 and older.