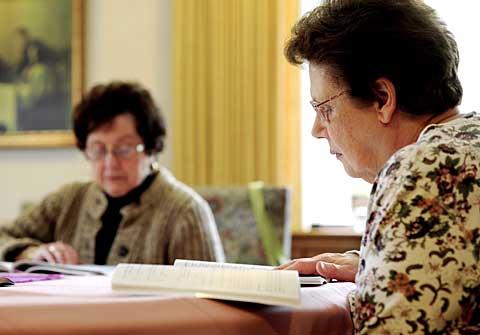 Call it a sneak preview of the Sunday readings.

After sharing baked goods and coffee following the 9 a.m. Mass on Tuesdays at Good Shepherd Catholic Community’s Moravia worship site, some parishioners stick around for a small Christian community.

During this gathering, they reflect on the readings and discussion questions and examine ways to put these Scripture passages into action.

"One conclusion that has come up any number of times is that it’s more important what we do than what we say," said small Christian community regular Bob Hazelton, a resident of Sempronius, Cayuga County. "Our actions speak louder than words."

During Lent, small Christian communities typically of up to a dozen members have popped up all over the diocese — either in parish buildings or in members’ homes. Also during this season membership may swell in other groups that have been meeting regularly for a long time.

Some parishes working to create a sense of unity say they are now turning to small Christian communities to help their members interact.

Mercy Sister Marlene Vigna, pastoral associate of Rochester’s Peace of Christ Parish, said the parish began expanding its small Christian communities groups this Lent as a way to help increase people’s connections with the parish, which formed from three churches: St. Ambrose and St. John the Evangelist in Rochester and St. James in Irondequoit.

She said invitations were sent out to single parishioners between the ages of 30 and 70 — who were identified by a recent parish census as a potentially underserved population — to help connect them with an existing or new small Christian community. Priests have also talked about the communities in homilies and in the parish bulletin.

The advertising has paid off, Sister Vigna said.

"We’ve got seven brand-new small Christian communities," she said, noting that the hope is community participants will continue to gather after Easter.

Sister Vigna said unlike a Bible study, which may have a scholarly focus, small Christian communities ask participants to examine what the Scriptures are saying to them as individuals and as a group. Collectively, participants then decide on a way to apply that message. For example, the group may dedicate time to prayer, gather items for a local charity, fast from electronic media or study a humanitarian relief agency.

A small Christian community at Peace of Christ Parish that meets on Tuesday mornings is collecting cake mixes, frosting and party supplies to create birthday kits for St. Andrew’s food cupboard, said Pastoral Minister Laurie Maier, the group’s facilitator. The idea for the kits came from a suggestion in the book the group uses to guide discussion.

"The birthday kit has really appealed to the parish," Maier said. "We’ve promoted it as a nice family activity for Lent."

Maier’s group also sings monthly at a Mass at Blossom Road Nursing home and has visited a mosque, temple and area charities. As participants have helped each other weather illnesses, deaths and other tough times, the group has become like an extended family.

"We’re trying to put our faith in action and in doing so, we’ve grown closer together," Maier said.

Peace of Christ parishioner Eileen Aman said the small Christian community she attends has helped her change how she participates in church.

That’s a sentiment echoed by Terry Madonna, a participant in a small Christian community at St. Joseph in Penfield.

"I was just an observer at church," Madonna said. "I have been in (a small Christian community) for almost six years and I have certainly become a participant."

Madonna now helps to organize the materials for the parish’s small Christian communities, and she helps to advertise large programs open to all community participants.

One small group at St. Joseph collects paper goods for sister parish Our Lady of the Americas in Rochester. Another sells homemade greeting cards and other items for Bethany House, a Catholic worker home in Rochester for homeless women and children. One group provides a meal each month for the homeless shelter Dmitri House.

"It is a great evangelization tool," she said.