Smoke but no fire on bus during papal visit - Catholic Courier 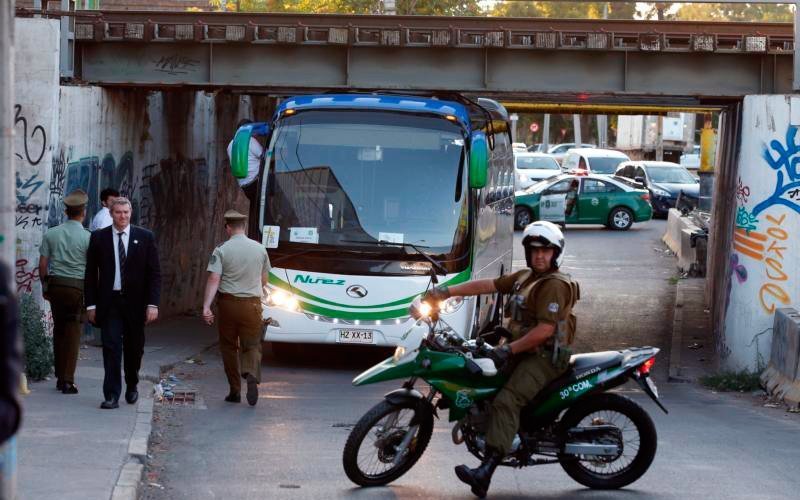 Matteo Bruni, chief press handler for the Vatican, walks away from a bus carrying journalists covering Pope Francis' visit after an accident in Santiago, Chile, Jan. 16. The bus hit the 9.5 foot-tall bridge, ripping off air conditioners on the roof and spilling refrigerant under high pressure into the cabin. (CNS photo by Paul Haring)

SANTIAGO, Chile (CNS) — Where there is smoke, there is normally fire — but not always.

As a large tour bus carrying dozens of journalists passed under a bridge that was too low, the sound of breaking metal and crunching plastic filled the air. The slow-moving bus stopped. Then it went forward again, and more of the same terrible sounds were heard from the roof of the bus.

Most of the journalists, photographers and TV crews working on the bus were so tired after covering six events that they didn’t react immediately.

Then came the smoke, which quickly began to fill the bus. “Open the door,” shouted Salvatore Scolozzi, press handler with the Vatican Press Office. Within seconds, everyone had evacuated the bus.

Journalists witnessed police carrying off the road large pieces of debris that previously were part of the roof of the bus. The large air conditioners on top of the bus had apparently been torn off by the impact, but nothing had fallen inside the bus.

I was in the front section of the bus. When I saw the smoke, I thought there was a fire and left all my photographic gear on the bus as I evacuated. Soon after everyone got off it became clear that the bus was not on fire. The smoke was actually refrigerant spilling out under high pressure from the ripped-off air conditioners.

Although there was extensive damage to roof of the bus, no one on board was injured. The mood outside the bus was lighthearted, as journalists realized that everyone was OK and that we had a great story to tell. We then walked a few blocks and were picked up by another bus.

Surely it couldn’t happen again. But it did. As the journalists’ bus was leaving the site of the final Mass of the trip in Lima, Peru, Jan. 21, it hit an overhead sign that had been put in place just for the Mass. This time damage was light, and there was no need to evacuate. The bus moved on, and we laughed it off as just another bit of craziness on a demanding papal trip.