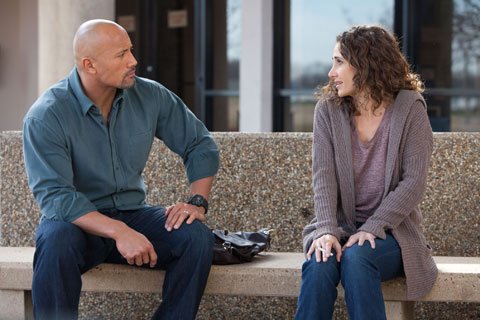 NEW YORK (CNS) — How should society balance the government’s need to combat drug use — and its attendant evils — against the right of a citizen to be judged and punished according to the individual circumstances of his or her case?

If the fact-based film "Snitch" (Summit) is any evidence, the current use of mandatory sentences as a weapon in narcotics cases has those two competing interests thoroughly off-kilter.

Director and co-writer (with Justin Haythe) Ric Roman Waugh invites us to sympathize with the fate of naive suburban teen Jason Collins (Rafi Gavron). After he foolishly agrees to accept delivery of a shipment of illegal pills on behalf of a friend, Jason is promptly busted and faces a compulsory 10 years behind bars.

The only path to a lesser doom is to testify successfully against others, something Jason’s so-called pal is already doing to him. But, since Jason has no real involvement in the world of drugs, he can only obtain mercy by entrapping people. Despite encouragement from his lawyer to pursue this option, with admirable fortitude, Jason refuses.

Jason’s divorced and estranged father, John (Dwayne Johnson), however, is not ready to give in so easily. Guilt-ridden over his neglect of the lad, John struggles to come up with a solution to Jason’s dilemma.

John has already been given an introduction to Malik by one of the employees of his successful trucking business, ex-con Daniel James (Jon Bernthal).

Daniel’s situation is almost as poignant as Jason’s: Despite his past, he’s a dedicated husband and father determined to make a fresh start through honest work. But, with Jason’s prospects worsening rapidly — he’s repeatedly beaten by his tougher fellow inmates — John successfully wears Daniel down, convincing him to revisit his former life long enough to make the connection with Malik.

John then uses his fleet of vehicles as a lure, pointing out to Malik the advantages they would offer in transporting large cargoes of illicit goods.

Waugh enhances the action that follows with continued human drama and social commentary. The latter element gives rise to some clunky dialogue, especially from Joanne. Yet the overall result is both suspenseful and morally rich.

The damaging effects of divorce, the ethical and physical courage displayed, respectively, by Jason and John, the moving spirit of reconciliation and mutual forgiveness between father and son — all add heft to what might otherwise have been an easily dismissed series of shootouts and car chases.

The film contains much stylized and some graphic violence, including gunplay and a beating, mature themes, about a half-dozen uses of profanity and considerable crude and crass language. The Catholic News Service classification is A-III — adults. The Motion Picture Association of America rating is PG-13 — parents strongly cautioned. Some material may be inappropriate for children under 13.