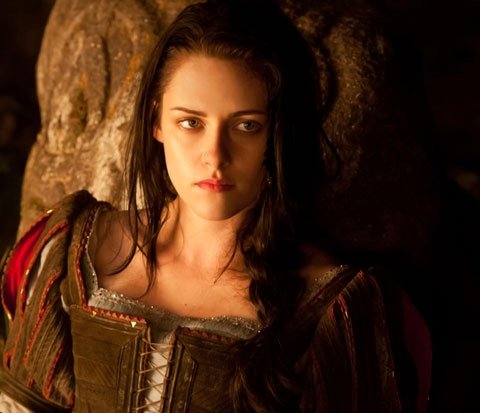 NEW YORK (CNS) — The "Fairest One of All" morphs into a butt-kicking warrior princess in "Snow White and the Huntsman" (Universal), the latest and darkest take yet on the Brothers Grimm fairy tale first published 200 years ago.

In a sharp contrast to spring’s campy comedy "Mirror Mirror," first-time director Rupert Sanders colors the classic good-vs.-evil fable with splashes of gothic horror and extreme violence, which make this rather grim (no pun intended) film unsuitable for young children. The battle scenes in this action-adventure would not look out of place in the "Lord of the Rings" trilogy — nor would the religious imagery, unusual for a Hollywood blockbuster.

This time around, instead of Julia Roberts we have Charlize Theron who chews up the scenery as the wicked Queen Ravenna. A master of sorcery who commands a phantom army, she seduces and marries King Magnus (Noah Huntley), then slays him and takes his throne, forcing his happy kingdom into painful submission.

"When one stays beautiful forever, the world is hers," the Queen screams (she screams a lot). To preserve her loveliness — and power — she relies on a series of gruesome beauty treatments, including a milk bath (enough to make one lactose-intolerant) and a diet of dead birds and sweet maidens, who literally have the life sucked out of them.

It’s only a matter of time before that Magic Mirror warns the Queen of someone fairer, her stepdaughter Snow White (Kristen Stewart of "Twilight" fame), imprisoned in the tower.

"Her innocence and purity will destroy you," the Mirror promises. To ensure her immortality, the Queen must kill Snow White and consume her heart.

Not so fast. Snow White fervently prays the Our Father as she awaits her chance to escape. It comes, and with the help of a conveniently appearing white horse, she flees to the forest.

"After her!" the Queen commands the big lug of a Huntsman, Eric (Chris Hemsworth, aka "Thor"). He complies, only to later take pity on the fugitive and spare her life.

It is here that the screenplay, by Evan Daugherty, John Lee Hancock ("The Blind Side") and Hossein Amini ("Drive") veers even further away from the traditional fairy tale. The erstwhile assassin joins forces with the princess and skills her in swordplay and the art of war. Then the dynamic duo sets off in search of an army to vanquish the Queen and reclaim the kingdom.

Along the way, they run into the dwarfs, all eight of them (another change), headed by Beith (Ian McShane). Intriguingly, they are played by men who are not vertically challenged in real life, but transformed by movie magic. They live in the Sanctuary, an enchanted part of the forest filled with fairies and magical creatures.

Skilled as gold miners, the dwarfs possess a special gift: They can see light in the darkness. In Snow White they see light, a kind of messiah, a point confirmed by the appearance of the White Hart, an albino stag that kneels before her and offers his "blessing."

"She’s the one," says Muir (Bob Hoskins), the blind spiritual leader of the dwarfs. "She will heal her kind."

As Snow White dons her shiny armor and finds her inner Joan of Arc, "Snow White and the Huntsman" barrels towards a climactic battle royal.

At this point, you may be wondering: Where’s the handsome Prince (Sam Clafin)? In this film, he’s called William, is a duke and arrives late in the game. He’s still madly in love with Snow White (they were childhood pals), but she seems only to have eyes for the Huntsman.

In the end, "Snow White and the Huntsman" is an entertaining romp with a strong sense of right and wrong. Parents should be warned that the film’s dark tone and excessive bloodshed could be nightmare-inducing for the younger set.

The film contains intense action violence and brutality, scenes of sorcery, and some mild sensuality. The Catholic News Service classification is A-III — adults. The Motion Picture Association of America rating is PG-13 — parents strongly cautioned. Some material may be inappropriate for children under 13.