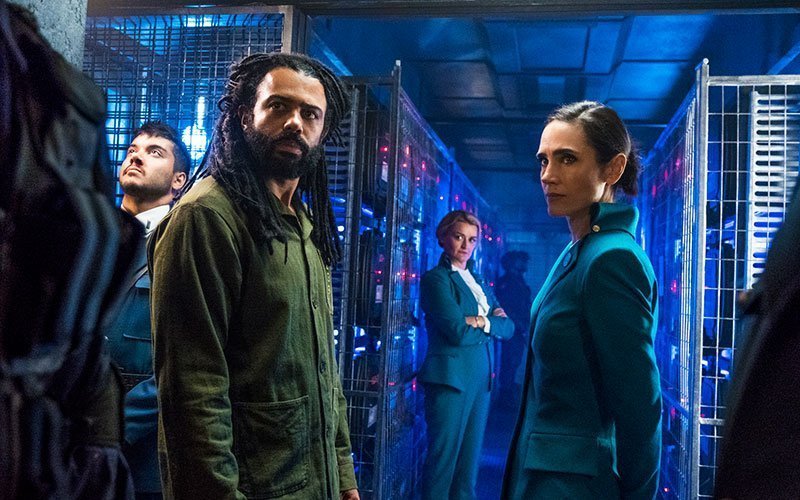 NEW YORK (CNS) — Baby boomers may remember “Supertrain,” a short-lived 1979 television series. Nicknamed “The Love Boat on Wheels,” this silly drama, set on a train chock-full of amenities, was canceled by NBC after just nine episodes.

Its dystopian cousin, “Snowpiercer,” is edgy escapist fare for our times. This well-crafted but gritty new weekly miniseries premieres on TNT Sunday, May 17, 9-10:06 p.m. EDT.

Based on the 1982 French graphic novel “Le Transperceneige” by Jacques Lob and Jean-Marc Rochette — both of whom write for this TV reimagining as well — “Snowpiercer” lists among its executive producers Bong Joon Ho, who directed a 2013 film adaptation and recently won the Academy Award for Best Picture for “Parasite.”

Viewers should be aware that this version of “Snowpiercer” follows through on its graphic novel pedigree with gory violence and torture, straight and gay sex scenes, rear nudity and crude language.

The 10-episode show, helmed by an ensemble of directors, is a parable — rather heavy-handed at times — about the consequences of climate change. Seven years after the earth has become an uninhabitable frozen wasteland, the remnant of humanity (roughly 3,000 people) is aboard a 1,001-car train which endlessly circles the globe.

For reasons not entirely clear, the train must never stop, nor slow down, or it will instantly freeze and kill all on board — a kind of quarantine for all passengers.

The mysterious (and unseen) “Mr. Wilford” built the train and sold three levels of tickets. Thus the train is heavily stratified, from the rarified luxury of first class (which includes an art gallery, bowling alley, aquarium and all the sushi you can eat) to the middling accommodations of second class. The worker bees reside in third class.

Seven years before, when the train was ready to depart, a mob stormed the platform and occupied several of the rear cars. Residents of this so-called “Tail” section, cut off from the rest of the train, suffer sickness and starvation (cannibalism is rife) and hatch plots to gain their freedom.

Keeping the train running smoothly is Melanie (Jennifer Connelly), the steely head of hospitality. Her daily announcements over the intercom may sound soothing, but she harbors a caboose load of secrets as she tries to keep class warfare at bay.

“A balance of need and greed and speed” is how Melanie describes her mission. “The needs of the train are more important than our happiness.”

Intriguingly, spirituality is not absent. Tail residents regularly pray to God for deliverance. But paying passengers consider Mr. Wilford a kind of deity, delivering them from extinction. “The engine will provide” is a common mantra, and when people die, a moment of silence is observed for their “spark.”

Meanwhile, unbeknown to passengers, there’s a gruesome serial killer on the loose, who dismembers his victims and keeps their private parts as a trophy.

The only homicide detective on board resides in the Tail section. Andre (Daveed Diggs) is a revolutionary to the core. He reluctantly agrees to assist Melanie in catching the killer, hoping he can then negotiate an “uptrain” move for his people.

“Snowpiercer” morphs into a twisted version of “Murder on the Orient Express” as Melanie and Andre strike an uneasy alliance. But Andre soon discovers that there’s a seamy underbelly to life on board, an active black market in sex and drugs and a vicious police force, the Brakemen, who put their victims on ice, literally.

As it barrels along its frosty track, “Snowpiercer” is fast-paced and full of surprises, although not all of them are pleasant.

In first class, for example, psychotic teen L.J. (Annalise Basso), who admires the serial killer, is doted on by her parents. Her father, Robert (Vincent Gale), knows how to calm her down when she throws a tantrum: He pops out his glass eye, which L.J. then sucks on with pleasure.