Soccer star delights in her success, but says faith keeps her grounded

The youngsters responded by quickly taking to the field at Nerinx Hall High School in Webster Groves, organized into groups for shooting, dribbling and passing drills.

Similar positive reinforcement must have worked on Chalupny -- the Nerinx alumna is a midfielder with the U.S. women's national soccer team competing in the World Cup games in Canada.

In Vancouver, British Columbia, the U.S. women beat Nigeria 1-0 June 16, allowing the Americans to win their group and advance to the elimination round. Their next game was scheduled for June 22 against another group's third-place team. Later that week they also faced a possible matchup against Cameroon or China.

Her No. 5 is retired at the Catholic high school where she played varsity for four years, helping the team to an undefeated regular season as a junior. An honor-roll student, she was named a Parade magazine soccer All-American as a junior and senior and an all-state selection her last three years.

She was captain at the University of North Carolina and led the team to a national title her sophomore year. Despite her travels with national and pro teams, she is a St. Louisan at heart. "I love St. Louis. I come back here every chance I get."

She was thrilled to play at Busch Stadium with the national team in an exhibition game against New Zealand in April in front of 35,000 fans. Chalupny scored a goal in the 4-0 win.

"St. Louis always supports sports and its hometown people. I really, really felt that during the game," she recalled.

Her appearance at Nerinx May 19 was part of a campaign by national team members to encourage young people to follow their dreams and work hard for their goals. 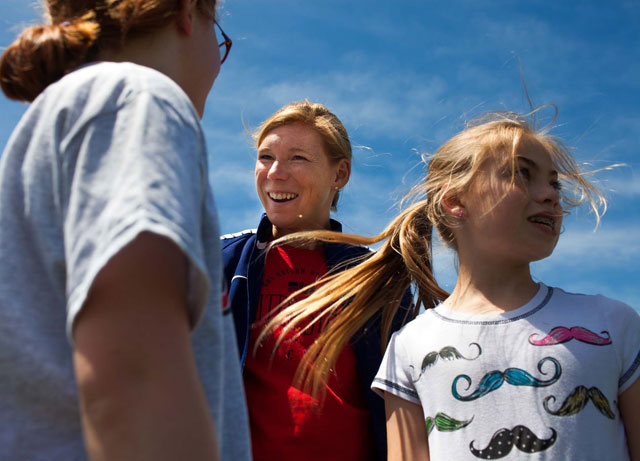 Lori Chalupny, a midfielder with the U.S. Women's National Soccer Team competing in the World Cup in Canada, instructs fourth- and fifth-graders on a field at Nerinx Hall Catholic High School in St. Louis May 19.

"It's great that I'm able to share that message at Nerinx because that's where I started to really believe in my dreams," Chalupny told the St. Louis Review, newspaper of the Archdiocese of St. Louis. "The atmosphere, staff, administration and everybody here is really supportive of (young people) following their dreams."

Having grown up in St. Joseph Parish in Manchester, she said her faith plays "a huge role" in her life as an athlete. "Having this belief that everything happens for a reason ... and that there's a greater purpose takes the pressure off of the day-to-day ups and downs of playing an elite sport."

She joins her teammates for Bible studies before every game, a chance "to remind ourselves that there's much bigger things than soccer games and that we were given these gifts that we're going to try to enjoy and share with others. Also, it brings the team closer together to share faith-based things."

The 31-year-old member of Nerinx's class of 2002 advises students that "it is important to have passion, and once you figure that out, go for it with everything you've got. I had a passion for soccer since I was very young, but it wasn't about making the national team, really. It was about enjoying the experience and playing with my best friends. As a result, with the passion I had, I was able to play at a high level. It's about the journey, not the expectations."

One of the places she played with the soccer team that stands out most is South Korea, near the border with North Korea. The situation there where military conflict is always a possibility "puts it all in perspective," she said.

She also has fond memories of Beijing, where she helped the U.S. to a 1-0 overtime win over Brazil to win the gold medal in the 2008 Olympics.

Allison Smith, a 2015 graduate of Nerinx, helped organize the clinic for the grade-schoolers. Smith, who went to Chalupny's game at Busch Stadium, said the fellow Nerinx grad "has represented us so well."

Chalupny is considered the greatest women's soccer player to come from St. Louis.

Angie Woods, a physical education teacher at Holy Redeemer and graduate of Nerinx, said Chalupny "definitely is a positive role model. The students have been following her progress, and you could tell she's excited to be here, too." Ellie Girsch, one of the Holy Redeemer students, said she will remember the experience of being with the star player. "I like how she knew how to handle kids, was always happy and helped us with the drills," she said.

Kenny is a staff writer at the St. Louis Review, newspaper of the Archdiocese of St. Louis.

Copyright © 2015 Catholic News Service, Inc. All rights reserved. Linking is encouraged, but republishing or redistributing, including by framing or similar means, without the publisher's prior written permission is prohibited.