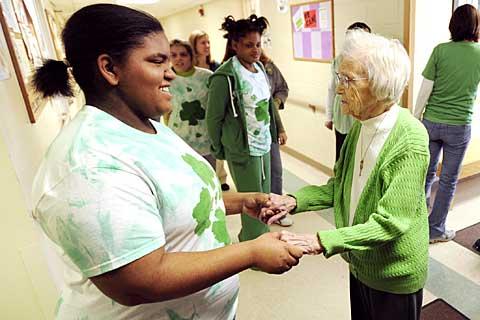 More than 15 years later, Mary Hannick remains incredulous when she recalls that Catholic Charities staff members asked whether she minded if they named a Newark rehabilitation facility after her.

"Do you mind?" she recalled thinking. "What an honor! What a privilege!"

Hannick Hall, a Newark residence for preschool-aged children and their mothers who are recovering from substance abuse, pays tribute to its namesake’s decades of service to those in need or facing crisis.

Hannick explained that settlement houses were started as a way to help immigrants assimilate into American society during the waves of U.S. urban immigration in the late 1800s and early 1900s.

"(A settlement house) does anything the neighborhood needs," she said.

According to a Harvard University library project on immigration and acculturation, middle-class reformers opened the first settlement house in London in 1884 to provide social services and education. The first U.S. house opened in New York City in 1886.

One of the most famous settlement houses was Hull-House in Chicago, which offered instruction in history, art, literature, the English language, sewing and cooking while at the same time providing such social services as a child-care center, public kitchen, homeless shelter and bathing facilities. Jane Addams, the first American woman to win the Nobel Peace Prize, and Ellen Starr opened Hull-House in Chicago in 1889. Although Hannick, a Chicago native, never got a chance to meet Addams, who died in 1935, she said Addams’ spirit helped guide her own work.

Barry modeled the settlement house on her experience working in Washington, D.C., with Catholic social worker Mary Virginia Merrick, founder of the national Christ Child Society as well as a settlement house. In its beginning years, Charles House offered supervised recreation, mothers’ clubs, hygiene classes, a medical clinic, catechism classes and a library. Funding for the settlement house came from the Community Chest, the forerunner of the United Way.

After several moves, Charles House came to be located at 445 Jay St., and the building also was used for Masses and religious instruction until 1929 when St. Francis of Assisi Church and its hall were opened on Whitney Street.

After a series of leadership changes, Director Marion Burke (1926-32) helped guide the settlement house through dramatic growth. The house offered participants the use of its library and gymnasium; opportunities to take part in recreational, entertainment, Scouting and educational programs; classes in handicrafts, sewing, cooking and dramatics; and public baths. More than 18,000 people participated in programs at the house each year.

In 1935, Hannick was hired through a New Deal program and assigned to be a girls’ worker at Charles House, which was then run by Director Elsie Strebler.

"They had hired me and assigned me to work at Charles Settlement House," Hannick said. "But like all good government programs, the program was eased out."

Fortunately, Catholic Charities found a way to keep Hannick at the house even after the program ended. Soon after, Strebler left to get married because in those days, Hannick explained, only unmarried women were allowed to work for Catholic Charities’ settlement houses. Hannick had hoped to be promoted to the "head worker" position but Father Walter Foery, the diocesan director of Catholic Charities, was not interested in her for this position.

Then, as Hannick likes to say, the pope intervened. In 1937, Pope Pius XI tapped Father Foery to be the fifth Bishop of Syracuse. Replacing him as Rochester Catholic Charities director was Msgr. Gerry Lambert, who with Father Joseph Vogt, assistant director of social action for Catholic Charities, subsequently hired Hannick for the position of executive director/head worker.

Hannick left Charles House in 1944 to work as a personnel counselor for Eastman Kodak Co. and then volunteered to go overseas with the Red Cross, working during World War II in hospitals in France and Germany.

Hannick said she was originally turned down when she applied to go overseas with the Red Cross because she weighed only 98 pounds. She bulked up by drinking a lot of milkshakes and eating lots of food. She applied again after gaining weight, and took some extra measures to make sure she would make the cut.

"I stuffed my pockets full of stuff in case they weighed me again," Hannick said.

Although she was prepared, the Red Cross didn’t weigh her the second time, and she was sent overseas to work in Europe.

Upon her return, Hannick planned to go back to Kodak, but upon the insistence of Msgr. Lambert, she resigned from Kodak and became the executive director at Genesee Settlement House in 1947.

Had she not listened to Msgr. Lambert, she probably would be much richer in material things, she noted.

Instead, "I am much richer in people," she said.

Genesee Settlement House had been formed as the Genesee Institute in 1924 from a Big Brother Club in the Bay Street area operated by the Knights of Columbus. As the Genesee Institute, it aimed to address the area’s lack of recreational and social facilities for youths and adults. Its activities became located at 347 N. Union St., and a satellite center was headquartered about a half a mile away at 270 Merrimac St.

In 1930, the organization was renamed Genesee Settlement House, and it began to expand its programming for young adults at this time. Classes in cooking and sewing were added to the recreational and social programs offered.

When the Great Depression hit, the settlement house’s budget suffered severe cuts as local leaders focused on meeting basic needs rather than offering character-building and recreational activities. Yet a rise in crime and juvenile delinquency helped advocates to secure an expansion of settlement house activities in the early 1940s, and salaries for staff were paid by the Works Progress Administration and the National Youth Administration, using state and federal funds.

Due to the efforts of Father Joseph Vogt, Genesee Settlement House moved in 1939 to 10 Dake St. in the former Our Lady of Sorrows church and rectory. The remodeled facilities featured a gymnasium, auditorium, game rooms, craft rooms, classrooms, a dining room, kitchen, library and a workshop for wood, metal and plastic crafts. In 1941, all activities from the Merrimac Center were moved to the Dake Street location as well.

Activities at the settlement house ran from 9 a.m. to 10 p.m. and included handicrafts, photography and library work; drama clubs and glee clubs; Scouting; social dancing and games; and an athletic and health group with basketball, baseball, swimming, games and gymnastics classes.

Hannick said one of her most important tasks was guiding the efforts of settlement-house participants. For example, Hannick recalled a day that six boys from the settlement house decided to start a club to learn all the words in a dictionary. Although they didn’t get too far on the task, they did collect $6.36 in dues, and as they disbanded the club, told Hannick they wanted to give the money to some poor children.

"These were settlement house children," Hannick remarked, noting their own poverty as well as their generosity.

She arranged to have the boys meet with Dick Miller, the head of the Community Chest, so the boys could give him their donation in person. Though she had given Miller’s office few details about the donors or the size of their donation, Miller did not register surprise when the young boys appeared in his office.

"He handled it just as gracefully as the million-dollar check he got that year from Kodak," Hannick recalled.

The settlement house also taught its neighbors how to organize as a community for such initiatives as getting a traffic light installed at the corner of Central Park and Union streets.

The settlement house also offered day camps and swimming during the summer, she said, and its camps drew about 250 children ranging in age from 5 to 12.

She recalled one summer morning after the 1964 race riots broke out in Rochester. Young people were unsure whether a planned camp trip to Watkins Glen was still going to happen, she said.

"My telephone started to ring. ‘Are we still going to camp?’" Hannick said. "‘Yes, we are going to camp.’ It was a different kind of camp organization. Everybody was hobbly wobbly because of what had happened the night before."

One 12-year-old was troubled because his friend hadn’t shown up yet. When his friend finally arrived during the opening ceremony, the two — one black and one white — hugged deeply.

"Two 12-year-old boys showed that whole organization how to get along together," Hannick remarked.

She is proud of the close ties she formed to many communities of all different races and ethnicities. One family treated her like their second mother, and she has maintained close ties with that family over the years.

"They were my children, and they knew it," Hannick said. "At the same time, I expected nothing but the best."

A current settlement house worker said Hannick set the standard through her commitment to the people she served.

"Her absolute passion to help people is just amazing," said Scott Benjamin, president and CEO of Charles Settlement House. "Even though I never knew her when she was still working, it comes through in every story you hear."

After Hannick’s retirement in 1971 after 25 years at Genesee Settlement House, that organization went through major changes. It incorporated separately from Catholic Charities in 1978, and its ties to Catholic Charities were officially cut in 1984. It later merged with Lewis Street Center and Eastside Community Center to form Community Place of Greater Rochester.

Charles Settlement House also incorporated separately from Catholic Charities in 1978 and was fully independent by 1987. After expansions in the 1990s following a strategic-planning campaign and a major expansion in collaboration with the United Neighborhood Centers of Greater Rochester, the settlement house continues to try to meet neighborhood needs, Benjamin said. The organization has an annual agency budget of $1.2 million and about 30 full-time, part-time and seasonal staff members. Funding sources include the United Way of Greater Rochester, grants, income from renting its community center and donations.

Following expansions in the 1990s, Charles Settlement House now has a community center on Parkway Avenue, and human-services and activity centers on Jay Street. The agency’s territory includes the northwest section of Rochester, including the areas around Lyell Avenue and Maplewood.

"The bulk of our service in this area is to address very persistent, entrenched neighborhood poverty," said Benjamin, a parishioner of Fairport’s St. John of Rochester Parish and a member of the Catholic Courier’s board of directors.

Today Charles Settlement House helps families cope with emergency crises, offering social activities, health and wellness services, and services to improve the physical and social health of the neighborhoods surrounding it. Benjamin said that one of a settlement house’s greatest strengths is its ability and flexibility to help an entire family — across generations.

"More than ever, we need one place in a neighborhood for people to hang on to," she said.