Sodus Point chapel has closed, will be put up for sale - Catholic Courier 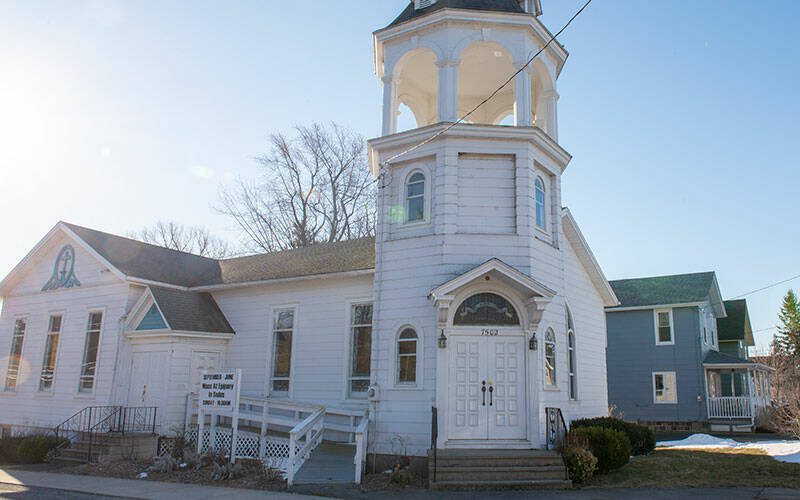 St. Rose of Lima Chapel in Sodus Point has been permanently closed and is now allowed to be sold. (Courier file photo)

Memories roll in like the tide when Corey Ginett starts thinking about St. Rose of Lima Chapel in Sodus Point.

The peace she felt as she walked to Mass with her husband and their young sons every Sunday morning.

The way neighbors and summer visitors came together as one in the small church.

The effort it took each year to wrestle a Christmas tree into the church’s large, open bell tower.

This year, there is no Christmas tree in the bell tower overlooking the intersection of Lake, Bay and Fitzhugh streets, and there hasn’t been one for quite some time. The chapel closed a year ago and is no longer being used for Catholic worship, according to a decree of relegation issued last fall by Bishop Salvatore R. Matano.

The building will be listed for sale soon, noted Father Symon Peter Ntaiyia, pastor of St. Maximilian Kolbe Parish, which formed in 2009 through the merger of St. Mary of the Lake Parish in Ontario with Sodus’ Church of the Epiphany and its mission, St. Rose of Lima.

The mission chapel’s relegation and likely return to secular use brings the building full circle. Constructed in the 1800s and originally known as Lummis Hall, it was a town hall of sorts, with Masses celebrated there occasionally, Father Ntaiyia said. In 1885, sisters and converts to Catholicism Rose and Georgette Lummis gifted the building to Bishop Bernard J. McQuaid, who blessed it and named it after St. Rose.

At first, the chapel was a mission of St. Michael Parish in Lyons, but when Church of the Epiphany opened in 1922, it became a mission of the Sodus parish. For many years, it welcomed year-round residents of Sodus Point as well as vacationing Catholics who were visiting summer cottages along the lakeshore.

Ginett, one of those year-round residents, said she always enjoyed seeing visitors sitting next to her neighbors in the pews at St. Rose.

“I always felt like we were evangelizing to (vacationers) by having a church there. A lot of them might not go to church if there wasn’t a church right there,” Ginett speculated, noting that some vacationers arrived at their cottages by boat, and may not have been able to attend Mass if the chapel hadn’t been in walking distance.

“I think people enjoyed it because it was small, it was homey, it was just a nice place to go. It was quaint, and it was very pretty inside,” Ginett said.

The chapel was open for Sunday Masses year-round when Father Ntaiyia became parochial administrator for St. Rose and Church of the Epiphany in 2006. After taking on the pastorate of those churches as well as St. Mary of the Lake in 2007, Father Ntaiyia was unable to preside at weekend liturgies at all three churches, so he asked other priests in the area to help provide coverage for the Sunday-morning Masses at St. Rose 10 weeks each year, from July 4 through the second weekend of September.

Father William Michatek, a senior priest who resides in nearby Port Bay, and several other priests willingly answered the call. But as the years went on it became increasingly difficult to find priests to fill in at St. Rose, Father Ntaiyia said.

To make matter worse, he added, mold was discovered in the basement at St. Rose a few years back. Father Ntaiyia had the mold cleaned, but it reappeared a short time later, this time spreading up into the main floor of the church. As a result, the building was deemed unsafe to occupy, and experts in mold removal and mitigation informed Father Ntaiyia that it likely would cost $100,000 to rectify the situation.

The parish did not have money to undertake this project, especially considering the ongoing challenge of finding priests to preside at weekend liturgies and the year-round cost of maintaining a building used for just 10 weeks, Father Ntaiyia said.

After much consultation with the parish’s pastoral and finance councils, Father Ntaiyia recommended to Bishop Matano that St. Rose of Lima Chapel be closed. Bishop Matano and the diocesan Presbyteral Council agreed, and on Oct. 21, 2020, the bishop issued the decree of relegation, effective Nov. 20, 2020.

“We followed all the steps possible, and we did our best to try and save the situation,” he said, acknowledging that selling the chapel may be painful for members of the community. “Understanding doesn’t take the pain away.”