Solomon asks God to give him a wise heart - Catholic Courier 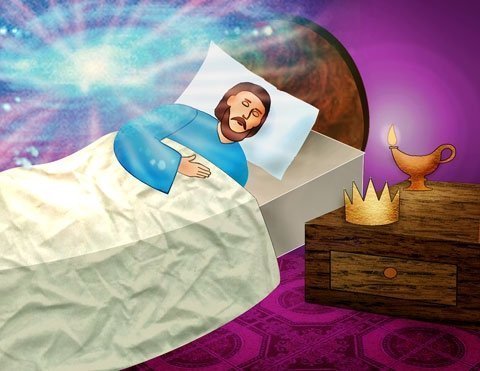 Solomon loved the Lord and would often offer sacrifices to him. Any offerings that were given to the Lord or any incense that was burned had to be done on one of the high places because there was no temple. When Solomon was in Gibeon to offer his own sacrifices, the Lord appeared to him in a dream during the night. The Lord said to Solomon, “Ask something of me and I will give it to you.”

Solomon thought carefully before he made his request. “O Lord, my God, you have made me, your servant, king <#133> but I am a mere youth, not knowing at all how to act. I serve you in the midst of the people whom you have chosen, a people so vast that it cannot be numbered or counted. Give your servant, therefore, an understanding heart to judge your people and to distinguish right from wrong. For who is able to govern this vast people of yours?”

God was very happy that Solomon had made such a request. He said to Solomon, “Because you have asked for this <#151> not for a long life for yourself, nor for riches, nor for the life of your enemies, but for understanding so that you may know what is right <#151> I do as you requested. I give you a heart so wise and understanding that there has never been anyone like you up to now, and after you there will come no one to equal you.”

As if it were not enough that God said he would give Solomon the wisdom he had asked for, God gave him more than that. “In addition,” the Lord said to Solomon, “I give you<#133> such riches and glory that among kings there is not your like. And if you follow me by keeping my statutes and commandments, as your father David did, I will give you a long life.”

When Solomon woke up, he immediately went to Jerusalem and made a peace offering to the Lord by the ark of the covenant, then held a feast of celebration for all of his servants. During Solomon’s reign as king he showed many examples of the wisdom that God had given to him, and the people of Israel were amazed. They knew that Solomon was a very special king that God had blessed in many ways.

Q&A
1. What did Solomon ask God for?
2. What did God give Solomon in addition to what he had asked for?estors who ate the manna from heaven?