Solomon builds a temple for the ark - Catholic Courier 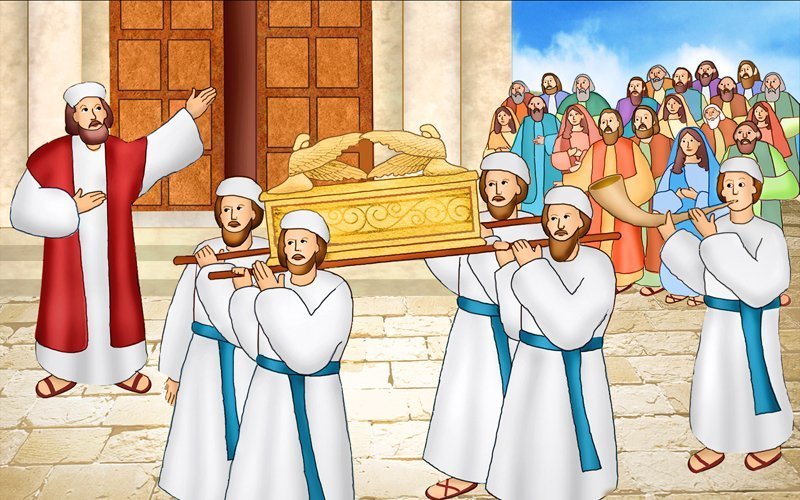 Solomon builds a temple for the ark

Solomon builds a temple for the ark

When King David moved to Jerusalem, he had the ark of God brought to the city.

The ark was housed in a tent, as it had been when Moses and the Israelites were wandering in the desert.

But David thought the ark should be housed in a much better dwelling and wanted to build a temple for it.

God had other plans, however, so he told the prophet Nathan to give David a message about the ark.

God was referring to David’s son, Solomon. After becoming king, Solomon began preparing the materials that would be needed to build a temple for the ark.

The actual construction of the Temple began in the fourth year of Solomon’s reign, which also was the 480th year since God had freed the Israelites from slavery in Egypt.

As the Temple’s construction was nearing completion, the word of God came to Solomon.

“As to this house you are building — if you walk in my statutes, carry out my ordinances, and observe all my commands, walking in them, I will fulfill toward you my word which I spoke to David your father. I will dwell in the midst of the Israelites and will not forsake my people Israel,” God told the king.

When the Temple was finished, the priests took up the ark and began moving it to its new dwelling. As the ark was being moved, King Solomon and the entire community of Israel gathered before it and made many sacrifices.

The ark was carried to the inner sanctuary of the Temple. Then the glory of God, in the form of a cloud, filled the Temple.

“The Lord intends to dwell in the dark cloud; I have truly built you a princely house, a dwelling where you may abide forever,” King Solomon said.

The king then turned and blessed the whole assembly of Israel.

1. Whom did God want to build a temple for the ark?

2. Where was the ark housed when it was first brought to Jerusalem?

ESSAY: God said that he would grant Solomon anything he wanted. If you could ask God for anything, what would it be?

What was the ark of God, and what was in it?

In Exodus 25, we read that Moses went up Mount Sinai to talk to God. God told Moses that he wanted a sanctuary made for him so he could dwell in the people’s midst.

For 40 days and nights, God gave Moses detailed instructions about building the sanctuary and creating everything that was to be in it.

The ark was to be carried using gold-plated acacia poles that would go through gold rings attached to the ark’s sides. The poles were to remain in the rings and never be removed.

A cover of pure gold also was to be made for the ark, and two cherubim of beaten gold were to be placed on each end of the cover. The wings of the cherubim were to spread out and shelter the cover.

God also told Moses to place something special in the ark: the stone tablets on which God wrote down the Ten Commandments, his covenant with the Israelites.

That is why the ark of God is oftentimes referred to as the ark of the covenant.

St. Francis-Regis Clet was born in France in 1748. When he was 21, he joined the Lazarists and taught theology and served as a novice master.

In 1791, he realized his dream of becoming a missionary in the Far East, serving in China for 30 years.

In 1818, all foreign missionaries in China were persecuted. Francis-Regis evaded arrest for a time but was eventually caught. He was imprisoned and tortured, and he was killed in 1820.

Using the hints provided, put a T next to the sentences about Solomon’s life that are true and an F next to the ones that are false.