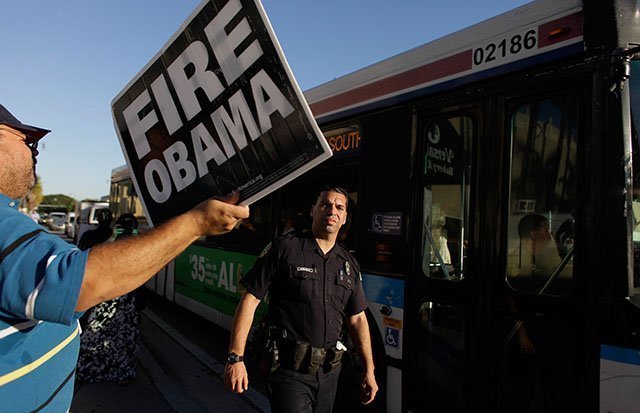 Anti-Castro activists protest in Little Havana in Miami Dec. 17, following news that the U.S. will restore full diplomatic relations with Cuba and open an embassy in Havana for the first time in more than a half century. The news rippled through the 1.5-million-strong community of Cuban exiles in the United States, many of them lifelong opponents of communist rule.

MIAMI (CNS) — Cubans in South Florida reacted with both joy and skepticism to the news that Cuba and the United States would start working toward normalizing relations and ending the economic embargo imposed by the U.S. 54 years ago.

"Blessed be God. What a miracle!" said Rosario Bergouignan, a former employee of the Miami archdiocesan metropolitan tribunal and one of the "historical exiles" — those who left in the first waves in the 1960s. She first returned to Cuba in 1998, during St. John Paul II’s historic visit to the island.

That visit helped to change Bergouignan’s mind about the effectiveness of the embargo and inspired her to travel back to the island a number of times on humanitarian missions.

"What’s the point of having the people suffer for nothing?" she said of the continuation of the embargo, which has not succeeded in toppling Cuba’s communist government.

Both the U.S. and Cuban bishops have maintained that the policy of economic sanctions and non-engagement hurts the Cuban people more than the government leaders who oppress them.

And it was through the intervention of St. John Paul’s successor — Pope Francis — that the latest breakthrough in negotiations appears to have occurred.

"Both President Obama and Raul Castro expressed appreciation to the role of Pope Francis in making possible what seems to be a real game changer in the historically strained relationship between Cuba and the United States," said Miami Archbishop Thomas G. Wenski in a statement.

He added: "Pope Francis did what popes are supposed to do: Build bridges and promote peace. He acted much like his namesake, Francis of Assisi, who during the Fifth Crusade, went to Egypt to meet with the Sultan al-Kamil in the interest of peace."

The pope seems to have relied on Havana Cardinal Jaime Ortega to convey messages between President Barack Obama and Cuban leader Raul Castro that resulted in the mutual announcement by the White House and Castro Dec. 17.

The agreement freed U.S. contractor Alan Gross from a Cuban jail, along with "one of the most important intelligence agents that the United States has ever had in Cuba, and who has been imprisoned for nearly two decades," in the words of Obama. In turn, the U.S. freed three Cubans who had been jailed in the U.S. for espionage for the past 15 years.

"I do believe in my heart of hearts that we as a church have played a role in this," said Father Fernando Heria, pastor of St. Brendan Church in a heavily Cuban-American section of Miami, and himself a native of Cuba who left the island 53 years ago, at the age of 11.

"I think we need to be cautious and not put too much expectations on what is transpiring. These are baby steps — major baby steps — just as were done during the Nixon years with respect to China and pingpong diplomacy," Father Heria told the Florida Catholic, newspaper of the Miami Archdiocese. "Nixon also took a risk when he negotiated with China."

Father Heria noted that after St. John Paul’s visit to Cuba, bishops and priests from the island began meeting regularly with their counterparts in exile, a process that eventually grew to include laypeople on both sides of the Florida Straits — and which has led to much greater understanding between them.

"We are the same people divided by parallel histories," Father Heria noted. "The church, I believe, always has tried to play an important and positive role in this."

He added that the visit of Pope Benedict to Cuba in 2012 — following Cardinal Ortega’s successful negotiations for the release of a large group of jailed Cuban dissidents — gave "even greater momentum" to the Cuban government’s realization that "the church could be trusted" to act as a middleman.

But others were much more skeptical — and hurt by the announcement.

"I am just glad my parents, sister and her husband are not alive to feel the pain, disappointment and betrayal of today," said Hope Sadowski, an employee in the Archdiocese of Miami’s Office of Schools who left Cuba at age 14 "all by myself."

"Let’s ask the family of the four that were killed in the Hermanos al Rescate (Brothers to the Rescue) incident, when they were blown out of the sky, how they feel about those three thugs that will be free in exchange for Alan Gross, who did not kill anyone other than trying to give means for information to the Cuban people," said Sadowski.

According to the Obama administration, Gross was released as a humanitarian gesture. The U.S. "intelligence asset" jailed in Cuba was exchanged for the three Cuban agents imprisoned in the U.S.

Sadowski acknowledged that the embargo has not worked, and that at least now Cuba "won’t be able to use it as an excuse for the miserable life the poor Cuban people are enduring."

"I do hope it benefits the Cuban people," she said of the end of the embargo. But she called Obama naive for trusting the Cuban government to keep its word on political or even economic reforms.

"Is the USA going to demand that human rights are respected? Doubt it," Sadowski said.

"The question is: Is what some have called the ‘internal embargo’ changing as well?" said Father Juan Sosa, Sadowski’s pastor at St. Joseph Parish and himself a Pedro Pan — one of the 14,000 unaccompanied minors who were secretly brought to the United States between 1961 and 1963 through the intervention of the Catholic Church.

Like Father Heria, Father Sosa has taken part in the ongoing dialogue between Cuban priests on and off the island, and has traveled back to the island a number of times. He noted that economics — the end of the embargo — cannot be the only criteria for progress.

"Will this mean a new movement toward democratic elections, new opportunities for better economic development, freedom of speech, open educational opportunities different from those provided only by the state, etc.?" Father Sosa asked.

"Marxism must make room for new beginnings," he said, and Cuban leaders "must be willing to guide this important transition away from self-interests and always for the common good."

Rodriguez-Soto is editor of the Florida Catholic, newspaper of the Archdiocese of Miami.