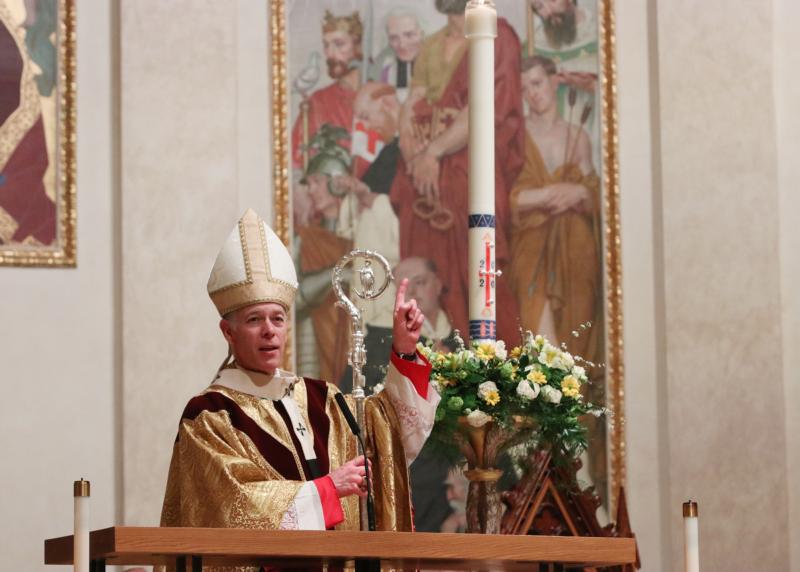 WASHINGTON (CNS) — A handful of U.S. dioceses that have not celebrated public Masses for roughly two months since the emergence of the coronavirus pandemic have now taken the first steps to reopening their parishes for Mass.

One archdiocese announcing the resumption of Masses was the Archdiocese of Portland, Oregon. Even so, there are caveats: No more than 25 at any Mass, social distancing will still be in effect, and not every parish will be prepared to restart a Mass schedule effective May 9.

Even so, Archbishop Alexander K. Sample of Portland called this “great news” in a video posted May 5 on Facebook and Twitter, asking Catholics to “have great understanding and patience at this time as we begin to transition to some level of normalcy in the life of our church.” The dispensation from the obligation to attend Sunday Mass is still in effect.

When the Archdiocese of Denver canceled public Masses March 13, “we did not foresee the suspension lasting as long as it has,” said a May 7 letter from Archbishop Samuel J. Aquila and Auxiliary Bishop Jorge H. Rodriguez. Denver, too, is reopening Masses “in a limited and gradual way,” they said, also May 9.

“Extreme caution will be used, that strict physical distancing will be observed, and that pastors will consult the guidance issued by state and local health authorities. This, of course, will mean that access to the Masses celebrated over the next few months will be very limited,” they added.

The Archdiocese of Oklahoma City and the Diocese of Tulsa jointly announced a resumption of Masses effective May 18. “Patience and a spirit of charity toward ourselves and our neighbors, particularly the vulnerable, will greatly assist in a well-ordered transition back to public Mass,” said a May 6 announcement by the two dioceses.

Three pages of the five-page announcement were devoted to an extensive list of “requirements for resumption of public Mass and sacramental life” covering hygienic practices, the responsibilities of liturgical ministers, and what to do upon entering and exiting churches.” A sheet of frequently asked questions accompanying the announcement suggested that parishes limit attendance to no more than 33% of church occupancy. It also suggested going to weekday Mass to keep churches from overcrowding.

In the Diocese of St. Petersburg, Florida, churches are to be at no more than 25% occupancy when Masses resume May 11. Masses will be held in churches only on weekday mornings; no Sunday Mass resumption was announced.

“If everyone does their part, we can be joyfully present, even as we adjust to these changes. For this moment in history, this is what we are called to do, as we honor each life given to us by God and show charity for the well-being of our neighbors,” said a May 6 statement by Bishop Gregory L. Parkes of St. Petersburg.

The Diocese of Austin, Texas, also gave the go-ahead to resume public Masses. One parish responded by holding an evening Mass May 5, according to KBTX, a television station in the diocese.

Deacon Michael Beauvais of St. Anthony Parish in Bryan, about 100 miles from Austin, told KBTX that the Mass obligation was still in abeyance. “We’re not sure how everyone feels and ultimately each member of our parish has to make a prudential judgment. Do I feel comfortable doing this?”

The Diocese of Wichita, Kansas, also plans to reopen its churches for worship the weekend of May 9-10, said spokesman Matthew Vainer.

The New York Times reported that parishes in the Diocese of Charleston, South Carolina, were planning to reopen for Mass later in May, adding some priests are organizing plans for members to attend on a rotating basis, by last name and year of birth, to limit coronavirus exposure.

Cemeteries will have limited hours, and services and visits are capped at 10 people at a gravesite at a time — since the national health emergency was announced, the limit has been two — and all must wear protective masks and maintain social distancing.

The Diocese of Brooklyn announced May 7 its cemeteries would be open May 10 for Mother’s Day.

Contributing to this story was Katie Scott, special projects reporter at the Catholic Sentinel, newspaper of the Archdiocese of Portland.