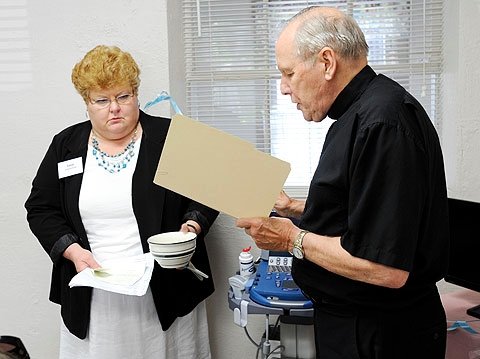 ROCHESTER — By seeing a picture of her baby and hearing her baby’s heartbeat, will an expectant mom be less likely to choose abortion?

Several area pregnancy centers believe she may be, which is why they joined the Knights of Columbus and the Diocese of Rochester in an effort to purchase a portable ultrasound machine that will be housed at Embracing Options, a local pregnancy care center on Arnett Boulevard. Embracing Options is part of His Branches, which also operates Grace Family Medicine at 340 Arnett Blvd., and Joy Family Medicine at 918 N. Goodman St. The machine was dedicated June 20.

The machine will allow area pregnancy centers to offer free informational ultrasounds through the first trimester of pregnancy, said Dee Skelton, network director of Embracing Options. These ultrasounds will help gauge the viability of an unborn child. The ultrasound pictures are also intended to educate young parents about prenatal development and show mothers the life growing inside them. The ultrasound will not be used to diagnose development problems and will not be able to determine gender, Skelton said.

"A picture is worth a thousand words, so when a woman is able to see and hear the beating heart of her child, she is more likely to bond early with her child, seek appropriate prenatal health care, carry the baby to term and be prepared for welcoming an infant home," said Jann Armantrout, diocesan life-issues coordinator, who helped to facilitate the purchase and placement of the ultrasound machine.

"They are surprised at how they are treated — we care about them," Skelton said of those who seek help from Embracing Options.

The possibility of an ultrasound gives pregnancy care centers one more service they can offer expectant mothers, noted Joan Rohr, executive director of the Birthright of Rochester Inc. chapter. Free pregnancy tests are no longer the main draw bringing young women into Birthright, because the costs of the tests has decreased to about $10, and some are even available at dollar stores, Rohr said. Instead, most are referred to Birthright through word of mouth after they already know they are pregnant. Due to the proliferation of early chemical abortions, some women don’t look for abortion alternatives or seek help from pregnancy centers, she noted.

Rohr said she hopes that more women might come to her doors if they hear about the availability of free ultrasounds.

"In the past, I’ve paid for an ultrasound, usually for a difficult case, so it’s a nice thing to be able to refer a girl for a free ultrasound," she said.

Of the $36,500 cost for the machine, supplies and five-year maintenance plan, $13,000 came from the Supreme Council of the Knights of Columbus, which is the national organization that governs the charitable organization. With the help of 14 parishes and Knights of Columbus councils, the local group raised $23,000 from fundraisers and individual donations.

"A woman called up one day, and she had heard about this. She said, ‘Where do I send you the check?’ The next day there was $1,000 in the mail," said Dean Hamingson, program manager for the ultrasound project and deputy grand knight at Trinity Council.

The machine was dedicated to Arthur J. Harris, now a member of the Knights’ Supreme Council, who was previously the state Deputy for the New York State Knights. He led an effort to raise $6,000 through a raffle for the ultrasound project, along with Tony Muscolino, then the district deputy and now the secretary/treasurer of the Knights’ Finger Lakes Conference. Later, these efforts were combined into the ultrasound fundraising project with the diocese and the Knights’ Trinity Council in Webster.

"This is about a $100,000 a year project, but with volunteers, that gets cut away real fast," Hamingson said.

The machine has been in use for training sessions recently at Embracing Options, and Skelton said the ultrasound images did make a difference with two sisters who didn’t want to be pregnant.

"They were really amazed to see it was a baby," she said.

She said in addition to helping women learn more about pregnancy, the project has fostered collaboration on the part of pregnancy care centers.

"That’s why we are doing it collectively, because we want it to get used as much as possible," Skelton said.

Hamingson said he hopes the ultrasound project won’t end with the one machine in Rochester. He hopes to make additional machines available at pregnancy care centers in other areas of the diocese, such as in Wayne County, he said.